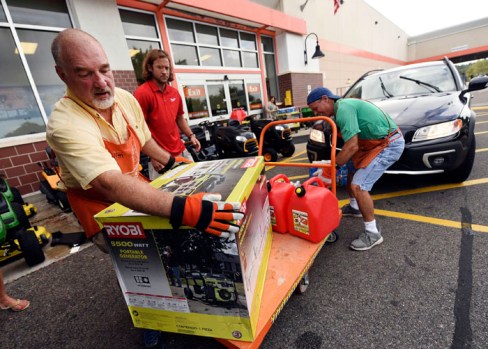 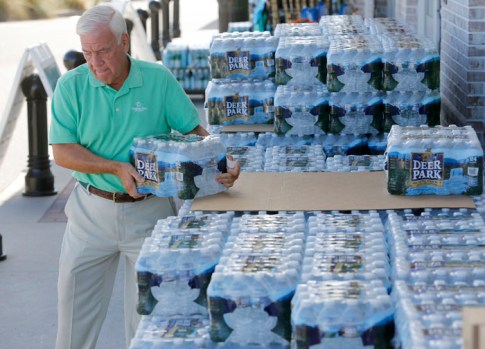 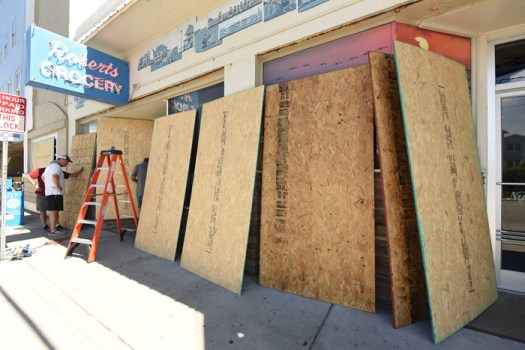 Roberts Grocery Store in Wrightsville Beach boards up windows as Hurricane Florence bears down on the East Coast on Monday. Ken Blevins /The Star-News via AP

SALISBURY — Gov. Roy Cooper has declared a state of emergency ahead of Hurricane Florence.

Local officials say being prepared is the key to enduring a lot of rain, strong winds and possible power outages.

According to weather forecasters, Florence is a major Category 4 hurricane and will likely strike the East Coast on Thursday, on track to come ashore near Wilmington.

“I would definitely prepare for at least prolonged power outages because of the winds being so strong when they come through here and localized flooding,” said Steve Monday, chief forecaster of Rowan County Weather.

Monday said by the end of the week, the hurricane will potentially be a Category 1 with winds from 40 to 75 mph.

For Rowan County residents who recall Hurricane Hugo in 1989, Florence is a comparable storm and could have the same impact, he said.

“It’s the strongest hurricane to ever make landfall in North Carolina,” Monday said.

Monday suggests that while people are out buying extra supplies, they remember to get extra food for pets and to check on elderly neighbors. He said if the storm’s damage is not severe locally, people should consider donating unused items to people in places that take a stronger hit from the hurricane.

Often during severe weather, people rush to stores to buy nonperishable foods, batteries and other items, which inevitably leads to empty store shelves. A Food Lion spokesman said the company understands that people will flock to stores and is working to keep its stores stocked.

Matthew Harakal said the projected path of the hurricane is in the middle of Food Lion’s service area.

“We are moving fast and furious to get stores restocked,” he said.

Most customers are buying batteries, water, milk, bread and other staples.

Food Lion has two distribution centers along the coast in Raleigh and South Carolina, both of which are extremely busy and running around the clock.

Food Lion has a weather plan that could include using a refrigerated truck in the event a store loses power.

“There’s a bunch of different steps we go into depending on the need and the path of the storm,” Harakal said.

The company is assessing the needs of individual stores.

“We are working as hard as we can and as fast we can,” he said.

Walmart is also sending reserves to stores as people scoop up water and other supplies.

“Customers are buying what you would typically expect,” said Walmart spokeswoman Tara Aston.

The company has teams set up to meet the demands and a plan for specific distribution centers throughout the country to keep supplies in stock, Aston said.

“We have an emergency operations center fully engaged right now. We are working with all of our various teams, working to make sure we are as prepared as we can be,” she said.

For customers who fear supplies will be depleted, Aston said, trucks are still running to keep stores stocked.

Officials recommend having on hand a flashlight, extra batteries, nonperishable foods, a manual can opener, a gallon of water per person per day for at least three days, prescription medication, baby items (formula, diapers, wipes, bottles), and cash.

The city of Salisbury started its preparation for Hurricane Florence with a Monday a meeting of weather-essential personnel.

The city took other steps to prepare:

• Trucks and equipment have been checked and repaired, if needed.

• Chain saws have been sharpened, oiled and tested.

• Plans have been made to adjust employee schedules to assure continuous staffing, as well as have additional staff on standby.

• Essential staff will report to work as the storm approaches to begin monitoring the “Street” radio channel for road conditions.

According to public services, the removal of downed trees will start with emergency and primary routes, then secondary routes.

Novant Health Rowan Medical Center is making extensive preparations for what could be life-threatening conditions.

“We are working closely with state and local partners, including N.C. Healthcare Preparedness Coalitions and emergency management officials, to ensure that our team members, their families, our patients, and our community will be cared for regardless of the weather,” said Jennifer McQuilken, public relations manager.

Novant Health is increasing staffing levels, obtaining extra supplies and medications, topping off gas tanks, cleaning exterior drains, and securing loose items. Water, food, medications, linen and other necessities have been stockpiled, making the hospitals some of the most prepared facilities in the region, she said.

“We encourage our neighbors to stay alert to changing conditions and follow the advice of their local emergency management officials,” McQuilken said.