Persimmons have a lot of history to chew on 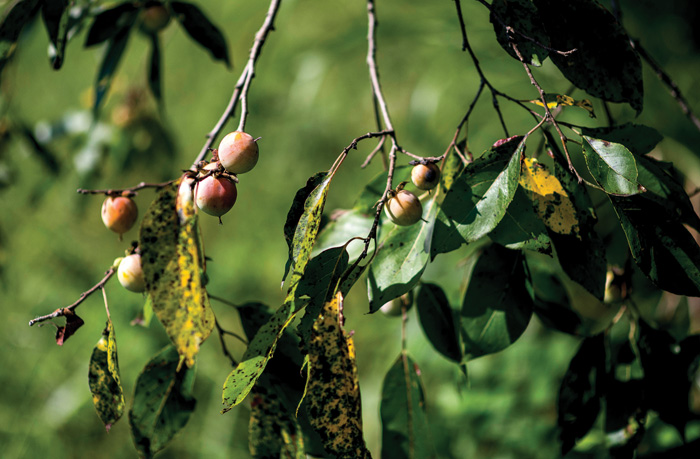 JON C. LAKEY / SALISBURY POST A persimmon tree near the railroad tracks at the end of East Franklin Street in Salisbury loaded with nearly ripened fruit.

Editor’s note: Dr. Gary Freeze, professor of history and American cultural studies at Catawba College, is possessed by persimmons in light of Germanfest, coming Saturday to the Old Stone House.

North Carolinians rank high among Americans who retain a traditional devotion to picking persimmons and putting them in pudding. As long as Tar Heels were by and large an agricultural society, “with the corn shuckings came persimmons puddings.”

In the fall, folks went out to the edge between forest and field to forage for the orangey globes. (So prized were they in some parts of the state that newspaper editors were known to accept them as subscription payments.)

The experienced pickers knew to wait until the first killing frost, to soften both the pulp and palpability. An unripe persimmon does not an edible pudding make, for the astringency in the fruit will pucker the mouth and ruin the charm. I have tested this principle scientifically.

The oldest local references to persimmon picking go back to the colonial period. There is even a legend I found in Cabarrus County that pioneer settler Percy Simmons was single-handedly responsible for the name of the fruit. “Before this, these berries were named possum timber,” claimed one Concord wag. Simmons was said to have moved from tree to tree, subsisting on them for months. When a dry season kept the fruit green, he supposedly stomped off to live in Georgia.

There are also references to recipes going back to Jeffersonian days, including prizes given out for the best pudding at fairs in Fayetteville and Raleigh, but none that I found in our Salisbury papers.

And there was the rural custom of making “persimmon beer,” said by its admirers to provide a winter tonic without the effects of alcohol. Most home brewers augmented the pulp with either wheat bran or corn meal, and often boosted the flavor with honey locust pods. The mash was made in a barrel placed in a cold shed, and when the foam had died down — usually the week after Thanksgiving — the neighbors would be called over to sample “a most elegant non-intoxicating drink.” I have yet to test this scientifically.

The oldest recipe I’ve found came out right after the Civil War. Rural Carolinians who wanted to know “how to get up a pudding” were advised “to pick up ripe ones,” sieve out the seeds, “add a little sugar and flavor,” bake “quickly,” then “when done grate some brown bread crusts and loaf sugar” over the top and put it back in the oven to finish.

More commonly, the basic recipe was a more flavorful variation of the old colonial classic, Indian pudding, with great variance in how “the proof” was put into the pudding. A large quantity of milk was essential, as well as sugar. Some folks used eggs, some eschewed them. How much thickening to add ran the gamut. A Lutheran lady near Statesville — possibly one of my Troutman neighbors — advised using enough “flour to make a medium batter like a pound cake.” In contrast, German folk near Lincolnton mixed equal parts grated sweet potato, mashed pulp, sweet milk with one egg and one meager teaspoon of flour. Everyone agrees, however, with the admonition that “the good rich flavor cannot be obtained without the long slow cooking.”

In the 1900s, farm demonstration agents out of State College provided instructions for using wild persimmons “in yeasty mixed bread, in fillings for layer cakes, crumpets — really! — and, wait for it, persimmon fudge” (It was equal parts pulp and sugar cooked over low heat, with a pinch of soda.) A Home Demonstration club officer encouraged her members to “use persimmons freely.” They were “rich in natural sugar and iron” and made a “good laxative.” I fear what the science means here.

By the late 20th century, church, fire department and other local heritage cookbooks continued to include pudding recipes, but to my knowledge, there is no restaurant in the state that does anything more than use those tame Japanese persimmons for things like ice cream or nouvelle cuisine creations. Yet, at places like the pot luck after the annual St. Andrew’s Church service at Woodleaf, I can still find the delicacy and compare that taste with childhood memories. It has always been a heavenly moment, at the first taste.

In the pudding recipe that follows, it is assumed that this early in the season, and maybe all winter (given climbing temperatures) that pulp from Japanese persimmons suffices. Pumpkin pie spice off the grocery shelf also works well.

Beth Tartan, author of “North Carolina and Old Salem Cookery,” provided this consensus version, “got up” by her family’s African-American cook:

Use a long baking dish that will allow the batter to be an inch thick. Bake at 350 degrees for about an hour, or a bit longer if needed to get a dark brown sheen on the top.

Bill Neal, in his Southern Cooking, used much the same recipe, but added a teaspoon of baking soda to balance out the buttermilk. He also put a bain marie (water bath) in the oven.

Note: One can leave out the sweet potato, or use white sugar, or like my mother — Sudie Rumple Freeze of Troutman — conclude that margarine instead of butter gives the final bake a nicer sheen.