Rose waits through a day of rain at BMW Championship 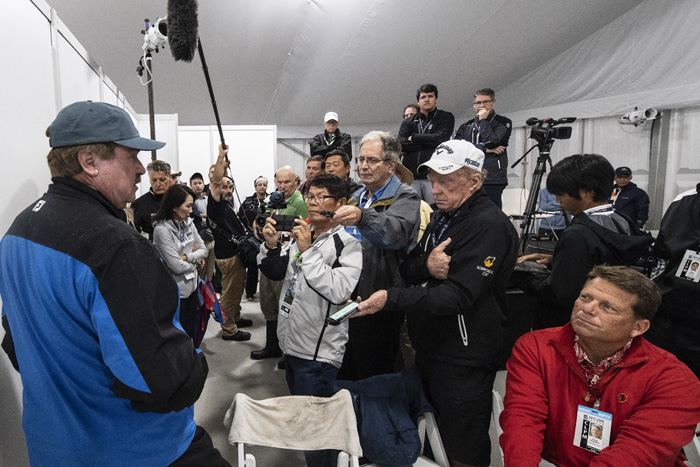 NEWTOWN SQUARE, Pa. (AP) — Two putts began taking on more significance with each rain delay until there was no golf at all Sunday at the BMW Championship.
Aronimink Golf Club already was saturated when a steady rain caused tiny streams and large puddles in the fairways, leaving the PGA Tour little choice but to wait until Monday to either play the final round or decide to cut short the third FedEx Cup playoff event to 54 holes.

“We had a golf course we couldn’t play,” said Slugger White, the tour’s vice president of competition. “We’re shoveling sand against the tide.”

Justin Rose was ahead by one shot, all because of one putt.

He was tied with Xander Schauffele on the 18th hole of the third round Saturday when Schauffele’s 8-foot par putt rimmed around the high side of the cup, giving him a bogey and Rose the lead.

Rose can go to No. 1 in the world for the first time in his career with a victory, making him the 22nd player to reach the top since the ranking began in 1986. He also would be the No. 2 seed behind Bryson DeChambeau among the top 30 who advance to the Tour Championship in two weeks, giving him a clear shot at the $10 million prize.

Keegan Bradley might be there, too, all because of one putt.

Bradley left his 50-foot birdie putt about 7 feet short on the 18th hole Saturday. He made that for par to finish the third round in sixth place, three shots out of the lead. That projects him to move up 22 spots into the 30th position in the FedEx Cup, which would bump out Jordan Spieth.

Still to be determined was whether another shot is hit — or enough of them.

“We will do everything we can to play tomorrow,” White said.

The forecast was for light, scattered showers Monday morning, with thunderstorms developing in the afternoon. The hope was that the rain would be light enough to play, and the thunderstorms would be slow to develop.

If the final round starts Monday and more than half the field completes the round, the BMW Championship would go into Tuesday if necessary to finish. If not, the final round could be scrapped and the 54-hole scores would stand.

Rory McIlroy birdied three of his last six holes, the last one on No. 18 from 40 feet, to finish one shot behind. He’d like another crack at Rose.

So would Schauffele, who believes winning might be his only hope of persuading Jim Furyk to take him with the last captain’s pick for the U.S. Ryder Cup team. Otherwise, all signs point to Finau, who was six shots out of the lead.

The pick was to be announced a short time after the BMW Championship ends, whenever it ends.

Tiger Woods, meanwhile was five shots behind after a 66 in the third round that didn’t allow him to make up any ground on the lead. He still was set for to be at the Tour Championship for the first time since 2013.

No one needs to play Monday as much as Spieth.

He had to rally for a 66 on Saturday, and while he was 11 shots out of the lead, another round would give him a chance to move back into the top 30, avoid violating a new policy and save the PGA Tour a headache.

For Spieth, it’s more than just missing the Tour Championship for the first time. If he doesn’t qualify, Spieth would violate a recent policy requiring PGA Tour members to play a tournament they haven’t been to in the last four years. They are exempt from the policy by playing 25 events.

Spieth is at 23 and needs to get to East Lake (the Ryder Cup counts as a start) to reach the magic number. No one has violated the 2-year-old policy, and the tour has not figured out a punishment.

It all starts with the weather.