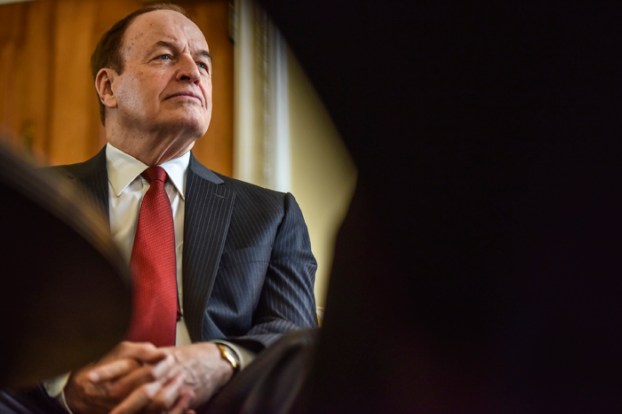 Sen. Shelby, Trump prepare for a trillion-dollar tug-of-war over the future of the GOP

Sen. Richard Shelby arrived at the Oval Office this summer with an unenviable task. The Senate was planning to give President Donald Trump only a fraction of the $5 billion he wants for his border wall, and, as head of the Senate Appropriations Committee, defending the decision fell to Shelby.

But in an encounter ripe for confrontation, the Alabama Republican led with a long windup chat about college football, defusing the tension and segueing into a conversation that — even as Shelby fended off Trump’s demands — remained amiable, according to another lawmaker present, Sen. Shelley Moore Capito, R-W.Va.

The meeting foreshadowed Shelby’s successful effort — so far — to shepherd a series of spending bills through the Senate with bipartisan support, overcoming an appropriations logjam that has bedeviled Senate leaders for years and left Congress with a shambolic budget process bemoaned by all parties involved.

But despite the cordial Oval Office conversation, Trump continues to dangle the prospect of a government shutdown if he does not get his way. And with that threat still hanging, the toughest part of Shelby’s effort is yet to come: For the Senate budget bills to become law, Shelby will need to cut a deal with House conservatives — including on border funding — that also wins over an impatient president.

It’s a struggle that goes beyond the budget, with ramifications for the future of the Republican Party and its approach to governance under Trump — a fight that pits Shelby’s pragmatic, results-oriented approach against that of firebrands who disdain compromise as caving, and a president who has demonized Democrats and narrowcast his messaging appeals nearly exclusively to his base.

And it’s all being done on a deadline: Without action from Congress, federal funding is set to run out Sept. 30. As that date approaches, Shelby is aiming to steer clear of an outcome that could prove disastrous for a Republican Party that has never looked more removed from the consensus brand of politics the easygoing Southerner represents. And if the November midterm elections usher in a new and contentious era of divided government in Washington, the politics of common ground Shelby practices could emerge as a rare oasis of comity on Capitol Hill.

It’s a hot seat, but it’s also a chair Shelby, 84, has been chasing for decades.

A spot on the Appropriations Committee was part of the reward for Shelby when he ditched the Democratic Party to become a Republican in 1994. Andrew Gray, a managing director at JPMorgan Chase & Co. who was a longtime aide to Shelby starting in 1998, said that even then “and even probably further, Sen. Shelby was counting who had to lose, retire, or otherwise get out of the way to allow him to rise to the chairmanship of the Appropriations Committee.”

The last name on that list was Sen. Thad Cochran, a Mississippi Republican who retired in April and passed Shelby the gavel.

By all accounts, Shelby, who towers over many of his colleagues at well over 6 feet tall, has made remarkable progress thus far, with the Senate already passing nine of the 12 annual spending bills, including some that haven’t been on the floor in years — all with overwhelming bipartisan support.

It was made possible partly because Congress had already agreed to overall spending levels in an earlier deal. But Democrats also credit Shelby for making a decision early on to seek bipartisan support on all the spending bills by keeping poison-pill “policy riders” off them, even if it meant he would have to vote against amendments he personally supported or inform fellow GOP senators that they could not use the bills to advance their pet causes.

Shelby met with the top Democrat on the Appropriations Committee, Sen. Patrick J. Leahy of Vermont, to agree on the strategy, and they then got approval from Majority Leader Mitch McConnell and Minority Leader Charles E. Schumer. Democrats including Leahy say Shelby’s decision to seek bipartisan agreement from the outset, and keep his word even when it meant defying fellow Republicans, is what has allowed the Senate to plow forward on appropriations in a way it hasn’t done in years.

The strategy hasn’t always proceeded without rancor. Sen. Rand Paul, R-Ky., lashed out at GOP leaders last month, accusing them of trying to block a vote on his amendment to strip funding from Planned Parenthood. The measure was ultimately allowed on the floor and defeated.

Sen. Ted Cruz, R-Texas, was foiled in an attempt to advance a provision aimed at blocking the District of Columbia from requiring residents to carry health insurance. Shelby was among a handful of Republicans voting to table the measure, saying he was doing so reluctantly but wanted to keep the appropriations process moving.

The last time all 12 appropriations bills were passed and individually signed into law was 2005. No one expects that to happen again this year, but the goal is to get at least some bills to the president by Sept. 30 and punt any undone business — potentially including a border wall funding fight — until after the election. The hope is that this outcome would satisfy Trump and he’ll sign the necessary legislation to avoid a shutdown.

But while some see progress and a return to regular order, Shelby’s critics see a cave on core principles. House conservatives are digging in for a fight.

“Obviously they’ve gotten a lot more passed than previous congresses, and that’s to be applauded,” said Rep. Mark Meadows, R-N.C., chairman of the House Freedom Caucus. “But I don’t think there’s a whole lot to brag about in terms of funding levels or conservative priorities as it relates to the product that’s coming into view.”

Meadows talks frequently with Trump, and although the congressman declined to say whether he thinks Trump would be satisfied with the legislation passed by the Senate, the president has already raised the possibility that he will not. The biggest open question is on funding for the border wall, the topic of the June meeting with Trump, Shelby and Capito, who chairs the Appropriations Committee’s Homeland Security Subcommittee.

The Senate’s Homeland Security bill includes $1.6 billion for the border wall; the House version has $5 billion, the figure Trump wants.

Candidate Trump repeatedly promised the wall would be paid for by Mexico. And Senate Democrats are extremely reluctant to go any higher than $1.6 billion that was agreed to on a bipartisan basis. When Shelby and Capito met with Trump in June, they tried to convince him that it was the best they could do to keep the appropriations process moving forward with bipartisan support.

“You can’t do things unilaterally,” Shelby said in an interview. “You know, sometimes people that want their way, they claim ‘I’m the dealmaker, it’s my way,’ or whatever. I never approach negotiations like that. I try to find out what, for example, what do the Democrats really need, and what do they want, and can we do it? And what do we need, I’m speaking of the Republicans, and can they do it, and try to work through that.

“So I don’t look at myself as a dealmaker, but maybe a veteran legislator.”

Attempts at a more confrontational style of budget negotiations have brought little beyond dysfunction. The federal government has already shut down twice this year, albeit briefly. A third shutdown was averted in March only by a $1.3 trillion mishmash of spending bills known as an “omnibus,” which lawmakers lamented and Trump first threatened to veto and then signed reluctantly — promising, after being criticized by his allies, that he would never sign a similar bill again.

In attempting to return to an earlier process, Shelby will bank on deep relationships on the Hill, forged via a mixture of dealmaking, glad-handing, and long-standing friendships in both parties.

Shelby dined late last year with former Connecticut Democratic Sen. Chris Dodd shortly after Shelby announced publicly that he would not vote for Roy Moore, the Republican Senate candidate from Alabama who lost his race.

In the same restaurant, Dodd recounted in an interview, he spotted McConnell and told him that Shelby had “just saved your party” by withholding his support for Moore. McConnell gazed it him but gave no response, Dodd said.

At the same time, Jones said: “Look, I’ve seen him,. He can cut somebody off at the knees if he feels like they need it.”

During the era of earmarks, Shelby used his Appropriations Committee seat and a highly transactional approach to steer spending back to Alabama. He said in an interview he’d like to bring back earmarks — he has been able to use federal funding to direct billions to Alabama, which remains one of the poorest states in the nation yet boasts world-class education and defense facilities. Shelby’s name graces several university buildings.

Whether he can replicate that success in Trump’s Washington remains to be seen. House Republicans are passing their own spending bills along partisan lines, hoping they can bend senators to their will later. And it remains uncertain whether Trump, who was ripped roundly by fellow conservatives for signing the last spending bill, will be willing to entertain a compromise.

This time, failure to compromise could result in a government shutdown five weeks before midterm elections that will decide control of Congress. And Shelby is hoping that prospect proves enough to bend others in his party — including the head of it — toward pragmatism.

“If we do our job and get those bills to him, I think it will work. I hope so. That’s our goal,” Shelby said. “We don’t know, ultimately, what somebody is going to do or not do.”