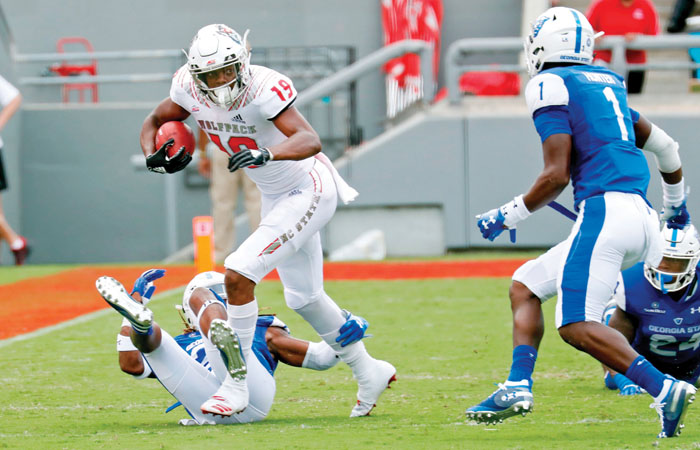 RALEIGH (AP) — North Carolina State played without one key receiver while welcoming another one back to the rotation — only to lose him again to another injury.

But the Wolfpack’s impressively deep receiving corps had Thayer Thomas, who has earned a scholarship — and, now, his quarterback’s trust.

Ryan Finley, who threw for 370 yards and two scores — including the highlight-reel TD to Thomas on the Wolfpack’s opening possession — called Thomas “trustworthy.”

“He’s special, he’s worked for it, and he’s earned the right to be on this stage,” Finley said. “And I’ve really been impressed with him.”

N.C. State (2-0) has one of the deepest receiving groups in the Atlantic Coast Conference, and that depth has been tested early.

When Stephen Louis missed the opener with hamstring tightness, Jakobi Meyers stepped up and caught 14 passes for 161 yards against James Madison.

This time, Louis was back but Meyers was out with an ankle injury — so Thomas was elevated to the starter’s role in the slot. Kelvin Harmon caught eight passes for 129 yards but Louis was hurt early in the fourth quarter after taking a shot to the helmet.

Meyers “told me all week at practice, ‘It’s your turn,’” Thomas said. “Whoever gets put in that position should be able to go out and make plays, because the slot in our offense is looked at a lot, and I feel like any receiver who’s put in this position could have done it.”

Finley, who was 31 of 38, finished with the second-best yardage total of his career — surpassed only by his 415 yards in last year’s opener against South Carolina.

COLLEGE STATION, Texas (AP) — Kelly Bryant threw for 205 yards and a touchdown and ran for another score to help No. 2 Clemson escape with a 28-26 victory over Kellen Mond and Texas A&M on Saturday night.

Mond was spectacular in the second half, throwing for three touchdowns, with a 14-yard pass to Kendrick Rogers cutting the lead to 28-26 with 46 seconds left. But his big performance came up just short when the 2-point conversion attempt was intercepted in the end zone.

The Crimson Tide (2-0) racked up big plays on the way to a 40-0 halftime lead while rotating the quarterbacks who battled for the job throughout the offseason. Coach Nick Saban officially announced Tagovailoa would remain the starter Monday, but both were big parts of the plan again.

Tagovailoa finished 13 of 19 for 228 yards and four TDs. He led seven drives and tossed in runs of 15 and 12 yards in the second half. Tagovailoa had TD passes of 58 yards to Jerry Jeudy, 31 to Henry Ruggs III and 41 to DeVonta Smith — all in the first quarter — and tacked on a 14-yarder to Derek Kief.

COLUMBIA, S.C. (AP) — Jake Fromm threw for 194 yards and a touchdown, all three of Georgia’s latest running combo scored touchdowns and the expected Southeastern Conference showdown turned into a blowout.

The Gamecocks (1-1, 0-1) came in ranked for the first time in four years, and some thought they had a chance of upsetting the defending SEC champions early in the season. Instead, the Bulldogs (2-0, 1-0) used dominating offense and suffocating defense to win their fourth straight over South Carolina.

Fromm was 15-of-18 passing, including a 34-yard TD pass to Mecole Hardman.

D’Andre Swift, Elijah Holyfield and Brian Herrien looked every bit as effective as NFL runners Nick Chubb and Sony Michel did a year ago in leading Georgia to the College Football Playoff.

Meyer was back conducting practices this week but will miss one more game — next week’s prime-time clash with No. 16 TCU — to finish out his three-game suspension for mismanaging fired assistant coach Zach Smith, who was accused to domestic abuse and other misbehavior. Co-offensive coordinator Ryan Day ran the show again and had few reasons to fret, save for the 11 penalties that cost Ohio State 131 yards.

MADISON, Wis. (AP) — Jonathan Taylor ran for a career-high 253 yards and three touchdowns, and Wisconsin asserted its dominance after allowing a score on the game-opening drive.

A.J. Taylor had 134 yards receiving and a score to help the Badgers (2-0) win their 41st straight home nonconference game. That’s the longest active streak in the FBS.

With the Lobos (1-1) down to third-string quarterback Sheriron Jones because of injuries, the Badgers converted two turnovers into touchdowns in a 5-minute span in the third quarter.

Anderson ran for 10 yards on the final play of the first quarter, and then got up slowly. He limped off on his own, and trainers tended to the preseason All-Big 12 pick before he headed to the locker room. He was back on the bench later, out of uniform.

Starting quarterback Jarrett Stidham played only into the second quarter, with the Tigers (2-0) leading 42-0. The redshirt junior finished 6 of 11 for 113 yards with a passing and rushing score.

Stidham’s backup, sophomore Malik Willis, gifted the Hornets (1-1) their first points of the night when he was sacked in the end zone on his first snap for a 4-yard safety in the second quarter. Willis directed the offense until 23-year-old freshman left-hander Cord Sandberg took the on the last play of the third quarter. Sandberg, a former minor league baseball player for the Philadelphia Phillies, completed one pass for 22 yards and ran for 35 yards on three carries.

The Irish, coming off an emotional 24-17 season-opening victory over Michigan, looked lackluster against the Mid-American Conference foe. The Cardinals (1-1) also played nothing like the 34½-point underdogs they were labeled in the schools’ first meeting in football.

After going the entire 2017 season and last week without an interception by a safety, Elliott picked off a pair of Riley Neal’s passes that the offense converted into rushing touchdowns of 31 and 1 yards by junior Tony Jones Jr. for a 21-6 lead in the third quarter.

SEATTLE (AP) — Jake Browning threw for 313 yards and two touchdowns, Ty Jones had two touchdown receptions, and Washington pulled away in the second half.

The Huskies home opener was a chance to regroup after the letdown of last week’s season opener loss to No. 7 Auburn. Browning was 23 of 37 passing with short TD passes to Jones and Cade Otton. Backup QB Jake Haener added a 12-yard TD pass to Jones in the fourth quarter.

The Cardinal (2-0, 1-0 Pac-12) got an early touchdown run by Love and then tormented Daniels much of the night, holding USC to its fewest points in this series since a shutout in 1941. Stanford took control of the game late in the second quarter with a strip sack on fourth down against Daniels that set up K.J. Costello’s 9-yard touchdown pass to Colby Parkinson that gave Stanford a 14-0 lead.

Daniels made an impressive debut last week for the Trojans (1-1, 0-1) when he threw for 282 yards and a touchdown against UNLV. But duplicating that against Stanford proved far more difficult with the Cardinal using blitzes to pressure and confuse Daniels at times.

Daniels went 16 for 34 for 215 yards with interceptions on his final two passes of the night. He was forced to leave the game for one possession in the first half after a hard hit by Joey Alfieri.

Running back Nick Brossette was LSU’s most productive player on offense, rushing for a career-high 137 yards on 19 carries, including a 42-yard scamper.

While the result was never in doubt, LSU’s offense lacked consistency and often struggled to sustain drives. The Tigers managed only one first down during their first three possessions of the second half. That could bode ill as LSU (2-0) heads into Southeastern Conference play against Auburn next week.

Southeastern (0-2), which plays in the second-tier Football Championship Subdivision, had most of the possession of the second half, but turned the ball over twice deep in LSU territory.

BLACKSBURG, Va. (AP) — Steven Peoples had two first-half touchdown runs, and Josh Jackson threw for a touchdown and ran for another for Virginia Tech.

Jackson went to the bench before halftime with the Hokies (2-0) up 31-7, and backup Ryan Willis led a touchdown drive on his first college series.

The FCS-level Tribe (1-1) were outgained 401-100 in the opening 30 minutes, and 71 of their yards came on a pass from Shon Mitchell to Nick Muse, setting up their lone points in the half.

PITTSBURGH (AP) — Trace McSorley threw for two touchdowns and ran for another and Penn State pulled away against sloppy Pittsburgh.

KJ Hamler ran 32 yards for a score and hauled in a 14-yard touchdown pass from McSorley to help Nittany Lions (2-0) bounced back from an opening-week scare against Appalachian State to beat the Panthers (1-1). McSorley finished 14 of 30 for 145 yards in the rain at soggy Heinz Field.

Penn State running back Miles Sanders ran for 118 yards, and DeAndre Thompson returned a punt 39 yards for a touchdown.

The Mountaineers (2-0) piled up 625 total yards in winning their 15th straight home opener.

Jennings had a 33-yard TD catch in the third quarter after scores of 11 and 24 yards in the second.    Grier also had a 40-yard scoring toss to Dominique Maiden in the fourth quarter. Grier completed 21 of 26 passes for 332 yards.

It was the first road win over a Power Five opponent for the Bulldogs (2-0) since 1995 against Baylor.

Fitzgerald missed the Bulldogs’ bowl game last year with an injury, and then was suspended for last week’s blowout of Stephen F. Austin. But after getting off to a rusty start Saturday, the dual-threat QB threw for 154 yards and ran for 159 yards rushing as the Bulldogs piled up 372 on the ground.

McKenzie Milton struggled and threw three interceptions in the first half. He was 21 of 39 for 243 yards with a touchdown pass to Gabriel Davis in the third quarter.

Patterson, the heralded transfer from Mississippi, was 12 of 17 for 125 yards. He connected for two scores to wide receivers after the position group accounted for a total of just three touchdowns last season for the Wolverines (1-1). Karan Higdon ran 140 of his 156 yards and a touchdown in the first quarter against the overmatched Broncos (0-2).

MIAMI GARDENS, Fla. (AP) — Malik Rosier threw for two scores and rushed for another, N’Kosi Perry came off the bench to throw the first three touchdown passes of his collegiate career, and Miami set a school record for margin of victory/

Brevin Jordan had two touchdown catches and Lorenzo Lingard ran for two scores for Miami (1-1), which set a school record by winning its 12th consecutive home opener. The previous record for victory margin was 70 — set against Savannah State in 2013. The 77 points scored also tied a school record.

It was Miami’s first shutout since blanking Bethune-Cookman in 2015 and the first shutout for defensive coordinator Manny Diaz in exactly six years. Diaz was at Texas when the Longhorns blanked New Mexico on Sept. 8, 2012. Savannah State (0-2) has played Miami twice, losing those matchups by a combined 154-7 score. The Tigers are dropping from the FCS level to Division II next season.

EUGENE, Ore. (AP) — Justin Herbert threw for 250 yards and four touchdowns for Oregon before heading to the bench in the third quarter.

Herbert was 20 of 26 passes, and had 10 total touchdowns — nine passing and one on the ground — in the Ducks’ two opening victories. The have won 22nd straight nonconference games.

Terry Wilson accounted for three touchdowns, Benny Snell ran for 175 yards and the Wildcats (2-0) beat the Gators for the first time since 1986. Kentucky hadn’t won in Gainesville since 1979.

For Florida and first-year coach Dan Mullen, it was a reality check after roughing up Charleston Southern 53-6 in the opener.