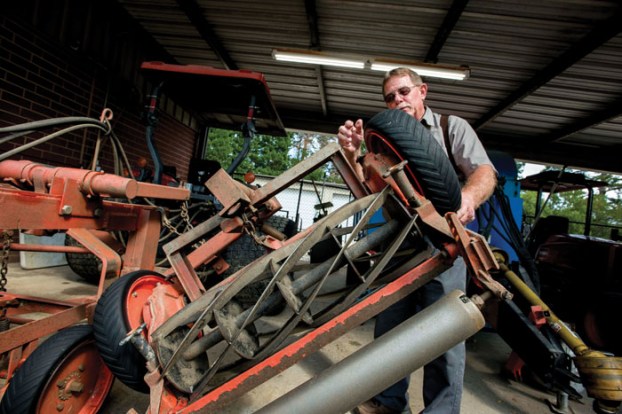 Mike Neely has been a longtime employee of Country Club of Salisbury. Neely maintains and does mechanical work on the most of the equipment used by the grounds crews. Jon C. Lakey/Salisbury Post

Quotes of the Week: ‘I’m not trying to tell people how to mow their yard.’

“Until you visit death, you never realize how short life is. You revisit the things you really need to do.”

— Mike Neely, manager of the maintenance and grounds crew at Country Club of Salisbury, who was diagnosed with pancreatic cancer in 2011 and says his boss and co-workers rallied to help him during chemotherapy and surgery

— Lynn Moody, superintendent of Rowan-Salisbury Schools, after Wednesday’s release of student test scores showed progress at a few district schools but no improvement or reduced grades at others

“I don’t necessarily race to win; I race to finish.”

— Mary Burrage, who pushed her baby in a stroller and ran with her 7-year-old daughter at her side during last weekend’s Sunrise 5K to benefit Rowan County United Way

“This is the worst feeling a father could have.”

— Jamie Heun, speaking Wednesday at the sentencing hearing for a man who pleaded guilty to charges related to the death of Heun’s 15-month-old daughter, Malaya, in 2014

“I’m not trying to tell people how to mow their yard. I just want them to be considerate of the two- and three-wheeled motorists we have out on our roadways.”

— Craig Pierce, a Rowan County commissioner, advocating for an ordinance to ban littering roads with grass clippings that present a slippery hazard for motorcyclists

“There was a spark here or there, but we never could ignite a fire.”

— Curtis Walker, head football coach at Catawba College, after his team struggled in a 34-3 loss to West Georgia last Saturday

“It gives them a chance to give it a test run, and it also gives people a chance to do a bucket-list item.”

— Marcus Neubacher of the N.C. Transportation Museum, which last weekend gave rail fans the chance to sit at the controls of a vintage steam engine

“People stopped by to ask, look or complain.”

— Noelle Loebe, who with her husband, Jeff Motes, dressed up their Fulton Street home with yard art that includes graffiti on the garage, flower-bed edging made of old license plates, and 10 ironing boards attached to the house

What online readers are saying about … Fame, school testing, and a few good officers

Rowan-Salisbury Schools ‘flat’ on annual testing report I am so proud of Bostian Elementary School and grateful that all four... read more