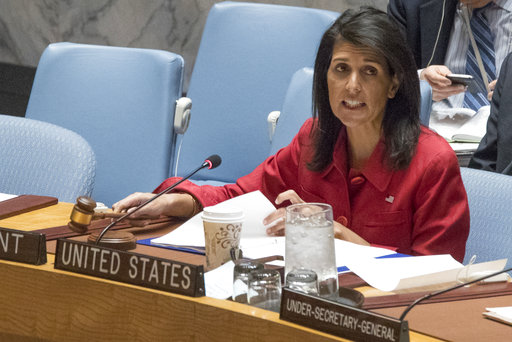 Nikki Haley: When I challenge the president, I do it directly

We have enough issues to deal with in the world, so it’s unfortunate to have to take time to write this, but I feel compelled to address the claims in the anonymous “resistance” op-ed published this week in the New York Times. The author might think he or she is doing a service to the country. I strongly disagree. What this “senior official in the Trump administration” has done, and is apparently intent on continuing to do, is a serious disservice- not just to the president but to the country.

I, too, am a senior Trump administration official. I proudly serve in this administration, and I enthusiastically support most of its decisions and the direction it is taking the country. But I don’t agree with the president on everything. When there is disagreement, there is a right way and a wrong way to address it. I pick up the phone and call him or meet with him in person.

Like my colleagues in the Cabinet and on the National Security Council, I have very open access to the president. He does not shut out his advisers, and he does not demand that everyone agree with him. I can talk to him most any time, and I frequently do. If I disagree with something and believe it is important enough to raise with the president, I do it. And he listens. Sometimes he changes course, sometimes he doesn’t. That’s the way the system should work. And the American people should be comfortable knowing that’s the way the system does work in this administration.

What this anonymous author is doing is very dangerous. He or she claims to be putting the country first, and that is the right goal. Everyone in government owes a greater loyalty to our country and our Constitution than to any individual officeholder. But a central part of our democracy requires that those who work directly for the president not secretly try to undermine him or his policies. What the author is describing is an extra-constitutional method of addressing policy disputes within the administration. That’s wrong on a fundamental level.

By making sweeping, but mostly unspecific, anonymous claims, the author creates many problems. Taking this course sows mistrust among the thousands of government workers who do their jobs honestly every day. It unfairly casts doubt on the president in a way that cannot be directly refuted because the anonymous accuser’s credibility and knowledge cannot be judged. It encourages U.S. adversaries to promote their hostile claims about the stability of our government.

What’s more, by throwing gas on a fire of endless distraction, the author and the frenzied media reaction to the op-ed have hurt all of us trying to do our jobs for the country.

Dissent is as American as apple pie. If you don’t like this president, you are free to say so, and people do that quite frequently and loudly. But in the spirit of civility that the anonymous author claims to support, every American should want to see this administration succeed. If it does, it’s a win for the American people.

As a former governor, I find it absolutely chilling to imagine that a high-ranking member of my team would secretly try to thwart my agenda. That is not the American way. It is fundamentally disloyal, not just to the chief executive, but to our country and our values.

To Mr. or Ms. Anonymous, I say: Step up and help the administration do great things for the country. If you disagree with some policies, make your case directly to the president. If that doesn’t work, and you are truly bothered by the direction of the administration, then resign on principle. There is no shame in that. But do not stay in your position and secretly undermine the president and the rest of our team. It is cowardly, it is anti-democratic, and it is a disservice to our country.

Haley is U.S. ambassador to the United Nations.

Quotes of the Week: ‘I’m not trying to tell people how to mow their yard.’

“Until you visit death, you never realize how short life is. You revisit the things you really need to do.”... read more