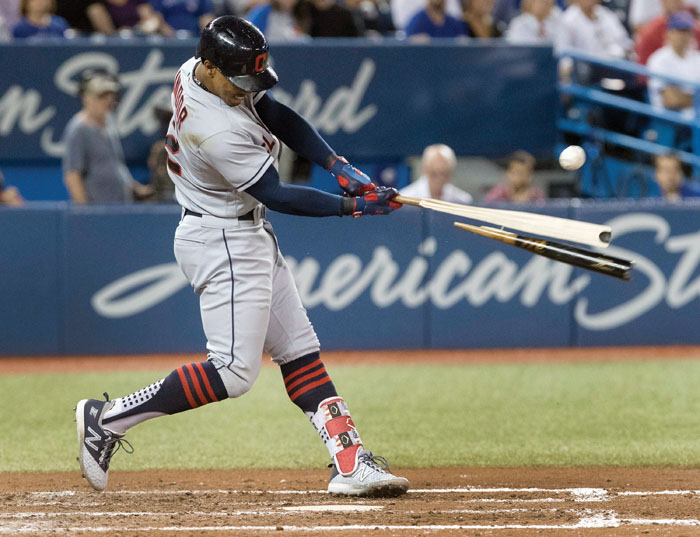 Cleveland Indians' Francisco Lindor hits a broken-bat single to drive in two runs against the Toronto Blue Jays during the fifth inning of a baseball game Thursday, Sept. 6, 2018, in Toronto. (Fred Thornhill/The Canadian Press via AP)

Lindor connected on Sam Gaviglio’s third pitch for his 10th career leadoff homer and seventh this season. He went deep to right off Gaviglio again in the third for his eighth career multihomer game. Lindor has 33 home runs, matching his total from last year. He added a two-run single in the fifth and singled again in the ninth.

Toronto’s Rowdy Tellez doubled in the second and fourth after getting a pinch-hit double in his debut Wednesday, making him the first player in major league history with extra-base hits in each of his first three plate appearances.

WASHINGTON (AP) — Pinch-hitter David Bote had an RBI double and scored in the 10th inning as Chicago came back to beat Washington in the opener of a four-game series.

Bote, who hit a two-out grand slam in the bottom of the ninth to give the Cubs a 4-3 win over the Nationals on Aug. 12 in Chicago, knocked a 100 mph fastball from Jimmy Cordero (1-2) into right field to score Albert Almora Jr. Bote came home on a single by pinch-hitter Taylor Davis.

Daniel Murphy went 1 for 5 with a strikeout in his first return to Washington since the Nationals traded him to the Cubs on Aug 21.

Chicago leads the NL Central by 4½ games over Milwaukee. Washington has lost three straight to fall to 69-72.

Pedro Strop (5-1) pitched a scoreless ninth, and Jesse Chavez earned his third save.

CINCINNATI (AP) — Francisco Mejia hit a solo homer and a three-run shot during his first start as the Padres’ up-and-coming catcher, leading San Diego over Cincinnati.

Mejia connected on his first two swings against Luis Castillo (8-12) for his first homers in the majors. The 22-year-old was called up Tuesday as the Padres get him ready for a bigger role next season.

Hunter Renfroe also hit a solo homer off Castillo , who gave up three for the first time in his career.