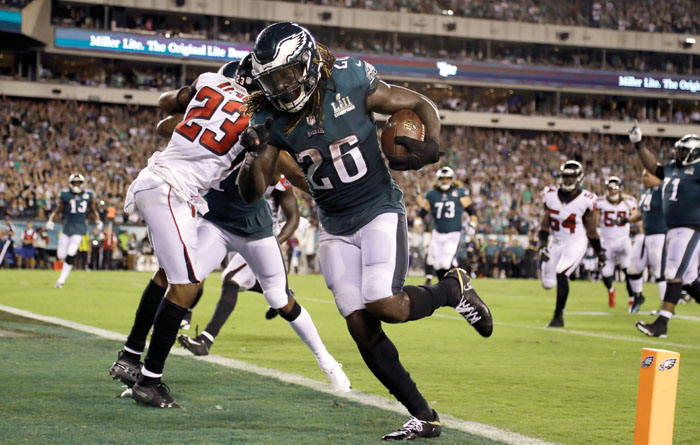 Philadelphia Eagles' Jay Ajayi scores a touchdown during the second half against the Atlanta Falcons in an NFL football game early Friday, Sept. 7, 2018, in Philadelphia. (AP Photo/Matt Rourke)

By ROB MAADDI, AP Pro Football Writer
PHILADELPHIA (AP) — Matt Ryan to Julio Jones failed in Philly again.
Jay Ajayi had a pair of touchdown runs, Nick Foles caught another pass to jump-start a sputtering offense and the defending champion Philadelphia Eagles needed another defensive stand to open the NFL season with an 18-12 victory over the Atlanta Falcons on Thursday night.
A sloppy, mistake-filled game that featured 26 penalties came down to Ryan throwing an incomplete pass to Jones in the left corner of the end zone on the final play from Philadelphia’s 5.
Jones couldn’t come down with Ryan’s pass from the 2 in the right corner of the end zone in Atlanta’s 15-10 loss in the divisional round in January.
“It was deja vu,” said cornerback Ronald Darby, who covered Jones on the last play this time around instead of Jalen Mills. “Jones is one of the best but we got the stop.”
A weather delay pushed kickoff back 45 minutes, forcing fans to wait for the unveiling of the “world champions” banner following the franchise’s first Super Bowl victory. Wearing his gold Hall of Fame jacket, former safety Brian Dawkins riled up the sellout crowd with owner Jeffrey Lurie by his side and led a chorus of “Fly Eagles Fly.”
The defense fed off that energy with a strong goal-line stand on the opening series, stopping the Falcons three times at the 1.
“We put a big emphasis on red zone,” safety Malcolm Jenkins said. “We trust our matchups and do we do our job.”
They did it again at the end.
After Ajayi’s 11-yard TD run and 2-point conversion gave the Eagles a lead with 2:25 left, Ryan led the Falcons down the field. He completed a 36-yard pass to Jones and connected with him again for 18 yards on third-and-17.
The Falcons had a first down at the 10 but Ryan threw four straight incomplete passes. A penalty on Jordan Hicks gave them one more chance and the Eagles held again.
“That’s a great defense and a great team,” Jones said. “You aren’t going to score at will on that team. They won a Super Bowl for a reason, they have the same guys on defense.”
Needing a spark on offense, Eagles coach Doug Pederson resorted to the “Philly Special” play that helped the Eagles beat the New England Patriots 41-33 in the Super Bowl. This time, Foles caught a 15-yard pass from Nelson Agholor to extend a drive that ended with Ajayi scoring a go-ahead 1-yard TD run in the third quarter.
“It was in our third-down men,” Pederson said.
Foles, the Super Bowl MVP still filling in for Carson Wentz, played it safe and the offense was conservative until Pederson turned to his favorite play on third-and-5 midway through the third quarter. Corey Clement took a toss and flipped to Agholor, who threw it to Foles running open down the right side for a gain to the Falcons 26.
Foles hit Zach Ertz for 18 yards on third-and-6 and Ajayi ran in a few plays later to put Philadelphia up 10-6.
“No panic, we’re resilient,” Pederson said.
Against New England, tight end Trey Burton took a flip from Clement on a reverse and threw a 1-yard TD pass to Foles to give the Eagles a 10-point halftime lead.
Philadelphia’s defense overcame a pair of blunders to temporarily preserve the lead. Tre Sullivan kicked a loose ball on a punt and the Falcons recovered the fumble at the Eagles 32. A sack by Fletcher Cox on third down was negated by Derek Barnett’s offside penalty to keep the drive going. But Rasul Douglas intercepted Ryan’s pass at the 4. Jones said he lost the ball in the lights.
Deion Jones then intercepted Foles’ pass that bounced out of Dallas Goedert’s hands and returned it 20 yards to Philadelphia’s 27, setting up Tevin Coleman’s 9-yard TD run that gave the Falcons a 12-10 lead in the fourth quarter. Matt Bryant hit the right post on the extra point.
On a hot, muggy night, it looked more like an August preseason game than a playoff rematch. Both teams looked rusty after many starters didn’t play much in preseason. It didn’t compare to the action in Kansas City’s 42-27 victory at New England in the 2017 NFL opener.
Bryant kicked field goals of 52 and 21 yards in the first quarter.
ANTHEM
Jenkins and defensive end Michael Bennett were on the sideline when the national anthem was played and made no overt demonstrations while it was played. Jenkins raised his fist during “The Star-Spangled Banner” last year and in the first preseason game as one of the most high-profile NFL players protesting racial inequality and other social injustices. He stayed in the tunnel for the last three weeks. Bennett mostly stayed off the field in the preseason. He wandered behind teammates near the bench and adjusted his equipment this time.
INJURIES
Falcons: S Keanu Neal left the game with a knee injury in the first half. … LS Josh Harris had his streak of 103 consecutive games played end because of a hip injury.
Eagles: WR Mack Hollins was placed on injured reserve hours before the game because of a groin injury.
UP NEXT
Falcons: Host the Carolina Panthers on Sept. 16.
Eagles: Visit the Tampa Bay Buccaneers on Sept. 16.
___
More AP NFL: https://apnews.com/tag/NFL and https://twitter.com/AP_NFL