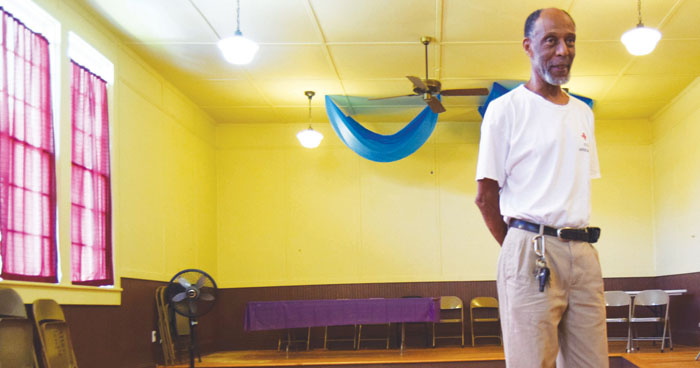 Leonard Hall stands in a renovated room at R.A. Clement School. As one of few remaining Rosenwald schools, the R.A. Clement Alumni Association is trying to get the site on the National Registry of Historic Places. Rebecca Rider/Salisbury Post

CLEVELAND — R.A. Clement School has been a cornerstone of the Cleveland community since its construction in the 1930s. The school is one of more than 800 Rosenwald schools built across North Carolina for young African-Americans, and it’s one of the last survivors.

“I know of less than 100 still standing,” said Angelo Franceschina, a historian and contractor versed in the history and renovation of Rosenwald schools.

That makes R.A. Clement a hidden gem, and it’s one reason alumni and local residents are working to have the school listed on the National Register of Historic Places.

“I think this school deserves to be recognized,” Franceschina said.

Funded in part by local African-American resident and in part by the Rosenwald family, Rosenwald schools were one- to four-room schools that provided an education and opportunity to black students. The family also donated money to existing schools and colleges.

More than 5,000 Rosenwald schools were built or received money across the South in the mid-20th century, four of them in Rowan County — Bear Poplar, which was demolished; Livingstone College; J.C. Price High School; and R.A. Clement.

Clement served grades one through 12 until it closed in the late 1960s. But friends of the school didn’t want to see it fall into disrepair, and the West Rowan Neighborhood Advisory Council purchased the property in 1971.

“The community people purchased the building with the intent of using it for the community — and that they did,” said Catrelia Hunter, secretary of the alumni association.

The four-room building was used as a gathering place until the late 1980s, when the advisory council could no longer maintain the property. For a long time, the school stood vacant. But many former students couldn’t bear to see it crumble, and the alumni association purchased the property in 2003.

“So (we) got together and decided (we) were going to restore the building,” Hunter said.

Association members saved, applied for grants and wrote letters — and, piece by piece, they began to restore the school.

Fifteen years later, the piecemeal renovation has restored more than 75 percent of the building — redoing the roof, building restrooms and adding a stage to the meeting room.

Association members knew from the beginning that they wanted R.A. Clement on the National Register of Historic Places.

“We pursued it because this is a historic building, and we felt it needed to have that recognition for the sake of our future,” Hunter said. “…We know how important it is.”

In addition to being a historic school, R.A. Clement has had far-reaching impacts. Its graduates and former students are lawyers, judges, philanthropists and Pulitzer Prize winners

More than that, the story of R.A. Clement is one of community. Its large rooms provided a gathering place for African-Americans during segregation and allowed them to build strong ties and lasting relationships. To this day, the school is one of the only buildings in Cleveland that could be used for community gatherings.

Alumni aren’t waiting for a historic designation to begin using the building, however. The alumni association has for years hosted its annual reunions there, and in the summer the school is a site for Rowan-Salisbury Schools’ Summer Meals Program and for several camps. Supporters hope that one day, they’ll be able to offer after-school care there.

“As long as people are going to have children, they’re going to need somewhere to go,” said Darlene Gaither, a Clement graduate.

While they’re looking forward to the future, alumni and local residents have not forgotten the school’s past.

“Our ancestors had dreams of when this building was built to make black kids better citizens, more intelligent citizens,” said Lonnie Gaither. “They gave their blood, sweat and tears for aspirations of black kids having a better future. … We need to keep this dream alive.”

R.A. Clement’s supporters have begun the nomination process to be placed on the National Register of Historic Places. It has received support from the North Carolina State Historic Preservation Office and received an Under-Represented Communities Grant from the National Parks Service.

Fanceschina, who has helped advise the alumni association since 2003, said the group should hear back about the nomination by the end of the year.

In the meantime, members are still raising money to complete renovations. Their current focus is for heating and air conditioning. The school has applied for a grant from the U.S. Department of Agriculture.