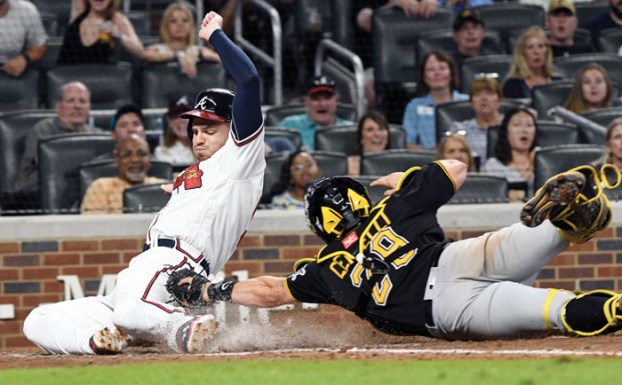 By GEORGE HENRY, Associated Press
ATLANTA (AP) — Freddie Freeman is delighted to have the Atlanta Braves in first place to begin the final month of the regular season.
It sure beats the drudgery of losing at least 90 games in each of the last three years.
“When you go to spring training every year, that’s all you can ask for, and here we are playing meaningful games with a three-game lead,” he said. “That’s what we want to be playing for. It’s a lot of fun.”
Freeman hit a tiebreaking, RBI double in the four-run eighth inning, and the NL East-leading Braves rallied to snap a three-game skid and beat the Pittsburgh Pirates 5-3 on Saturday night.
The Braves had dropped five of six overall and seven of eight at home, but they got the rally going in the eighth when Dansby Swanson’s 14th homer cut the lead to 3-2.
“You get a little energy, and it just keeps rolling,” Swanson said. “Hopefully that continues going into tomorrow and the next few days.”
Pinch-hitter Lucas Duda doubled and was replaced by pinch-runner Lane Adams, who advanced to third on Ronald Acuna Jr.’s sacrifice fly. Adams scored when Ender Inciarte reached safely after striking out on a wild pitch.
Inciarte scored on Freeman’s double, and Freeman advanced to third on a single and slid safely across the plate to beat a tag attempt on Johan Camargo’s sacrifice fly.
All four runs were charged to Keone Kela (3-4), who had allowed just one run in his first 14 games, a stretch of 14 innings, with Pittsburgh.
“This is a tough league up here from time to time, and everybody learns it,” Pirates manager Clint Hurdle said. “It’s hard. That’s why that team’s hunting over there. They have a good team.”
The Pirates dropped to 55-2 when leading after seven innings. They are 13-21 since ending an 11-game winning streak on July 25.
Jonny Venters (2-0) got the win after facing two batters in the eighth. Braves closer A.J. Minter faced the minimum in the ninth to earn his 12th save in 14 chances.
Pirates starter Chris Archer did not allow a hit until the sixth inning and led 3-0 after Starling Marte’s two-run double in the fifth and Gregory Polanco’s 22nd homer in the sixth off Braves starter Kevin Gausman.
Archer faced the minimum before walking Acuna to begin the fourth. He retired the next six batters before Swanson doubled to begin the sixth, and Acuna followed with an RBI single to cut the lead to 3-1.
Archer gave up two hits, one run and one walk and struck out five in six innings. He decided a couple of days ago to pitch from the stretch the entire time for the first time in his career. Archer didn’t shake off catcher Francisco Cervelli once.
“When I was 10 years old and first pitched in my life, my dad taught me to keep things simple, so I kind of went back to that,” Archer said. “And then the past couple of games, I’ve just felt more comfortable out of stretch.”
Gausman allowed five hits and three runs — one earned — with no walks and four strikeouts in six innings. Gausman’s streak of 19 2/3 consecutive scoreless innings ended when Marte made it 2-0.
Archer had struggled since getting acquired in a July 31 with Tampa Bay, going 1-2 with a 6.45 ERA in five starts and allowing seven hits and six runs and two walks in losing his last start 7-4 at Milwaukee.
RAKING
Acuna hit .336 with 11 homers and 21 RBIs in August and became the first NL rookie in the last 110 seasons with 39 hits and 11 homers in a calendar month. … Camargo leads the Braves with 50 RBIs since the start of June. … Marte went 2 for 4 and has hit .400 in his last eight games. … Of Polanco’s 76 RBIs, 74 have come as a right fielder, the most Pittsburgh has gotten at that position since Jose Guillen drove in 83 in 1998. … Swanson is hitting .314 with 23 RBIs in 156 at-bats this season in the seventh inning or later.
EXPANDED ROSTERS
Pittsburgh recalled C Jacob Stallings, utility man Jose Osuna and RHP Dovydas Neverauskus from Triple-A Indianapolis. RHP Nick Burdi was returned from a rehab assignment and reinstated from the 60-day disabled list. Utility man Pablo Reyes had his contract selected from Indianapolis.
Atlanta selected the contracts of RHP Kyle Wright and OF Adams and recalled RHP Touki Toussaint, RHP Bryse Wilson and OF Michael Reed from Triple-A Gwinnett. RHP Shane Carle was returned from a rehab assignment and reinstated from the 10-day DL. C Rene Rivera reported after he was acquired this week from the Los Angeles Angels.
TRAINER’S ROOM
Snitker said RHP Arodys Vizcaino, transferred to the 60-man DL, will make his first rehab appearance Sunday at Gwinnett. Sidelined 52 games this year with right shoulder inflammation, Vizcaino has converted 15 of 17 saves chances and 48 of 60 in his career.
UP NEXT
Pirates: RHP Nick Kingham (3-3, 4.63 ERA) takes Ivan Nova’s turn in the rotation. Hurdle said Nova, who was not with the team Friday or Saturday, is absent because of a personal matter. Nova did not have a locker reserved in the clubhouse. Kingham will make his eighth start.
Braves: RHP Julio Teheran (9-7, 4.18 ERA) will make his 27th start. He ranks third-best in the NL with a .203 opponents’ batting average but has given up the fourth-most homers and walks.
___
More AP MLB: https://apnews.com/tag/MLB and https://twitter.com/AP_Sports