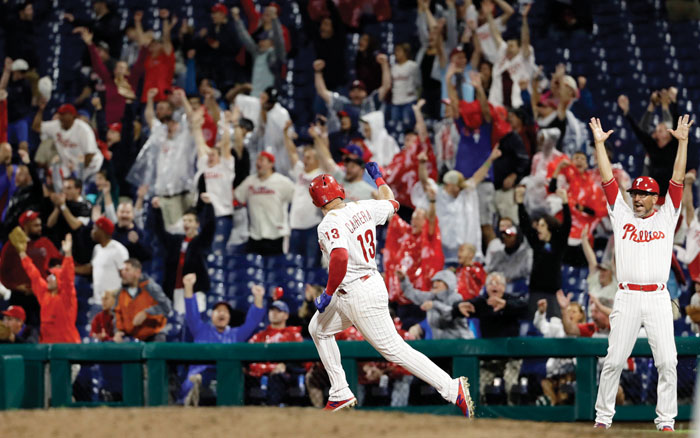 NEW YORK (AP) — Gleyber Torres drove in the go-ahead run one batter after a contested check swing loaded the bases for New York in the eighth inning, and the Yankees beat the Detroit Tigers 7-5 on Friday night as they await the arrival of 2013 NL MVP Andrew McCutchen.
Brett Gardner, Aaron Hicks and Miguel Andujar homered in the sixth to end Jordan Zimmermann’s bid for a second career no-hitter. Zimmermann carried a 3-0 lead and a no-hitter into the inning behind a solo homer from Niko Goodrum and a two-run triple by Jim Adduci.
New York trailed 5-4 when it loaded the bases against Joe Jimenez (4-4) on a double by Gardner and walks by Hicks and Luke Voit. Voit was ruled to have checked his swing on a 3-2, two-out pitch. Tigers manager Ron Gardenhire was ejected for arguing that Voit went around.
Torres then lined an 0-1 pitch from Alex Wilson to left field for a single, and the ball ricocheted off the head of diving left fielder Mikie Mahtook, allowing two runs to score for a 6-5 Yankees lead. Austin Romine brought in another run with an infield single.
David Robertson struck out Nicholas Castellanos and Victor Reyes with two on in the ninth for his fifth save.
Zach Britton (2-0) allowed a tying single to Mahtook in the seventh and a go-ahead, bases-loaded sacrifice fly to Ronny Rodriguez in the eighth that made it 5-4.
New York starter Luis Severino took a no-decision after pitching three-run ball for six innings. He struck out 10.
BREWERS 4, NATIONALS 1
WASHINGTON (AP) — Jhoulys Chacin pitched effectively into the seventh inning and Travis Shaw hit a two-run homer to pace Milwaukee.
The Brewers also got home runs from Jesus Aguilar, his 31st, and Erik Kratz in winning their third straight game. Milwaukee holds the second NL wild card spot.
Chacin (14-5) allowed a run on six hits while striking out six and walking two in 6 1/3 innings.
Jeremy Jeffress pitched the ninth for his eighth save in 13 opportunities. With a hard rain falling, the Nationals loaded the bases with one out, but Jeffress struck out Bryce Harper and got Anthony Rendon on a fielder’s choice.
Trea Turner had three hits for Washington, which went 1 for 15 with runners in scoring position.
Tanner Roark (8-14) allowed four runs on six hits over six innings.
PHILLIES 2, CUBS 1
PHILADELPHIA (AP) — Asdrubal Cabrera hit a solo home run with one out in the 10th to lift the Phillies in a game played through steady rain.
Cabrera connected off Steve Cishek (4-2), driving an opposite-field shot to left-center to help the Phillies pull within two games of Atlanta in the NL East.
Javier Baez hit his 29th homer for the NL Central-leading Cubs.
Pat Neshek (2-1) earned the win with a scoreless inning.
BLUE JAYS 6, MARLINS 5
MIAMI (AP) — Justin Smoak connected for a pinch-hit grand slam in the ninth inning to send the Blue Jays to victory.
Toronto trailed 5-1 heading into the ninth. The Blue Jays loaded the bases on Danny Jansen’s one-out infield single before the Marlins replaced Kyle Barraclough with Drew Steckenrider (4-4).
Aledmys Diaz then struck out looking, but Devon Travis forced in a run with a walk and Smoak drove Steckenrider’s 0-2 pitch over the wall in right for his 22nd homer.
Joe Biagini (3-7) pitched a scoreless eighth for the win and Ken Giles worked a shaky ninth for his 19th save.
PIRATES 3, BRAVES 2
ATLANTA (AP) — Gregory Polanco’s eighth-inning single drove in Adam Frazier with the tiebreaking run for the Pirates.
Jameson Taillon (11-9) gave up two runs on five hits in seven innings, his 17th consecutive start allowing no more than three earned runs.
Felipe Vazquez pitched out of trouble in the ninth for his 29th save.
The Pirates led 2-0 after five innings before Taillon gave up homers in back-to-back innings, to rookie Ronald Acuna Jr. in the sixth and Johan Camargo leading off the seventh.
Frazier scored the unearned run on Polanco’s single up the middle off Brad Brach (2-4).
___
More AP MLB: https://apnews.com/tag/MLB and https://twitter.com/AP_Sports