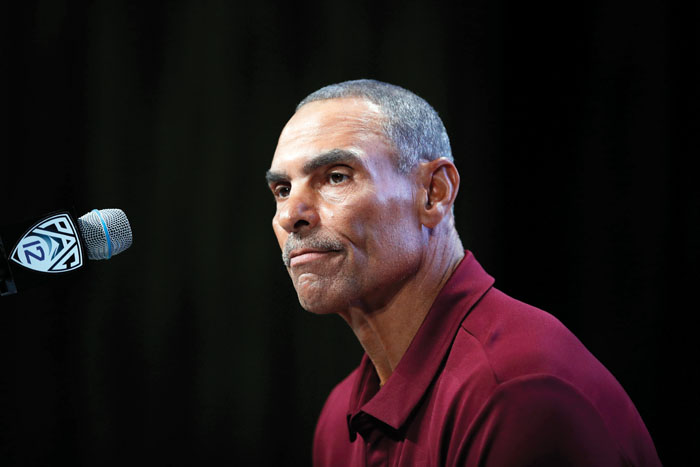 By BOB BAUM, AP Sports Writer
TEMPE, Ariz. (AP) — Herm Edwards does not want this to be all about him, but for now anyway, any talk about Arizona State football begins and ends with the affable new coach.
Edwards left a seat in the ESPN studio to return to the coaching sidelines for the first time since he was fired by the Kansas City Chiefs in 2008. He hasn’t coached in college since he was defensive backs coach at San Jose State in 1989.
But he will be the man in charge when the Sun Devils take the field against UTSA in the teams’ season opener on what could be a sweltering Saturday night.
To hear Edwards, it’s like he never left.
“I’m at home. I’m where I’m supposed to be,” he said. “I’ve only stood or played on the football field 30 years, and that’s not counting even college and high school. I’m very comfortable. That’s the environment I grew up in.”
It’s quite an experiment in Tempe, where Edwards heads what’s been described as an NFL-style program. But he joked that he still knows his way around on the sidelines.
Edwards inherits two-year starter Manny Wilkins at quarterback and has one of the country’s most dynamic receivers in N’Keal Harry.
But there are questions on defense.
UTSA, meanwhile, is coming off a 6-5 season and fifth-place finish in Conference USA. The Roadrunners did knock off Baylor in the season opener a year ago, a win that looked a lot more impressive then than it did as the Bears stumbled through a 1-11 season. Two years ago, though, UTSA put a big scare into the Arizona State in a 32-28 loss.
UTSA coach Frank Wilson acknowledges his team’s underdog status, considering the differences from his still-developing program and the depth of a team from a Power 5 conference.
“That’s what we haven’t been blessed with, from top to bottom,” Wilson said. “There is a gap, and it takes a culture, it takes years of recruiting classes to close it.”
Edwards doesn’t want the opening-night attention to be on him.
“I don’t want to be highlighted,” he said. “I’m not one of those guys and people are waiting, ‘How’s he going to react on the sideline?’ They’re going to get tired of looking at me because I’m going to be very stoic. Look at the players. They’re playing. The camera should never come to me.”
Here are some things to consider when Edwards make his debut:
WILKINS IN CONTROL: The Arizona State quarterback will be much more comfortable than he might have been because Edwards retained Rob Likens as offensive coordinator. Likens was co-offensive coordinator and wide receivers coach under Todd Graham. Now he’s offensive coordinator and quarterbacks coach.
“We’ve got to build around Manny,” Edwards said. “It’s his offense. We’ve got to make sure we cater to what he likes.”
Last year, Wilkins completed 63 percent of his passes for 3,270 yards and 20 touchdowns as Arizona State finished 6-7, losing to North Carolina State 52-31 in the Sun Bowl.
ROADRUNNER DEFENSE: UTSA could be tough up front, led by linebackers Josiah Tauaefa and Les Maruo along with defensive tackle Kevin Strong.
“They’ve got a powerful defensive front,” Edwards said. “They play the 4-2-5, very strong in the middle with a lot of veteran presence. It will be interesting to see how our offensive line handles these guys because they come off the ball. They strike you. They don’t give up a lot of points.”
DEFENSIVE QUESTIONS: Arizona State has five returning defensive starters, which means a lot of new faces.
“I think when you look at our football team, there’s a lot of questions that haven’t been answered,” Edwards said. “We brought in a new defensive coordinator. We have a brand new defense. That’s going to be interesting to watch unfold.”
DEFENDING HARRY: Harry will provide a huge matchup problem for the Roadrunners.
As a freshman in that USTA game two seasons ago, he made perhaps his greatest collegiate catch, a one-handed grab for a touchdown.
“They play a lot of man-to-man where they challenge the receivers at the line of scrimmage,” Edwards said. “…. It will be interesting to see what they do with him, if they allow him to play one-on-one all night. I anticipate that won’t happen.”
NEW QB: Wilson named junior college transfer Cordale Grundy the starting quarterback over graduate transfer D.J. Gillins.
The main difference was that Grundy arrived in school in January and participated in all the offseason drills. Gillins was a late arrival while he was completing class work at SMU.
___
More AP college football: https://apnews.com/tag/Collegefootball and https://twitter.com/AP_Top25