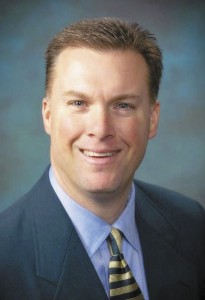 Rowan County Board of Commissioners Chairman Greg Edds has been named to the National Federation of Independent Business’ state Leadership Council.

The federation is a nonprofit, nonpartisan group that advocates on behalf of independent and small business owners across the nation.

In North Carolina, the 16-member Leadership Council is an advisory board that assists the association in developing strategies to support small businesses throughout the state. Leadership Council members are nominated either by the federation’s state director or current board members. They are then elected by the council.

Edds joins the council as the owner of Gregory C. Edds Insurance Agency in Salisbury, itself a small business.

He said he had worked in Raleigh previously with a former Leadership Council member, Joe Stewart, who also is in the insurance business as well as former director of the Free Enterprise Foundation.

When Stewart left the council recently, he was asked by state Director Gregg Thompson for a recommendation to replace him. Stewart recommended Edds, and Edds last week accepted the invitation after discussing it with Thompson.

“Serving on the Leadership Council is a great opportunity to join voices with other business leaders from across the state to make sure North Carolina remains competitive for quality jobs, industry and investment,” Edds said. “If North Carolina is not competitive, then Rowan County will find it harder to compete in an ever-changing, global economy.”

Thompson said Edds will be a great addition to the council.

“He cares tremendously about the free-enterprise system and ensuring that small businesses have an even playing field,” Thompson said. “Greg will bring a lot of energy and experience to the council, and we’re excited to have him on board.”

The late Frank Goodnight, another Salisbury business advocate, also served a tenure on the Leadership Council.

“Anyone that knew Frank appreciated his enthusiasm and hard work with the National Federation of Independent Business,” said Edds. “I am truly honored to serve in a position once held by such a wonderful community advocate like Frank.”

Joe Fowler, the Democratic candidate for Congress to represent N.C. House District 76, has been endorsed by the North Carolina League of Conservation Voters.

According to a news release, the political action committee is a “pragmatic, results-oriented, nonpartisan advocacy organization whose mission is to protect the health and quality of life for all North Carolinians.”

The group seeks to elect environmental champions who advocate for environmental policy that protect communities and hold elected leaders accountable.

Fowler was included in the PAC’s second round of endorsements in state legislative races, following actions by the General Assembly that it says “protect polluters’ profits over people’s rights to clean air and water.”

The organization cited the farm bill, which offered legal protections to Smithfield Foods against lawsuits claiming harm from hog odors and hazards filed by people who live near hog farms. It also said this year’s budget shortchanged the Department of Environmental Quality.

By endorsing candidates who support environmental protection, the League of Conservation Voters is working to establish a “Green Caucus” of environmental champions who will work to promote clean air, clean water, and clean energy for all North Carolinians, the organization says.

For Fowler, who has decades of experience in conservation and as a producer of locally sourced foods, environmental protection is a guiding principle.

If elected, he said he will work with fellow legislators to address the residual effects of coal ash and GenX water pollution.

“Gov. Cooper has already done tremendous work reversing the McCrory administration’s damage and acting as a bulwark against the worst environmental legislation coming out of the General Assembly,” said Dan Crawford, director of government relations for the group. “Our mission this year is to bring him the back-up he needs to uphold his vetoes and to make headway toward turning the Green Caucus into a majority caucus, so that we can move a positive, pro-environmental agenda forward.”

The Rowan County Republican Party will host a grand opening for its headquarters at 2:30 p.m. Tuesday.

The headquarters is at 704-B Jake Alexander Blvd. W. in Salisbury.

Unaffiliated voters and registered Republicans are welcome to attend. U.S. Reps. Ted Budd and Richard Hudson, along with other candidates and local leaders, also will attend.

On Friday, Salisbury’s Bell Tower Green project was one of 27 North Carolina parks to receive grant funding from the... read more