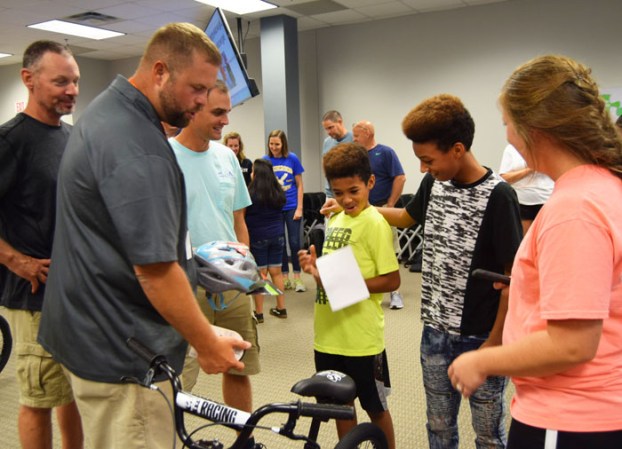 Nasir Smith, a student at Koontz Elementary, gets his first look at his new bike Thursday. Career and technical education teachers assembled the bikes as part of a team-building exercise. Rebecca Rider/Salisbury Post

SALISBURY — David Jordan pedaled his new bicycle around the carpeted room to the cheers and shouts of encouragement from teachers.

The Thursday afternoon test drive was a surprise for David and several other Koontz Elementary School students — but it was also a surprise for teachers.

Staff members were asked to work together in teams to assemble 17 children’s bicycles as part of back-to-school training. They were told the project would help foster teamwork and cooperation but soon found that the exercise had more than one surprise in store.

“Once they got up here, they had extra parts or not enough parts,” Mills explained.

Some boxes were missing pedals, wrenches, tire pumps or other tools, while other boxes had too many.

“So they started this bartering system,” Mills said.

The goal was to get the teachers to see that they were all part of a larger team with a single goal: the students.

“We’re kind of modeling what we want teachers to do — learning through experiences,” Mills said.

Teachers said they plan to take the lessons back to their own classrooms. Getting students up and moving, getting them working to build and create are much more engaging than a regular lesson.

“It was nice to do something I’ve never done before,” said Kasey Pegram, a parenting and child development teacher at Salisbury High School.

While students in her classes likely won’t build bicycles, Pegram can still incorporate new experiences into her lessons.

To further drive the point home, Mills and Megan Smith, RSS instructional management coordinator, arranged for the bicycles to be donated to students of Koontz Elementary School. At the end of the team-building exercise, the students surprised the teachers by coming to see their new bicycles for the first time.

“I really had no idea where we were going with this,” said Tammy Tutterow, a teacher at South Rowan High School.

But during the assembly process, she had an inkling something was up.

“We just cut manufacturing costs somewhere,” she joked as her group put the finishing touches on a bike.

“It just makes your heart melt,” she said.

The bicycles were sponsored by Daimler, F&M Bank and the Barr family.

SALISBURY — When O’Bryan Neely was born on March 16 more than 33 years ago, it was close enough to... read more