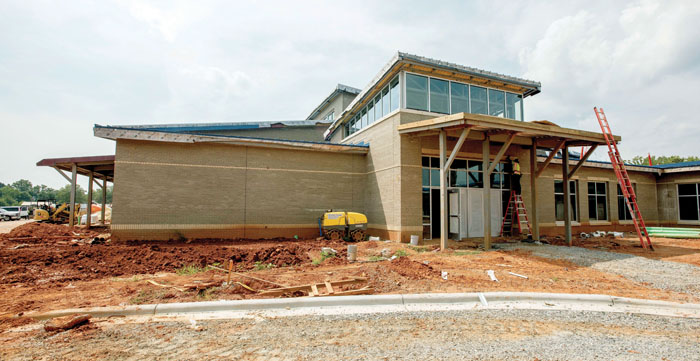 The main entrance to the new West Rowan Elementary School — which will replace Cleveland and Woodleaf schools — features a row of windows at the roofline. Jon C. Lakey/Salisbury Post

Over the summer, I have pondered the implications of two national news reports for distressed rural communities and their schools in North Carolina. Both reports, published in June, suggest hard decisions ahead beyond the 2018 elections.

The New York Times devoted a full page to the closing of an elementary school in Arena, Wisconsin, under the print-edition headline, “School’s Out for the Summer, and It Isn’t Coming Back.” In a broadcast from rural Iowa, NPR focused not on schools but on community economic structure, and put this headline on its online version: “As Rural Towns Lose Population, They Can Learn to ‘Shrink Smart.’ ”

Neither The Times nor NPR specifically mentioned North Carolina. Still, the reports hit home in a state in which 47 out of 100 counties experienced net out-migration — more people moving out than moving in — between 2010 and 2015, according to Carolina Demography at UNC-Chapel Hill. Its data show that 225 municipalities lost population from 2010 to 2016, and that 34 counties declined in population from 2016 to 2017.

Surely this reality presents a devilish dilemma in a state where two major commissions — myFutureNC and the Governor’s Commission on Access to Sound, Basic Education — are exploring ideas and heading toward recommendations in 2019. In communities with a shrinking and aging population, and invariably with a weak tax base, should the state take over struggling schools? Or should schools be merged or consolidated? Or can the state support and strengthen current schools, which ones, at what cost, and along what education strategy?

Rural advocates tend to speak of rural communities in general. Similarly elected officials shy away from appearing to favor some towns over others. “Shrinking smart’’ isn’t a term heard in North Carolina.

And yet, the customary two North Carolinas construct, rural-vs-urban, doesn’t fully capture reality across the map. Some communities situated along major highways or spots of natural beauty, and endowed with strong local leadership, may well rebound. But the sweep of communities with population loss suggests that North Carolina should bolster rural regions, focused on certain communities serving as hubs.

Even so, the difficulties are manifold in making policy and budgetary decisions. In many rural counties, the school system is the major employer. School boards and administrative positions are centers of local political and civic power. In majority-black communities, the memory lingers of school desegregation that moved African-American young people into the white schools, with black principals and coaches in effect demoted.

Writing for “Daily Yonder,’’ the nonprofit rural news organization, Mara Casey Tieken of Bates College has argued forcefully that closing schools damages rural communities. “Schools matter to the social fabric and cultural vitality of a rural community; they are places where relationships are sustained, where traditions are preserved and values are learned,’’ wrote Tieken, whose book, Why Rural Schools Matter, was published in 2014 by UNC Press.

EdBuild, a nonprofit funded by major foundations, offers a nationwide perspective in a recent report, “Stranded: How States Maroon Districts in Financial Distress.” EdBuild points out that North Carolina is one of only nine states with state-level authority over consolidations. Instead of having a patchwork of small city, town, and suburban districts as so many states have, North Carolina has decision-making advantages — and enhanced state responsibility — with its mostly countywide school districts.

State government has adopted some measures designed to extend funding to schools in communities with weak tax bases. The state has provided low-wealth supplemental funding since the early 1990s. More recently, the General Assembly used lottery funds for a $100 million “need-based’’ school construction fund. Last year, four counties — Clay, Camden, Gates and Jones — received a combined $30 million from the fund. And yet this year, the General Assembly declined to send to voters a referendum on whether to approve a $1.9 billion bond issue for school buildings.

Assuring a sound, basic education — especially for children from households at or near poverty — has remained elusive. The state’s existing funding schemes and strategies have not been equal to the challenge of recruiting sufficient principals of strong instructional leadership and highly talented teachers to slow- or no-growth communities.

Even in the face of daunting circumstances, North Carolina has rural public schools that indeed produce bright, striving young adults. I have encountered terrific rural students in my classrooms in 20 years at UNC-Chapel Hill. This moment of hard decisions challenges North Carolina to figure out how to respond to population shifts and widen the circle of educational success.