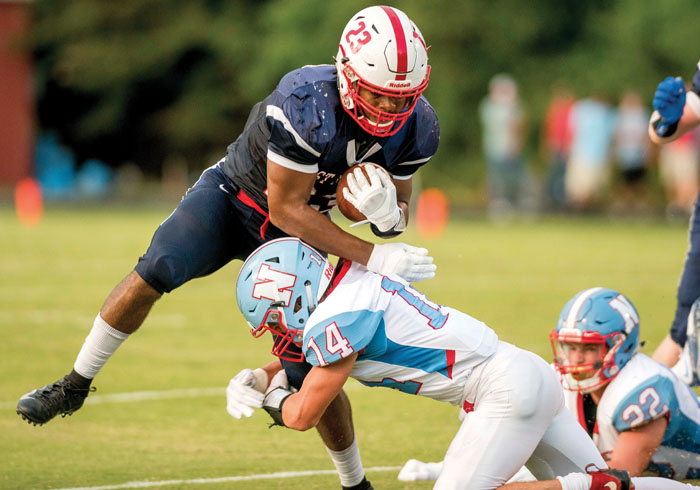 East Rowan’s 6-foot-7 defensive end Elton Hooper only weighs 200 pounds, but the basketball standout has a chance to be one of the county dominant defenders.

Hooper was super, making  jaw-dropping plays in the Mustangs’ 27-21 upset of North Stanly on Friday.

“Elton was unbelievable,” East head coach John Fitz said. “North Stanly ran a quarterback boot on a third-and-12, and our contain guy on that side got caught inside. They would have had a big play, but then Elton ran it down from the other side of the field. He also ran down a screen. He’s one of those guys that you’d better run right at him because it’s really hard to run away from him.”

DB Jax Fitz — that’s the coach’s son — had one of the key plays of the game when he intercepted a pass and returned it 55 yards.

East played a turnover-free game on offense. That was huge. Three lost fumbles proved impossible for East to overcome in the 39-25 loss to North Stanly last season.

After being steamrolled for 336 yards by North Stanly back Cameron Davis last year, East stifled him  this time.

“We held him to 25 yards in the first half, and that was big for us,” Coach Fitz said. “Our defense remembered what he did to us last year, and they accepted the challenge of not letting that happen again.”

Winning against a team that was ranked sixth in the preseason in 1A provides a major boost for East confidence.

“We beat a really good football team,” Coach Fitz said. “North Stanly will win a lot of games, and Davis is going to get his yards. It was just a night when our guys were not going to give up.”

The biggest challenge for East is going to be staying healthy over the course of the season. East only has about 30 varsity players. While Fitz isn’t asking any linemen to play both ways, many of the skill guys are.

North Rowan (1-0) had only six interceptions as a team last seasonbut figures to do a lot more damage in that department this year.

Jaharion Graham, who had one of those 2017 interceptions as a freshman, accounted for a pick in the 20-7 opening night win at Salisbury.

Junior Malcolm Wilson had a career game against the Hornets, getting 115 of his 173 rushing yards after halftime. Wilson had a 59-yard romp and picked up double-digit yards on three more carries.

He also played very well against Salisbury last year when he had 74 rushing yards on 10 carries and scored two TDs.

Senior back David Broaddus got his first varsity rushing TD for the Cavaliers.

Broaddus had scored a touchdown for East Rowan in a varsity game back in 2016.

Senior quarterback Willis Mitchell threw a career-high three interceptions against Salisbury, but he did complete eight passes and went over 2,000 passing yards for his career.

North got a scare when its most experienced offensive lineman, Benjamin Caldwell, went down briefly, but he was able to return to action.

Besides running back the opening kickoff for a tone-setting touchdown, sophomore DB Xzavier Davis took a snap and rambled for a key first down when North faked a punt on fourth-and-1.

Next for North is a  home game against West Rowan. North still leads the series 28-23-2 but hasn’t beaten the Falcons since 2001.

The schools played last year for the first time since the 2012 season.

Friday’s rivalry win was head coach Ben Hampton’s 25th at the helm of the Cavaliers and was North’s 388th victory. The Cavaliers have won 113 more than they’ve lost.

Salisbury (0-1) won the turnover battle with North Rowan, 4-1, but the Hornets still lost the game.

Junior DB Lawon Blackwell had his first two varsity interceptions to stop North drives, while safety Luke Holland also had a pickoff. That was nothing new for Holland, who led the Hornets with four interceptions last season.

Josh Miller, a senior defensive lineman, made the recovery on a muffed North punt.

Salisbury also came very close to recovering an onside kick after scoring a TD with 4:42 left in the game.

Salisbury struggled to move the ball on the ground, so sophomore quarterback Mike McLean put the ball in the air 28 times, including 21 attempts in a running-for-his-life second half.

McLean, a varsity running back as a freshman, had the first TD pass of his high school career, while junior Patrick Taylor’s first varsity catch was a touchdown.

The most passing attempts the Hornets had all last season was 24 in the playoff loss to Red Springs.

“I think we proved that our defense is good, but we also proved that our offense is not  where it needs to be,” Salisbury head coach Brian Hinson said. “We’re behind where we were last year on offense.”

The loss squared Hinson’s head coaching record at Salisbury and East Rowan at 24-24.

Next for the Hornets are the Carson Cougars. Salisbury leads the all-time series 6-5. The Hornets romped 41-12 last season.

Senior inside linebacker Jarrid Nelson had a terrific game for the Raiders (0-1) in Friday’s 35-13 loss to Carson.

Nelson was the primary tackler on 15 plays and assisted on four more stops. He had a tackle for loss and forced a fumble with a solid hit.

His 222 passing yards led the county’s QBs on opening night and were only 20 yards shy of the school record. Charles Sherrill, a one-year QB for the Raiders, threw for 242 yards against Northwest Cabarrus in 1997, and that record has stood for more than two decades.

In recent yeas, Nathan Lambert, Aaron Kennerly and last year’s QB Brett Amburn all had games with more than 200 passing yards, but Sherrill’s mark held up.

South goes to East Rowan on Friday, the last non-conference game for the Raiders, who will then play nine Central Carolina Conference games.

Carson’s offensive player of the week for the South game was junior lineman Robert Barringer, who opened holes for a bevy of running backs.

Head coach Joe Pinyan was happy with the decisions made by senior QBs Justin Smith and Josh Lee, who are still competing for the starting job.

Carson had only two games with more than 200 rushing yards last season.

Senior Jerry Cipres enjoyed the second 100-yard rushing game of his career and accounted for two TDs and a 2-point conversion.

Pinyan and Thomason, a Salisbury-Rowan Hall of Famer, have almost identical career records.

Senior spur Jacob Taylor was the special teams player of the week for numerous hits on kick coverage and also was a leader on defense.

Bias had two sacks and another tackle for loss. Parks made an interception.

Junior receiver Jalen Houston had at last one catch in every game last season, but Mooresville stopped that streak.

He threw for 166 yards on Friday and now has 4,301 passing yards for his career. Eighth on the list is former North Rowan and current Livingstone College QB Alexis Archie with 4,431.

Stolsworth put it in the air 34 times on Friday, the second-highest number of attempts in his career. He threw 35 times in a win against Robinson as a sophomore.

Stolsworth connected with Ty’kese Warren for  West’s only touchdown. It was the 49th career TD pass for Stolsworth. His next TD will tie him with North’s Mitch Ellis and East’s C.M. Yates for fourth place on the county’s all-time list.

A.L. Brown breezed past Hopewell, 54-0, in a running-clock opener, putting up nearly 500 yards of offense.

The Wonders got a pick-6 from junior safety Josiah Cauthen in the second quarter, making it three straight years they’ve had one on opening night.

Zaquan Clyburn had one against Hopewell in 2017, while Steven Howie had a big one against Concord to get 2016 started.

The Wonders allowed lots of passing yards to Hopewell, but they also had 11 sacks.  Senior linebacker Justin Holsclaw and senior defensive ends Darion Lott and Alante Johnson had two each.

Alex Gutierrez kicked a field goal to make it 54-0. That wasn’t to run the score up. That was just a chance to practice field-goal execution with a new kicker under game conditions.

The Wonders might need a field goal against Marvin Ridge tomorrow night. The Mavericks beat the Wonders 35-14 a year ago.

Davie (0-1) was pushed around on the stat sheet , but had a chance until the end against Page before losing Friday, 35-28.

Davie stayed in the game thanks to a couple of kicking-game TDs by young guys. Davie stuffed a punt for a score and rejected a field goal for a zanier score that included a scoop and a lateral after the block. The block of a 32-yard field goal that was just about a sure three points for Page was a 10-point swing in Davie’s direction. Gage Recktenwald, a sophomore safety, made the block.

Matthew Hill, a junior outside linebacker, was involved in both  special-teams scores. He recovered the punt in the end zone and scooped the blocked field goal and eventually lateraling to sophomore cornerback Kristian Lyons, who got the TD.

Davie’s schedule is challenging, to say the least.

Davie hosts North Davidson Friday. It’s been an eventful and very even series. Rivals for many years in the North Piedmont and Central Piedmont conferences, the schools have played 50 times. North Davidson leads the series 27-23, including a 28-7 pummeling of the War Eagles in 2017.

Mooresville comes after that.

Kellen May is the backup QB for Davie.

His sister, Lexie, played basketball and competed in track and field for the Salisbury Hornets last spring.