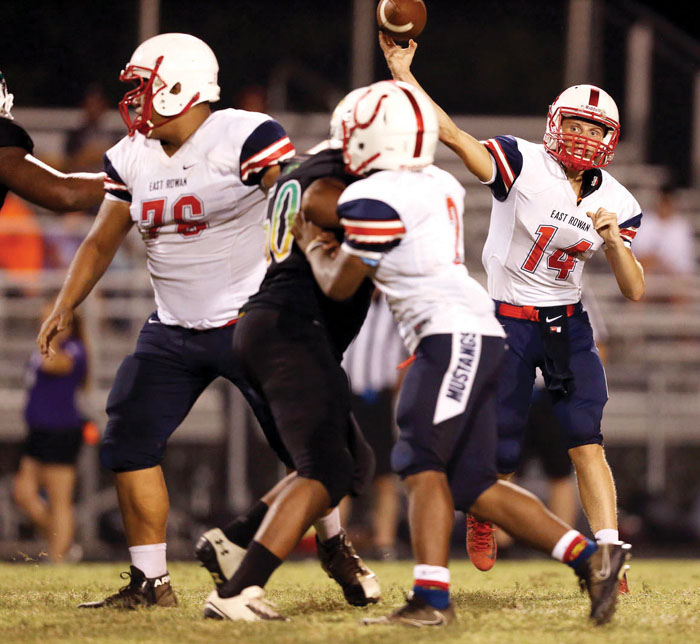 James Sipes file photo/for the Salisbury Post ... East Rowan’s QB Logan Forbis (14) looks for a receiver down the sideline during the preseason scrimmage against North Rowan.

GRANITE QUARRY  — It’s sort of a trick question, but can you name the only Rowan County football team with a two-game winning streak?

The correct answer is … East Rowan.

Not a lot of teams get to finish a season with a victory.  There are the eight state champions, plus a smattering of losing squads that win their final outing but still don’t qualify for the state playoffs.

The common theme in the Mustangs’ 37-28 triumph against North Iredell to conclude 2017 with a 3-8 record and the encouraging 27-21 win against North Stanly to open 2018 is junior quarterback Logan Forbis.

Forbis was the jayvee quarterback when the 2017 season began. Injuries and cirumstances left him as the varsity’s best option, and he became East’s primary quarterback the last five games. He accepted lumps, suffered growing pains, took his first varsity sacks and heaved his first varsity interceptions. But there also were TD passes against Carson and Statesville before his breakout night against North Iredell.

“I got all the jitters out last year,” Forbis said. “Friday night, I wasn’t nervous at all. I can’t be nervous. A lot of people are counting on me to do my job.”

East head coach John Fitz and offensive coordinator Randy Kaiser would love for Forbis (5-10, 155) to be taller and thicker, but he can read a defense and he has a strong arm, and East’s offensive linemen were able to keep his jersey almost clean against a North Stanly defense that boasts one of the top 10 tackles in the state in 6-3, 303-pound N.C. State commit C.J. Clark.

“I don’t remember any sacks, didn’t get hit that much,” Forbis said. “Our offensive line did great.”

There was an important test for Forbis in practices leading up to the North Stanly game. Forbis messed up a few times, Kaiser sent him to the sidelines and gave another QB  reps. Forbis got upset, which was just the reaction that Kaiser and Fitz wanted to see.

“Logan got mad when he got pulled,” Fitz said. “That was OK. You need your quarterback to be a competitor. You don’t want him to sulk or to not care or to get down on himeslf. You want him to want to get back in there and do it better, and that’s what happened.”

By Friday, Forbis was ready. So were a lot of teammates who had been trampled in New London for 336 rushing yards by North Stanly’s standout back Cameron Davis in 2017.

Even with home-field advantage for the rematch, East was rated a 23-point underdog by Brian Simmons, the state’s foremost prognosticator. North Stanly was ranked sixth in 1A.

North Stanly burned East barely a minute into the game on a pass play, and it was 7-0. That stung, but it wasn’t a case of here-we-go-again.

East’s 80-yard drive to answer that quick touchdown was the turning point in the game. Forbis finished a relentless march with a 22-yard pass to Sam Wall.

“We had overloaded the right side, and Sam was on the left,” Forbis explained. “I looked right, and the safety moved over that way a few steps, and then I came back to the left. We had Sam one-on-one with the cornerback on a post route, and he’s going to win that matchup most of the time. I just got him the ball.”

Forbis and Wall also connected for the Mustangs’ second touchdown, midway through the second quarter.

“The corner had been playing well off Sam most of the night, but this time he was up in Sam’s face, and that was a bad idea,” Forbis said. “Sam made a quick move and was by him.”

East went up 21-7 in the final minute of the first half when Forbis found Gabe Hinceman on a 26-yard scoring play. There was a lot of traffic to sort through, but Forbis patiently worked through his progressions and read the field. He saw a linebacker charging up and lobbed the ball to Hinceman.

It’s not like East is going to throw the ball  around 40 times. Forbis had a modest 16 attempts on Friday, with eight completions for 121 yards.

East hopes to be a team that throws the ball effectively enough that it spreads defenders out and opens lanes to run, and that’s what happened against North Stanly. The second half belonged to East’s ground game and defense. East possessed the ball, controlled the clock, moved the chains. Workhorses Christian Bennett and Sammy Pinckney combined for 46 carries and 186 rushing yards.

“We just kept smashing the ball at them in the fourth quarter,” Forbis said. “That was all our offensive line.”

North Stanly scored to cut East’s lead to 27-21 with 5:36 left in the game, but the Comets never got the ball back. East hammered out the clock.

“In the second half, we were using three backs, so they knew we going to run it, but they still couldn’t stop us,” Fitz said. “When there was 5:20 left, we needed two first downs to finish it off, and our guys got them. We stuck together as a team. I’m really happy with all of them.”

It was East’s biggest triumph in a while, arguably the finest moment for the program since the Mustangs prevailed in two playoff games in 2014.

Friday Night Hero: Heavier Woodruff is out to terrorize…