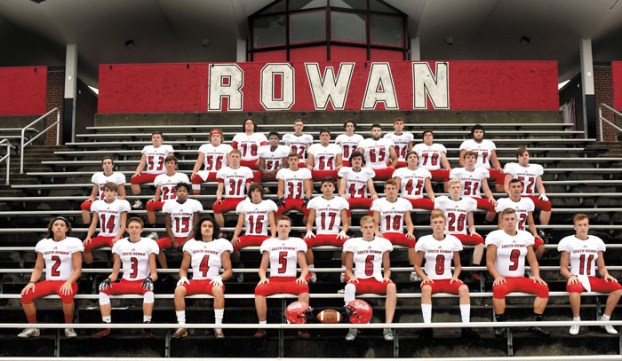 Raiders at a Glance

Cameron Hurd, Sr., WR/Slot, 5-8, 180 – A double threat as a slot receiver and runner in the triple option attack for South. He had 150 yards receiving and two TDs last season. Elected team captain by his teammates.

LANDIS — The key to the effectiveness of South Rowan’s triple option offensive attack this season depends heavily on versatility and the element of surprise.

The Raiders will be directed by first-year varsity starter Drew Huffman at quarterback, a 6-0, 160-pound junior who has a solid season of JV experience under his belt. They will also look to hard-running senior back Demarcus Blackwell who provides inside power and a threat to get loose on the edge. A sophomore newcomer at receiver is Mooresville transfer Barrett Thompson who shows great promise.

But the most important weapon in the option arsenal may well be senior Cameron Hurd who can hurt opposing defenses in a number of ways. While he is not an imposing figure (5-8, 180), Hurd brings speed, receiving and running ability and wealth of experience to the table for 2018.

“Our goal on offense is to be as balanced as possible” states fourth year head coach Daniel Yow. “Not necessarily 50-50 run-pass, but we want to always be in situations where you don’t know if we are running the ball or passing. We want to keep the defenses guessing.”

So how does Hurd, who lines up as a slot receiver and as a running back during the course of a South Rowan game, make the option attack click?

“Cameron is a four-year starter for us and he knows the system probably as well as our coaches know the system,” notes Yow. “He knows what is going on out there and because of that we are able to use him in multiple positions. Plus, he is one of the hardest workers on our team.”

Hurd posted some limited running yards last season for the 3-8 Raiders while catching 17 passes for 150 yards and two touchdowns. He expects to significantly expand that role for his senior year, regardless of where he lines up on a play.

“We want to have at least five touchdowns a game and try to get the ball down the field as fast as possible,” Hurd says. “I want to do my part to make that happen. Our offense is keyed on the run-pass option and my role is to put up receiving yards as well as to get yards on sweeps and reverses. It is so important to have balance in our offense.”

Hurd’s leadership is a key to South’s success in 2018 and his teammates rewarded him this pre-season with a vote to make him a team captain (along with defensive back Scott Shepherd).

“Being elected captains meant a lot to me and Scott,” Hurd said. “We have been here for four years, have learned a lot through good times and bad. We have always tried to improve as a team and every year we have gotten better.”

The Raiders did show noted improvement last year in their inaugural season in the 2A Central Carolina conference. The record improved to 3-8 after a pair of 1-10 campaigns and, as Yow noted, they won three of their last games of the season to finish on a high note. This season, they opened with county rival Carson last Friday and head to East Rowan this Friday before embarking on a long journey in the 10-team CCC.

“We are all excited about the coming season,” says Hurd, who is also a standout swimmer at South. “We are all looking forward to the season and I think we are going to surprise some people.”

LANDIS — An often-used phrase in football and other sports is “…you can’t teach speed.”

South Rowan senior defensive back Scott Stephens is a perfect example of that mantra. He is the fastest player on the team and possibly the entire school, using his quickness as a sprinter and relay team anchor for the Raiders in indoor and outdoor track. But his heart and soul are on a football field, particularly in the defensive backfield.

“I have always been a cornerback and safety all four years of high school,” he says. “After four years I feel I have figured it out.”

Last season, Stephens, a solid 5-10, 175, picked off three passes and against county rival West Rowan he snatched up a fumble for a TD return. He knows his first priority is pass coverage but he also does not mind getting in his licks. “I am a low hitter,” he says. “I don’t hit high. I learned that a long time ago but I like to make contact.”

Raider Coach Daniel Yow says Stephens knows his primary responsibility on defense and can always count on him with his experience and speed.

“He has definitely figured it out,” Yow says. “He knows all of our checks and coverages and can cover a lot of ground. He is one guy we are leaning on hard to lead our secondary and with Scotty we are getting everything from him on every play.”

Yow also emphasized that Stephens knows what his chief responsibility is for the Raider defense.

“I always remind him that as a corner he has to always be pass first,” Yow says. “I know he wants to get involved in the run but I don’t want him to do that until late in the play. Obviously having a corner that can do both run and pass defense for us gives us an opportunity to adjust and change things up during the game.”

Stephens feels the South defense will be strong and experienced this season, especially the back seven linebackers and defensive backs. “Our back seven is pretty solid because we are all pretty much a veteran group,” Stephens says.

While the defensive line is basically a new group, the linebackers are strong with senior Jarrid Nelson on the inside and senior Emilio Bernal on the outside. In the defensive backfield is senior corner Christian Reynolds, an All-County and All-Conference last season for the Raiders. Reynolds provided the defensive play of the season last year with a 100-yard interception return for a TD to secure a win over CCC foe Thomasville.

“We have a lot of talent and experience with our back seven,” Stephens says. “Plus our D-line is working very hard and getting better with each practice.”

The importance of Stephens to his team was best exemplified this summer at a team retreat when he was elected a captain (along with receiver Cameron Hurd). Twenty-three Raiders attended the retreat and Stephens received 22 votes as captain. It would have been unanimous if he had just voted for himself. But as Yow notes, Stephens is a team-first kind of guy who does all the right things.

“We are blessed.” Yow says. “We have a tremendous team not just talent-wise just having great kids. When you are putting a program together correctly, the wins and losses are the last things that come. Effort, attitude and just being good kid leads to good things.”

Stephens is at the top of that list of Raiders who give the effort and leadership to make the team a success.