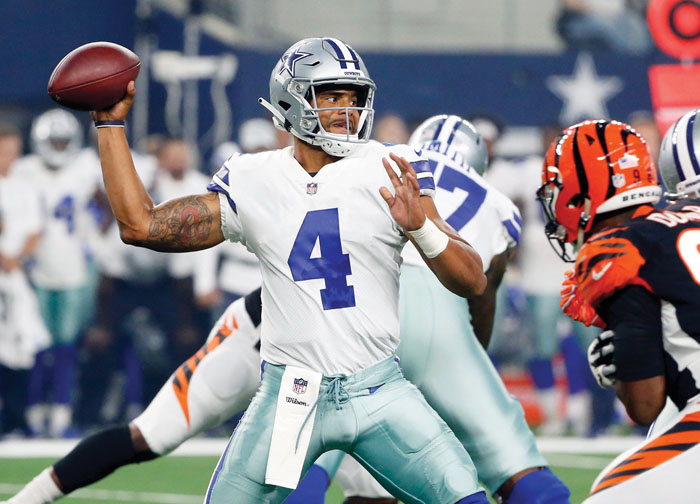 Dallas Cowboys quarterback Dak Prescott (4) looks to throw against the Cincinnati Bengals during the first half of a preseason NFL Football game in Arlington, Texas, Saturday, Aug. 18, 2018. (AP Photo/Michael Ainsworth)

Andy Dalton bogged down a bit with his Cincinnati Bengals.

Prescott led a pair of scoring drives in three possessions, capped by a scrambling 6-yard scoring pass to Terrance Williams, before the Bengals rallied after halftime for a 21-13 exhibition victory Saturday night.

The Bengals had just two first downs in three Dalton-led possessions a week after he threw for two touchdowns with an offense that was revamped after finishing last in the NFL. One of the first downs was on Dalton’s 13-yard scramble after the Bengals (2-0) started with a pair of three-and-outs.

A week after throwing a 30-yard touchdown to rookie Michael Gallup on his only drive of the preseason opener in San Francisco, Prescott was 10 of 15 for 86 yards. The TD drive for a 10-0 lead was kept alive by an 8-yard slant to Gallup, who reached out for a nice catch inside the Cincinnati 10.

Watson led the Texans down the field, going 5 of 8 for 73 yards, capped off by a 1-yard touchdown pass to Bruce Ellington.

It was a much lengthier outing than the preseason opener in Kansas City when Watson attempted just one pass in his return to game action after missing the second half of his rookie season with a torn ACL.

NASHVILLE, Tenn. (AP) — Jameis Winston gave the Tampa Bay Buccaneers a potent reminder of what they will miss when the quarterback sits out his three-game suspension to start the regular season.

Winston threw for 226 yards and two touchdowns after coming off the bench in the second quarter, and the Buccaneers beat Tennessee in the teams’ second exhibition game.

Ryan Fitzpatrick started for a second straight week as the Buccaneers (2-0) prepare the veteran to run the offense while Winston sits out for violating the league’s personal conduct policy after the NFL investigated an allegation Winston groped a female Uber driver in Arizona in March 2016. Fitzpatrick helped the Bucs hold the ball for 9 minutes of the first quarter, but they settled for a field goal as the quarterback was 5 of 13 for 46 yards passing.

LOS ANGELES (AP) — Rookie John Kelly rushed for 56 yards and a touchdown, and the Rams welcomed the Raiders back to the Coliseum with a preseason victory over Oakland.

Chris Warren rushed for 110 yards and a touchdown for the Raiders in their return to the venerable stadium that was their home for 13 seasons during their largely successful tenure in Los Angeles. Their still-passionate Southern California fan base turned out in force, filling the 95-year-old arena with black jerseys and loud cheers.

MINNEAPOLIS (AP) — Yannick Ngakoue had an 11-yard sack that helped Jacksonville’s defense hold Kirk Cousins and Minnesota’s starting offense to three completions and three points, and the Jaguars reserves rallied for a victory over the Vikings.

Cousins was crisp in his only series last week , but the Vikings went three-and-out on two of their four possessions with their new quarterback. Latavius Murray’s second fumble, stripped by Malik Jackson, was recovered by Calais Campbell to end another drive. Cousins finished just 3 for 8 for 12 yards.

Minnesota’s defense was closer to midseason form, though, with an interception by Harrison Smith of Blake Bortles and another sure pick by Mackensie Alexander that was bobbled and dropped.

Bortles played the entire first half and went 12 for 20 for 159 yards, producing a touchdown run by Leonard Fournette on one of his seven series, the last of three possessions the Vikings starters were still in the game.

Snedeker leads The Wyndham with play held up due…