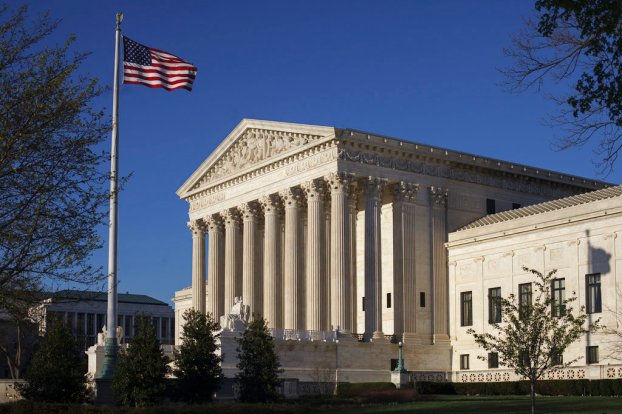 The U.S. Supreme Court is choosing not to take on a new case on partisan redistricting for now. Instead, the justices are sending a dispute over North Carolina’s heavily Republican congressional districting map back to a lower court for more work. The court’s order Monday follows a ruling last week in which it declared that Wisconsin voters who sued over the state’s GOP-drawn legislative districts had not proven they have the right to bring their case in court. The justices ordered the court in North Carolina to examine the same issue. (AP Photo/J. Scott Applewhite)

It is impossible not to support U.S. Supreme Court justices who are constitutionalists with an originalist bent. Candidate Brett Kavanaugh certainly fits that bill.

Fears of women’s groups that their rights might be abridged certainly took a hit with Kavanaugh’s lively banter with his young daughters during his nomination acceptance speech.

The perceived “right” bent of potential appointees to the court will try to balance the perception of a previous “left” bent. This may not pan out if past justices are any indication of judicial temperament — for example, President George H.W. Bush’s appointment of former Associate Justice David Souter.

It is the makeup of the court which raises my eyebrows on so many levels. The religious skewing of the court is of concern given that there are six Catholics — John Roberts, Anthony Kennedy, Clarence Thomas, Samuel Alito, Sonya Sotomayor and Neil Gorsuch (Catholic/Episcopalian) — and three Jews, Ruth Bader Ginsburg, Stephen Breyer, and Elena Kagan.

Kavanaugh, poised to replace Kennedy, doesn’t change this shift. Will the Catholic Church’s support of immigration efforts for those breaking the law, and which are not as constitutionally written, color the court’s view in their decision making? How about their failure to prosecute those who have abused children? On the court, where are the Baptists, Methodists, Evangelicals or other religious groups which hold the Protestant line for the Bible? Will their lack of representation flavor decisions against their freedoms?

In reviewing the justices’ law schools, the over-representation of Harvard Law — Breyer, Ginsburg, Roberts, Gorsuch, Kagan and Kavanaugh (as a lecturer) — give the nation rulings reflecting its teachings and insights of this institutions. Associate Justice Sandra Day O’Connor’s California roots with her Stanford degrees were impeccable, leading to Republican President Ronald Reagan’s appointment of her as the first woman on the U.S. Supreme Court. But it is her efforts to expand citizens’ understanding of civics and government, through iCivics, which can prove most beneficial as we increasingly find a citizenry with a poor understanding of the Constitution and the role of government.

It is the intellectual inbreeding of the court and a trend of trying to secularize the law to fit the wants of everyone which are most disconcerting. The emerging Democratic progressive socialists are bringing the Constitution and democracy to a head. Justices are there to interpret the law, not write the law or place financial burdens on government, while taxation powers rest with governments, not the courts.

The fact that nominee Kavanaugh was recommended for a legal appointment by now Associate Justice Kagan points further to an “old boys’” club to which access is limited and input based in a similar educational outlook.

Franklin D. Roosevelt appointee Associate Justice William O. Douglas, a rugged outdoor enthusiast, often brought consternation to his colleagues for unlike many, he did not feel bound by judicial restraint. He did have the foresight to appreciate “the right to be left alone is indeed the beginning of all freedoms.” Such is further acknowledged in his prescient quote, “We are rapidly entering the age of no privacy, where everyone is open to surveillance at all times; where there are no secrets from government.”

It is disheartening that President Obama, whose wife Michelle is a lawyer and who has two daughters, did not nominate a black woman to the court, though he disproportionately captured their vote. It is also disheartening that President Trump has no black woman on his list for potential Supreme Court nominations, though there are a few such Republicans who would fit the bill. Such a move would be a brilliant piece of the strategy for inclusion and help quiet the storm of a building divide in this nation where corporations are being seen as people under the 14th Amendment while too many people feel they aren’t being seen at all.

Dr. Ada M. Fisher of Salisbury is author of “Common Sense Conservative Prescriptions Good for What Ails Us Book 1” and is the N.C. Republican National Committeewoman.

‘The Matrix’ at 20: A prophecy now being realized?

Next year marks the 20th anniversary of the sci-fi movie classic “The Matrix,” which depicts powerful machines attempting to subdue... read more