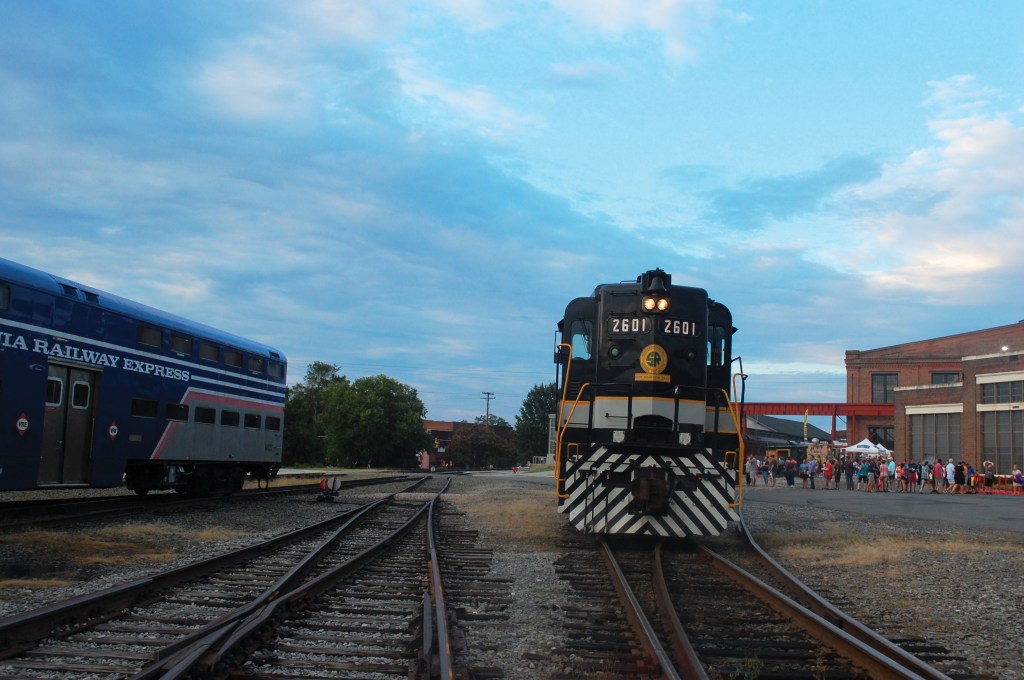 Riders of the final Brew & Choo train board at the N.C. Transportation Museum on Aug. 11.

SPENCER — Beer and trains brought hundreds of people out to the first annual Brew & Choo at the N.C. Transportation Museum on Saturday.

Sipping on pours of New Sarum’s Rail Yard Raspberry Berliner Weisse and Railwalk’s Honey Train IPA (or Cheerwine for the kids), riders could sit back and enjoy the specialty beers while riding the train.

Chris and Martha Betancourt, of Rockwell, were enjoying their date night. The two have attended Wine and Dine on the Rails in the past.

“We’re still in Salisbury,” Martha said. “We’re still 20 minutes away from home. We’re having a date night. We don’t have to worry about the kids or anything. We can really get away, but not really.”

Chris added he liked that there was table service, which makes it different from a traditional train ride.

They said they would be open to bringing their kids to a future Brew & Choo event when they’re older.

Lisa Schafer, of Statesville, brought her whole family. They have been coming to the museum for many years.

“I think that’s what makes this so unique about this,” Schafer said. “It’s for everybody. You got kids, adults, my in-between. It’s just for everybody. I was telling my sister-in-law this is the most fun we’ve had on a Saturday night in a long time.”

“There was lots of kid activities and food,” Dishman said. “It’s been great for him.”

The event had a bounce house, giant Connect Four and other games. Visitors could also get food from seven food truck or get another glass of beer from the seven breweries.

For the fourth and final train ride, the N.C. Transportation Museum sold out, capping at 432 riders, but the event was open to public to get a beer and visit what the museum had to offer.

The N.C. Transportation Museum’s next event in Day Out With Thomas starting Sept. 28. For more information about the museum and its events, visit nctans.org.