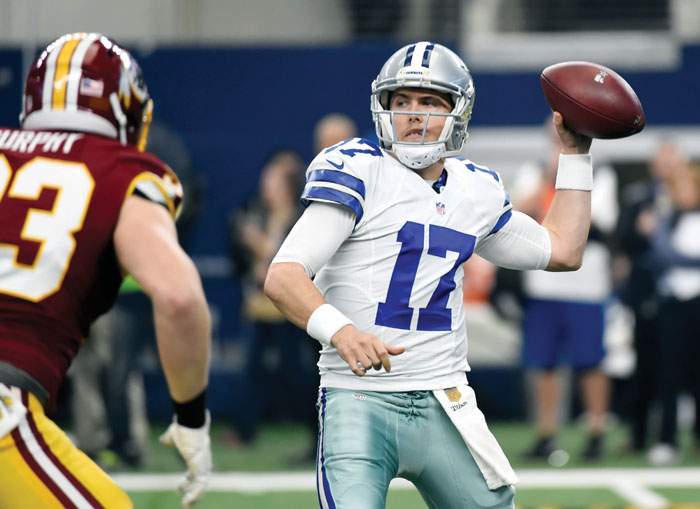 FILE - In this Jan. 3, 2016, file photo, Washington Redskins outside linebacker Trent Murphy (93) applies pressure as Dallas Cowboys quarterback Kellen Moore (17) during the first half of an NFL football game in Arlington, Texas. Two years ago, Moore went into training camp as the backup to Tony Romo before breaking an ankle in practice. Because of that injury, Prescott became the starter when Romo injured his back in a preseason game. (AP Photo/Michael Ainsworth, File)

OXNARD, Calif. (AP) — Kellen Moore’s college coach heard from his former quarterback while Moore was thinking about trading his helmet for a whistle.

The next thing Chris Petersen knew, Moore was in charge of Dak Prescott as quarterbacks coach of the Dallas Cowboys not too long after sitting third on the depth chart behind the 2016 NFL offensive rookie of the year.

“When I heard that, I think, ‘Really? You’re sitting next to the guys and now you’ve got the chalk and you’re telling them exactly what to do?’” said Petersen, now at Washington after coaching Moore at Boise State. “It’s not like he played for a long, long time in the NFL. I think all those things just speak to how rare he is and how special he is.”

Nobody close to Moore is surprised he ended up in coaching. They’ve been saying that about him since he was winning high school state championships under his dad, Tom Moore, in Washington. The only surprise is that his younger brother, Fresno State receivers coach Kirby Moore, beat him into coaching by several years.

Two years ago, Moore went into training camp as the backup to Tony Romo before breaking an ankle in practice. Because of that injury, Prescott became the starter when Romo hurt his back in a preseason game.

The Cowboys ran off a franchise-record 11 straight wins that season, forcing Romo to concede the job to Prescott before retiring to go into broadcasting. Moore was a backup again, this time behind Prescott, before losing that job to rookie Cooper Rush last season.

Retirement was on Moore’s mind when the Cowboys decided not to bring back Wade Wilson, who coached Dallas quarterbacks the previous 10 years. Moore, who turned 30 in July, decided the time was right.

“There’s nothing like playing,” said Moore, who started two games at the end of a lost 2015 season marred by Romo’s twice-broken collarbone. “Certainly wasn’t planning on something like this opening. When the opportunity presented itself, felt like it was a really good opportunity. Hard to turn down.”

As for running meetings so soon after sitting next to Prescott in the QB room, the understated Moore shrugs.

“You talk a little bit more in meetings. That’s about it,” he said. “I think simply it’s a collaborative effort in that room. We’re all trying to achieve the same things. One quarterback plays at a time. Do everything you can to help that guy succeed.”

Moore’s transition has been eased by his relationship with offensive coordinator Scott Linehan, who had the same job in Detroit when the Lions signed Moore as an undrafted free agent in 2012.

He never took a regular-season snap with the Lions, and came to Dallas a year after Linehan was hired. They share roots in Washington state — their hometowns are 15 miles apart — and a reserved demeanor that Linehan believes plays well with most quarterbacks.

“They didn’t even blink,” Linehan said of Moore’s teammates-turned-pupils. “The respect is there, the whole just understanding that that’s not an easy transformation for a lot of people. But they also knew that Kellen, there’s nobody that takes more diligent preparation and notes and prepares as a player.”

Moore can relate to his head coach, too, since Jason Garrett did the same thing 13 years ago. The former backup to three-time Super Bowl winner Troy Aikman in Dallas, Garrett ended with playing career with Tampa Bay and Miami in 2004. In no time — two weeks, Garrett said — he was Nick Saban’s quarterbacks coach with the Dolphins.

The most important guy is Prescott, but even that won’t really be new to Moore. Since his injury him sidelined all of 2016, Moore was a de facto coach for a first-year player navigating the sudden success of a 13-win season before the Cowboys lost to Green Bay in a divisional playoff game.

Moore said that season got him to thinking about the next phase of his career. And because of that season, Prescott doesn’t feel much of a change.

“Obviously he’s being vocal. He’s being more of a coach,” Prescott said. “He’s always been there teaching me the game, teaching me different things about the defense and the offense. But now that’s his job. He’s done a great job in the film room, on the field.”

While agreeing that the move is unusual, Petersen also sees it as logical.

“He has paid attention like a coach,” Petersen said. “He’s so laser-focused on the mental part of things. He knows that system inside and out. It’s not like he’s learning a new system and all this. He can tell them exactly like this is what you do. I think it’s pretty smart by the Cowboys.”

And not surprising to Petersen, or anyone who knows his former quarterback, that Moore went for it.