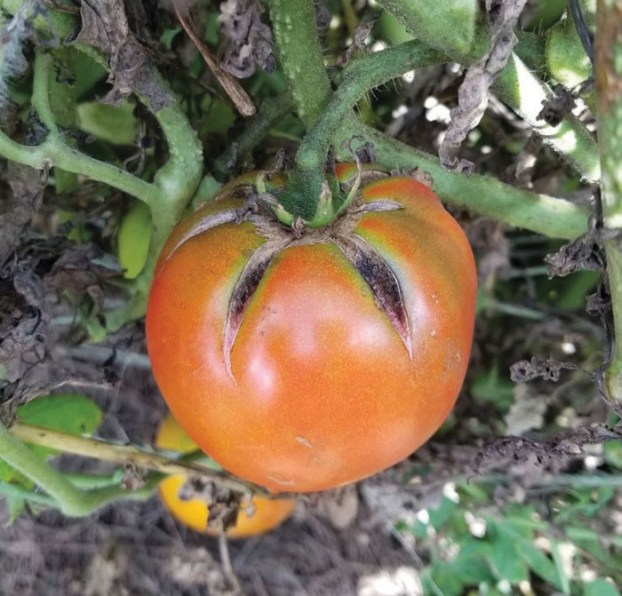 Cracking in tomatoes is not uncommon with all the heavy rain we've been having.

For farmers in Rowan County, recent heavy rains have been both a blessing and a curse.

Blessings came for producers of crops like soybeans and corn, which suffered early in the season because of high heat and drought-like conditions.

“We’re looking forward to this weekend at the Farmers Market,” he said. “We’ll finally have some real good corn to sell.”

Reaction to the stress can be seen in the kernel production, she said. Kernel development stops when the plant is trying to survive extreme conditions, leading to ears of corn with areas that are missing kernels.

Mike Miller with Miller Farm Fresh Produce said the rain led to an abundance of kernel production in his crops: “It’s made the ear grow out of the shuck on some of them,” he said.

Fruits and vegetables with high water content were damaged by heavy rain. Tomatoes, cantaloupes and blueberries in areas hardest hit by rain swelled to the point of bursting.

Miller said on his farm, the rains was so severe that even green tomatoes were cracking. Generally, it’s the plants that are beginning to get color that burst, he said.

“We didn’t have a single red tomato to sell the first of the week,” he said. “It’s been a long week. We’ve still got some to pick.”

Because he grows corn and soybeans, he was happy to take the good with the bad.

Correll agreed, calling the rain a “real mixed bag.” The rains were enough to replenish his irrigation ponds.

“We should have enough water in reserve now that even if it does turn dry, we’ll be OK for a while,” he said.

Herman said the rain has been a boon for Piedmont Research Station’s irrigation system as well.

“All the research land is irrigated,” she said. “We had three solid weeks this year where we had to run our irrigation system.”

For now, she said the soil moisture is “really good.”

“But will it stay that way? That’s always our dilemma,” she said. “At this one little snapshot in time, we’re actually in good shape. That could change tomorrow with these high temperatures.”

The month of July was very hot and dry here in Rowan County. However, by the end of July, weather... read more