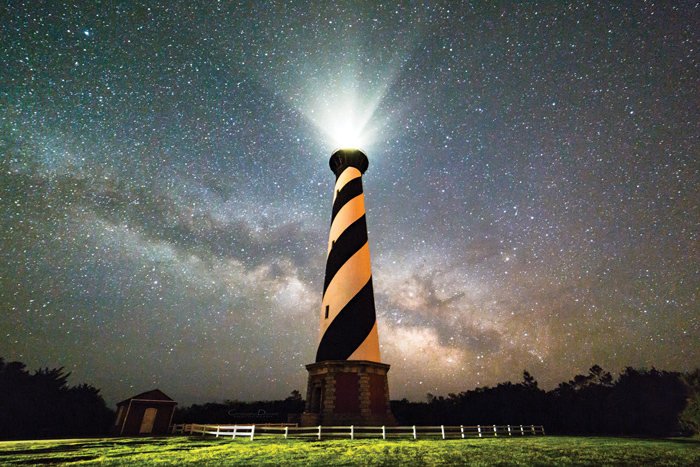 Christopher braved mosquitoes and more than an hour’s drive from Nags Head to shoot the Hatteras Lighthouse at midnight in May 2017. 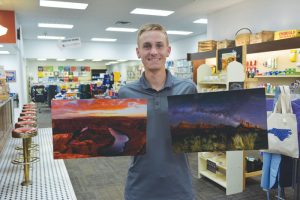 By mid-August, Derrick will have 8×10 prints for sale at Fuller Market on S. Main St.

Christopher eventually saved up his money and bought his own camera, but still found himself using his mom’s. Finally, as a sophomore at Catawba College, he bought a “decent camera,” he says. A year later, he upgraded to a Canon 5D Mark 3, the camera he uses today.

“It was a black Friday deal I couldn’t pass up,” notes Christopher, now 23, and a 2018 Catawba graduate.

He’s also purchased three different lenses, a 24-105 mm for general use, a 14 mm prime that’s fully manual, and he shares a 100-400 mm zoom with his parents, Mark and Elizabeth Derrick.

“That lens costs as much as my camera body,” he notes.

Over the years — as you might surmise — photography has become a huge hobby for Christopher. At Catawba, he needed a lab credit, so he took an ornithology class under Dr. Joe Poston, who it turns out is an avid photographer, too.

Christopher started taking his camera along to the Catawba Nature Preserve, a much better choice for him than binoculars, he says. “That just gave me another subject to shoot.”

He’s shot photographs at several of the lighthouses and at Pea Island National Wildlife Refuge. He’s photographed the wild horses at Corolla. The Outer Banks, he adds, are ideal for astrophotography — capturing the night sky.

“It just has sorta snowballed,” he says of his hobby.

By mid-August, Christopher will have work ready to sell at Fuller Market, 112 S. Main St. His prints are 8×10 inches and $20 each, unmatted.

“I don’t want to mat or frame a photograph because people are particular about what they want in their home,” Christopher points out.

Mandy Bates, Christopher’s assistant teacher from kindergarten, purchased a 24×36 image of the Frisco Pier he shot in May 2017. The pier, which was located at Cape Hatteras, was torn down beginning in December 2017.

“That was cool,” he says. “I’ve never printed anything that big.”

“I’m fascinated with stars and the night sky,” says Scott Robinson, who owns a print of the photograph Christopher shot of Hatteras Lighthouse at midnight.

It’s printed on a metal plate, Robinson notes. “It gives it a really nice depth and sheen. I’ve got it hanging in my office at home. I think we’ve got a mini Ansel Adams in Salisbury. He’s that good. He’s got a good eye, and patience for waiting on the right shot.”

“It’s been amazing to see the changes in Christopher’s picture from several years ago until now,” his mom says. “What I find intriguing is that he is self-taught. He had learned so much from watching YouTube videos, and just experimenting.”

Christopher and his family recently took a trip out West, where he photographed some of his favorite images to date.

“It’s sort of a big year for us,” he explains. “Our parents are celebrating their 25th anniversary, David turned 21, and I graduated from college. We had never vacationed past Tennessee.”

They rented a spacious SUV and took off, each taking two-hour driving shifts. After three days, they arrived in Flagstaff, Arizona, and spent time at the South Rim of the Grand Canyon. They also saw Las Vegas, which Christopher classified as “really loud, really hot, and annoying.”

The National Parks held much greater appeal to him — and myriad subjects.

They spent about a week visiting Zion National Park and Bryce Canyon National Park in Utah, and Page, Arizona, which houses Horseshoe Bend and Lower Antelope Canyon, the latter of which is on Navajo land. The family celebrated the Fourth of July by watching a fireworks display in Knab, Utah.

Over the two-week trip, Christopher shot about 2,000 frames.

Christopher says he’d love to sell fine art as part of his avocation, have an image published in National Geographic, and continue to enter photography contests.

Another frequent subject has been Catawba’s administration building, especially since he lives less than five minutes from campus. Sunrises, sunsets and storms hold a special interest for him.

Toward the end of the day, he watches the horizon.

“If there are clouds on the horizon, it’s not a good sunset to photograph,” he says. “You want lots of low-level clouds, with enough space on the horizon for the sun to shine back through. Sunrises tend to be better in winter, maybe because of the lower humidity, but you can photograph a good sunset any time of year.”

Christopher adds, “I love living in North Carolina. I’m two hours from the Blue Ridge Parkway, and five hours from the Outer Banks. We’re situated in a good spot.”

He envisions one day attaching a small trailer to his bright yellow Jeep, and heading out on photography expeditions.

“Mark and I want Christopher’s photography to be something that he can look forward to doing on the weekends to provide a mental getaway from a job,” Elizabeth Derrick says. “As parents, you like seeing you child get excited about something. For a lot of parents, that may be travel sports but for us, it’s travel photography.”

Refresh your menu with new ideas for old favorites