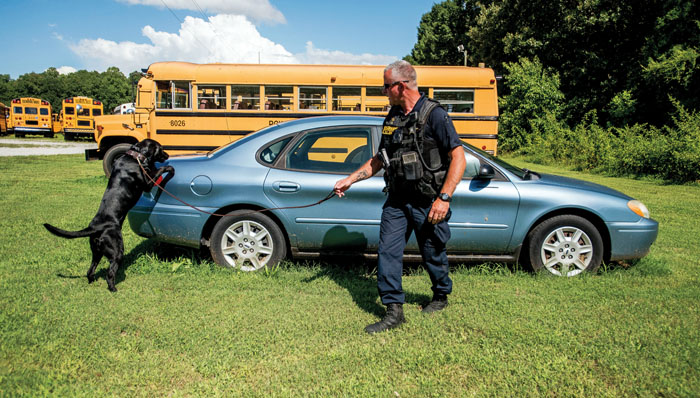 SALISBURY — Junior, a black Labrador, may have been among the countless dogs that are euthanized after a short stay in a shelter.

But the excitable 19-month-old is getting a new “leash” on life as a member of the Rowan County Sheriff’s Office’s K-9 unit.

The dog was abandoned and found tied to a stop sign. Someone took him to a North Carolina K-9 training facility, hoping the staff could find a place for the dog.

While at the facility, the staff began training Junior along with the other dogs. He learned quickly and is now partnered with veteran Rowan County sheriff’s Officer Wes Smith.

But Junior is not the first rescue dog to join the Rowan K-9 unit, Smith said.

Earlier this year, the office was in limbo when a K-9 suffered a stroke and never recovered. Smith’s K-9, Kilo, was set to retire after his hips gave out, but he also died.

Smith just wrapped up his first week of duty with Junior and will continue to train with the dog. Junior will be used to search for lost people and articles of clothing and to detect drugs.

Smith said Junior is a good work dog who is still learning.