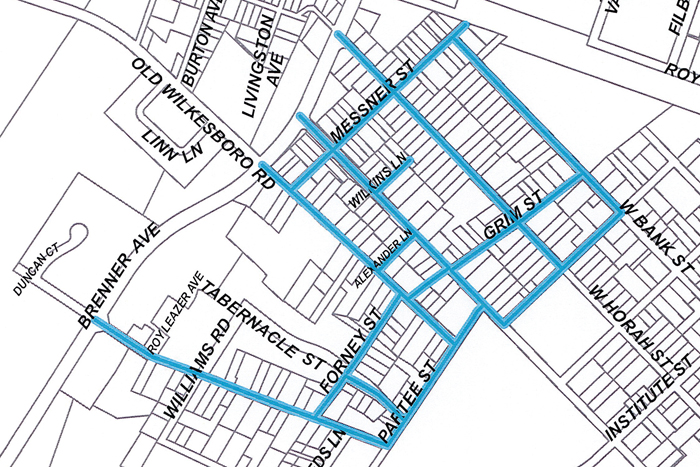 Owners of homes facing either side of the blue-outlined streets, who earn less that 120 percent of the median income, will be eligible for funding through Salisbury's new West End revitalization grant program.

SALISBURY — Residents of the West End neighborhood met Tuesday to learn of a new program available for low- to moderate-income homeowners and landlords renting to low-income tenants.

Advertised as a grant, the Housing Revitalization and Rehabilitation Program offers as much as $20,000 for owner-occupied renovations and $10,000 for rental property repairs. The money is for exterior repairs only, including roofing, windows, siding, paint and minor landscaping.

The grants, according to city Planning Director Janet Gapen, will be structured as deferred, forgivable and interest-free mortgage liens on the homes. For owner-occupied rehabilitation, liens are forgiven after five years as long as the property is not transferred or sold during that time.

For rental property repairs, liens are forgiven after five years as long as the property is rented to a low- to moderate-income tenant, defined as below 80 percent of the area median income or $44,700 for a family of four.

The City Council allocated $400,000 toward West End revitalization in the budget for fiscal year 2019. Grants will be facilitated through the Salisbury Community Development Corp.

To qualify, owner-occupied applicants must have a household income of no more than 120 percent of the city’s median income: $55,900 for a family of four.

Applicants with a family of four can have a household income of no more than $67,080.

There are no property owner income requirements for rental repairs.

“This has come about partly as a follow-up to the West End transformation plan that was done several years ago,” said Gapen. “During that time and also since, we’ve heard lots and lots of requests and concerns from West End residents about housing and needing assistance with housing rehabilitation.”

Gapen said residents cited an undeserved stigma associated with West End and that the program is meant to “improve the conditions particularly in the key gateways to the area.”

“We want this community to have a strong, safe, quality home and quality of life,” Heggins said.

But some residents expressed displeasure over the five-year stipulations on the grant and the mortgage lien structure.

Carolyn Logan said she feels a lot of people at Tuesday’s meeting had been mislead.

“If this is a grant and you were trying to help the West End, … how did it come to we’re going to loan you money? Where’s the miscommunication at?” Logan said. “… It’s just another form of gentrification, because what’s going to happen is … the city will end up getting those homes.”

Gapen said the lien is intended to ensure the grants go to help long-term residents of West End rather than potential property flippers.

“This is a program to help those invested in the neighborhood, who are living in their homes and … are committed to being there,” she said.

Residents raised other concerns and suspicions throughout the near two-hour question-and-answer session with city officials.

What would happen if a person fell behind on payments? What if grant recipients die before the five years lapse?

Gapen stressed that no payments would be due within the five-year period, and they would never be due if the resident remained in the home or continued to rent to qualifying tenants for all five years.

Chanaka Yatawara, executive director of the Salisbury Community Development Corp., said the lien would be transferred with the same terms and requirements to whoever inherited the home in the event of a recipient’s passing.

Still other questions were raised. Would the lien show up on an recipient’s credit score? Would the repairs raise property taxes?

Yatawara said “no” to both questions. He said mortgage liens are not on a person’s personal credit, but rather on the title of the home, and the maintenance-style repairs offered would, generally speaking, not lead to tax increases.

“If an entire area gets revitalized, that may happen,” said Yatawara.

Mayor Pro Tem David Post, who was unable to attend the meeting, said he had hoped the evening would have been a question-and-answer session for people to learn about the funding itself: what it can be used for, who is eligible, what is necessary to apply and more.

Applications are now being accepted for the program through the Salisbury Community Development Corp., 1400 W. Bank St. For more information, call 704-216-2738.