DG Martin: Goodbye and thanks to Dick Spanger 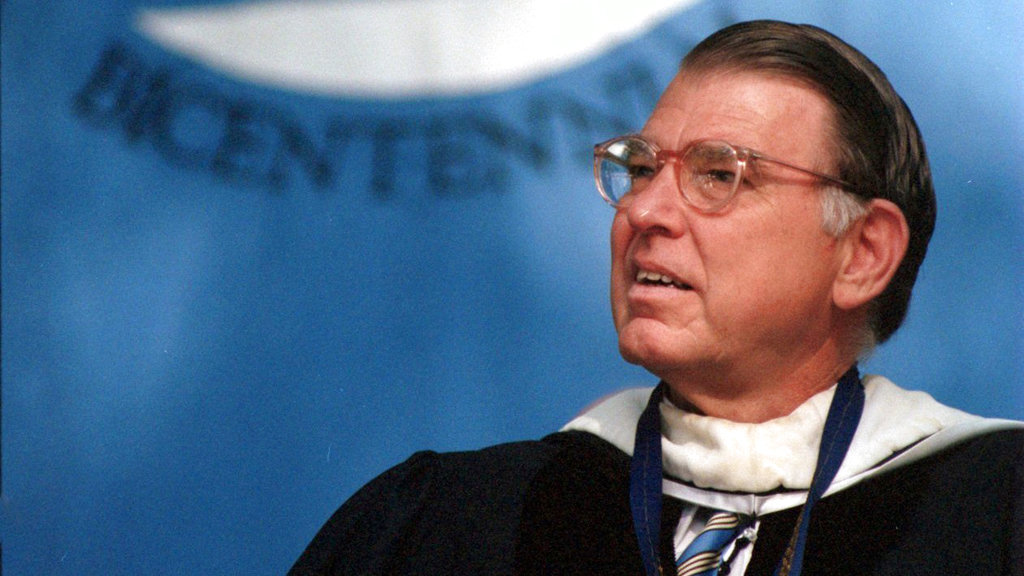 In this Oct. 12, 1993, photo, UNC system president C.D. Spangler Jr. appears at the kick off ceremony for the UNC-CH campus bicentennial in Chapel Hill, N.C. Billionaire philanthropist Spangler, who led North Carolina's university system for more than a decade, has died. He was 86. Spangler died July 22. (The News & Observer via AP)

Dick Spangler, who died last week, changed my life dramatically and forever. That makes it hard to write an objective and proper tribute to the Charlotte business leader and former president of the University of North Carolina System.

First of all, he would not have liked the use of the word “system.”

He would not have said, “Don’t use that word.”

Instead, he would have squinted, looked down over his glasses and said something like, “Are you sure that’s a word you want to use?”

That “system” word is now an official part of the institution’s name. But, for him, the multiple campuses of UNC composed one university under the state’s constitution. I can hear him following up with a reminder that the constitution requires the university’s benefits “as far as practicable, be extended to the people of the State free of expense.”

His tenacious support for “low tuition” slowed down the rising cost of public higher education, making possible the life-changing experiences for thousands of young North Carolinians.

In April, Spangler came to Chapel Hill to speak at an event honoring Wyndham Robertson, a former Fortune magazine assistant managing editor who served him as university vice president of communications. Gifts from the Spangler family helped establish a position at UNC Press honoring her.

Spangler took pride in Robertson, the first female vice president of the university, and in many other non-traditional hires, including Jay Robinson, former superintendent of the Charlotte-Mecklenburg schools who handled state government relations, and Julius Chambers, nationally-known civil rights attorney, to be chancellor at N.C. Central University.

Spangler said his job was not to know how to do everything, but to identify, recruit and support people he could trust to succeed.

Wisely, he retained the major staff members of his predecessor, William Friday. He developed a special friendship with Vice President Raymond Dawson. Dawson’s experiences in planning and crisis management were valuable assets when Spangler had to deal with controversial challenges such as the closing of programs, departures of popular coache, and proposed mandatory drug testing.

When he learned of Spangler’s death last week, Dawson said simply, “He was a good man … a good man.”

Though wealthy, Spangler had simple tastes. His office was basic. His official car was a compact so modest that it lacked an FM radio. Spangler added one with, of course, his own money.

He was also sparse when it came to staff meetings. He thought they were usually time-wasters.

An exception was a regular monthly meeting of his staff with the chancellors of the 16 universities. The refreshments were simple and standard, an old-style bottle of Coca-Cola.

For lunch, he would often go alone to the campus dining hall to mingle with students. The dining staff named the “Spangler Taco Salad” after his favorite dish.

Spangler gave back all his salary from the university, and his family has poured millions of dollars more, often, as in the case of Robertson, to honor his co-workers and others whose service he admired.

Spangler put his widespread business and social connections to use, including many cousins in Cleveland County where his father grew up. One was the late Ruby Hunt, wife of influential legislator Jack Hunt. Once, when Spangler and then Gov. Jim Hunt were at loggerheads over the university’s budget, Ruby invited them to breakfast where her Cleveland County cooking and warm spirit helped bring about a compromise.

How did Spangler change my life?

Early in 1986 when I was practicing law in Charlotte and trying to recover from two hard-fought but losing congressional campaigns, Spangler called me, saying, “I think you belong in public service,” offering me a position working for him at the university, and then giving me experiences I will treasure the rest of my life.

D.G. Martin hosts “North Carolina Bookwatch,” which airs at 5 p.m. Thursday and at 11 a.m. Sunday on UNC-TV. Today’s and Sunday’s guest is James Dodson, author of “Range Bucket List.” Next week’s (Aug. 9, 12) guest is John Hart, author of “The Hush.”