ApSeed makes a splash at State Board of Education 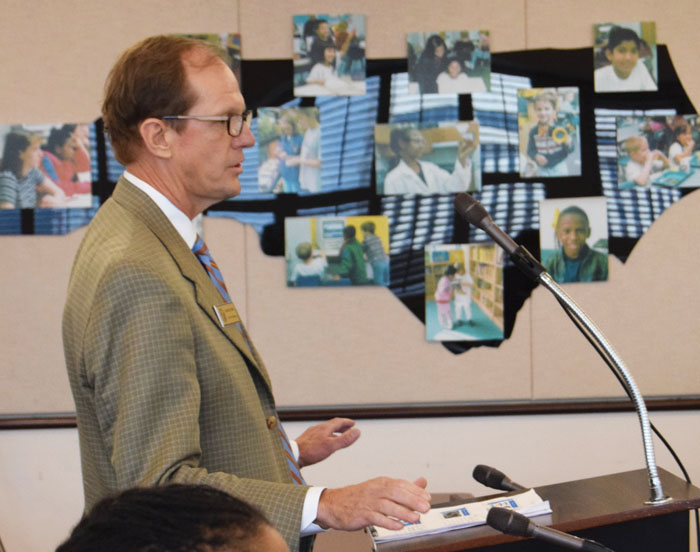 Greg Alcorn, founder of ApSeed, talks to the State Board of Education about the non-profit early literacy organization. Rebecca Rider/Salisbury Post

RALEIGH — ApSeed got a chance to shine on a statewide stage Wednesday with a presentation to the State Board of Education.

The nonprofit organization, which aims to increase early literacy among economically disadvantaged children using an e-reader, was started by State Board of Education member and Rowan County resident Greg Alcorn.

Fellow board members asked Alcorn to give the presentation, and Alcorn said Wednesday that he hoped to receive guidance and to feel out statewide distribution possibilities.

Since its launch in 2016, ApSeed has distributed nearly 3,600 free e-readers to children in Rowan and Davie counties. The custom-built devices come loaded with literacy learning apps and are locked and designed so that they can be used only for reading.

E-readers are distributed free provided parents or guardians agree to report findings and data to ApSeed for the next three years.

So far, Apseed has been funded by private donors — including Alcorn — and other nonprofit groups and affiliates.

“We’re not betting the farm on this, but we’re putting a lot of chickens into it,” he said.

Ideally, the program would receive state funding and be made available to all North Carolina children.

Alcorn was inspired to start ApSeed after learning that children raised in poverty will hear 30 million fewer words than more affluent peers by the time they enter kindergarten and by statistics such as the results of the third-grade reading test being used to determine the number of prisons.

It’s information he learned while serving on the State Board of Education.

Alcorn began Wednesday’s presentation by thanking the board for helping him find his lifelong passion.

“You have provided immense value to my life,” he said.

Alcorn walked the board through ApSeed’s timeline, including the initial plan to use iPads. It’s an idea that was quickly discarded.

“The iPads were a Ferrari automobile when we needed a bicycle,” he said.

Instead, ApSeed launched using modified Kindle Fire tablets. The first several hundred “seedlings,” as they were called, were distributed to local Head Start centers and at Salisbury Pediatrics.

The Fire soon proved to be “too restrictive,” and ApSeed switched to custom tablets. At the same time, the organization partnered with a few nonprofit software companies that provide the e-readers with free apps and books.

“We’re trying to find every single disadvantaged child in Rowan and Davie counties as fast as we can,” Alcorn said.

In the meantime, ApSeed is collecting data and anecdotal stories. Preliminary data from local Head Start agencies shows that students’ literacy proficiency has jumped from 25.07 percent to 66.86 percent between fall and spring of 2017-18. Language proficiency jumped from 23.46 percent to 71.39 percent.

While Alcorn said that, obviously, not all that growth is due to ApSeed, the numbers are still gratifying. The organization’s goals, however, are to increase the pass rate for the Kindergarten Assessment Test from 70 percent to 90 percent; to achieve a 50 percent pass rate on the third-grade reading test for students of low socioeconomic status; and to improve district school performance grades.

Hopefully, it will impact a generation.

“There is no silver bullet in education, but there are some shiny ones,” Alcorn said.

Board of Education members sang praises after the presentation.

“As a kindergarten teacher, this presentation thrilled my soul,” board member Lisa Godwin said. “…This is just a blessing.”

Recent cuts to N.C. prekindergarten programs upset Godwin and other educators, she said, but perhaps ApSeed could be the savior they need.

“I really would like our General Assembly to get on board and provide this for all children in N.C.,” she said. “… It is the answer.”

Board member Amy White said the state can choose to pay for education now — by funding pre-k programs or organizations like ApSeed — or pay for it later — with prison and welfare costs.

Board adviser Roberta Scott encouraged Alcorn to “sally forth” with ApSeed and his dream.

“ApSeed sounds like something that is needed in our state,” she said.

The board gave Alcorn a standing ovation for his work. Alcorn said he was touched, and that he knew everyone in the room shared his passion for helping children.

“We’re all in the same boat,” he said. “… It’s something that starts from the heart.”