Prep Football: West could be the best in county again 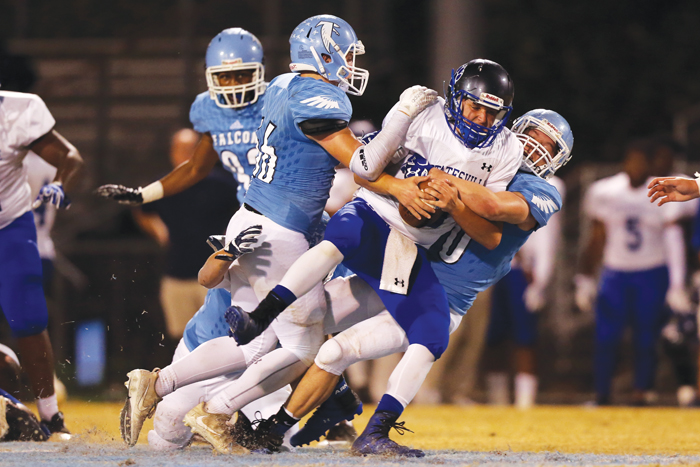 James Sipes/for the Salisbury Post West Rowan’s Baiden Suddarth (90), right, locks up Statesville QB Bryant Young (10) in the backfield as Daniel Durham (56) comes in and finishes off the sack, during a game last season. The Falcons hope to improve on a 6-6 season.

That break-even, 6-6 effort wasn’t standard operating procedure for the Falcons, who were 10-4 in 2015 and 2016.  The program still haven’t endured a losing season since 1998, but last fall the Falcons walked on the edge.

“The motto for this season is to bring it back,” said head coach Joe Nixon, who is entering his fourth season. “It’s been a while since we won a conference championship. That’s always one of our main goals.”

It’s hard to believe, but West hasn’t claimed a conference title since 2011, when it ended the season as 3A state runner-up.

That lack of fresh conference banners has been well-disguised because West has managed to maintain a secure grip on the county domination that began under the leadership of the late Scott Young. There’s been an upset loss here and there over the last decade, but when West plays North Rowan, Carson, South Rowan, East Rowan or Salisbury, 95 percent of the world still expects the Falcons to win. The Falcons also expect to win.

West was 4-0 in county games last year, but absorbed three non-conference thumpings early in the season from Mooresville, Davie County and A.L. Brown, dropped late North Piedmont Conference showdowns with South Iredell and Statesville to sink to third place, and quietly exited the playoffs in the first round with a 20-point setback against Gastonia Hunter Huss.

“Another one of our goals is always to be playing football after Thanksgiving,” Nixon said. “We fell short for the first time in a while.”

West allowed 308 points last season. To put that number in perspective, the Falcons allowed just 113 — in 16 games — when they won the last of their three consecutive 3A state titles in 2010.

Still,  Nixon is convinced that the key to bringing it back isn’t revamping the defense. It’s simply running the football more effectively.

“We threw the ball well, but a lot of teams were able to make us one-dimensional and that put us in a bind,” Nixon said. “Those six ballgames we lost, we actually had the lead in five of them. That doesn’t happen if we can run the ball better. If we can run the ball, we can put teams away. We have to do a better job of finishing people off. We feel like we left some games out there last year.”

In losses to Davie, South Iredell and Huss, West’s running game was close to non-existent — 41, 30 and 18 rushing yards. In the other three losses, West was held under 175 rushing yards. There was a time when K.P. Parks and his fierce blockers had 175 yards in the books by halftime.

Quarterback Payne Stolsworth threw 23 touchdown passes, 14 of them to Jalen Houston. They both return, so West could be scary in the aerial game. Houston possesses breath-taking, game-breaking wheels.

Jaden Perry was part of a three-man rushing committee a year ago, but now he’ll be asked to shoulder the ground load with some assistance from jayvee standout Dylan Sigmon.

West has three offensive line starters back in Logan Younce, Dawson Sheesley and Jonny Hassard, so there should be holes for Perry, who has a lot of quickness, to dart through.

The return of kicker Federico Cruz also is beneficial for the offense. He accounted for three field goals and 38 PATs.

Defensively, there are going to be new names to learn. Devin Turner, Brandon Wallace and Malcolm Ingram were out there for three years, sacking and tackling people, and they’re gone.

“You don’t replace a guy like Devin Turner  who was conference and county player of the year,” Nixon said. “But we’ll have a lot of good kids on defense. We’ve got our starting corners back, and that helps.”

West still has good numbers, relative to other local schools. Nixon welcomed 86 candidates to the first official day of practice on Monday. He’d like to have more, but so would every other coach.

West’s schedule does not include South Rowan for the first time since 1988. South is playing nine league games this season, with the addition of Oak Grove. Replacing the Raiders on the Falcons’ schedule is Cox Mill. That’s a home game for West on Sept. 28.

West will face Salisbury only in scrimmage action. That clash will occur at 9 p.m. in the grand finale of the Rowan County Jamboree hosted by West on Aug. 10.  The cost of that four-scrimmage, eight-team event is $6. All six Rowan schools are participating, along with West Stanly and West Iredell. All the Rowan schools share in the proceeds.

West also will be scrimmaging at home on Aug. 8.

The season officially gets under way on Aug. 17 with the Falcons taking the field in Mount Ulla against neighbor Mooresville. This will be the eighth straight year West has opened against the Blue Devils.

“We’re hungry and we feel like we’ve got some things to prove,” Nixon said.