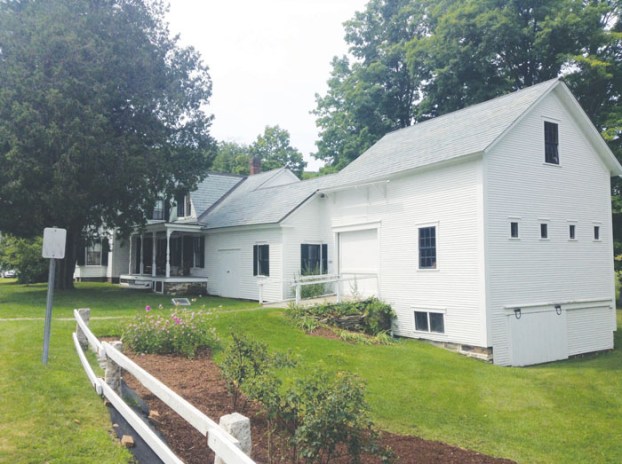 Calvin Coolidge's boyhood home, very similar to most in the area in that they were constructed in segments over the years. David Freeze

David Freeze: Lots of driving and a little cycling but the 48th state is in the books

After a pleasant night at the Tuxedo Motel in Tuxedo, New York, I went along Route 17 for an early run Monday at 56 degrees and a light northwest wind. That began a day that only had sunshine and never got over 78 degrees.

My first task was to drive from upstate New York into Vermont, and I was surprised at how quickly that happened. I was in Vermont near Bennington by about 11:45 a.m. Much of my drive was on the New York Thruway, and it cost me about $5 in tolls before it was done.

New York has texting stops on the interstate, and lots of people use them.

My first Vermont stop was at a welcome center staffed by two women. One of them seemed to know what I was going to ask before I got the words out. I told her that I had two to three days to use in Vermont and that I was driving but would be cycling too.

I left that welcome center with a 2½-day plan.

I drove Highway 7N to connect with Scenic Byway Vermont 100. Although Vt. 100 turned a bunch of times, I have never seen so many good things in a short period of time. But I was driving instead of cycling.

Back on Vt. 100, I passed through Londonderry, Ludlow and Plymouth, among other towns. All of them were founded between 1760 and 1781. Most of the architecture looks like original homes, businesses and especially the barns.

Surprisingly, nothing was very busy along the road, but I can only imagine what it will be like in the fall. All the towns are geared toward tourism with plenty of shops and restaurants and even tubing along the rivers.

There were dozens of highlights, but probably the best thing was Calvin Coolidge’s birthplace and boyhood home. It is a small settlement near Plymouth that was centered on the Coolidge farm. Most of the whole village has been restored, not as a national park but it should be.

There were plenty of unique things on display including sleighs of all types. Funeral carriages were fitted with runners during the winter. One amazing thing was that well into the 1900s, roads were not scraped here but were packed. Heavy packers were run back and forth over the snow, making the roads, then mostly dirt, more passable.

I didn’t take time for the whole tour but I do know that the Coolidges paid $300 for their house and it was huge.

I was in the state capital of Montpelier on Monday night. I was told several unusual things about state government in Vermont. There is no metal detector to enter the building, and the governor and lieutenant governor might be seen just walking around when visitors stop by. Most likely, they will take time to speak and enjoy doing so.

State representatives are not full-time employees and must take other jobs to supplement a low salary earned for working only part of the year. No gun permits are required in Vermont, and guns don’t have to be concealed.

Vermont has one of the lowest average death rates by guns in the nation and most that do occur are related to domestic violence.

Most of the roads need some repair. Bike lanes are common but run the gamut from very narrow to as wide as a car lane. I did see some cyclists but no long-distance ones.

The Green Mountains, the middle area of Vermont, are quite hilly but spectacularly beautiful. And they are green! I saw at least one 15 percent grade sign on a climb. That would be nearly impossible with a loaded bike.

There are dozens of covered bridges still in use in Vermont, many of them renovated since 2000. Flowers are everywhere. There are even flower boxes on bridges through the numerous little towns.

Maple syrup cookies are my new favorite. Moose crossing signs are numerous, and there are occasional bear signs.

I passed through Stowe and Killington, major snow-skiing venues. Ethan Allen led the Green Mountain Boys during the Revolutionary War to great victories even though his triumph at Fort Ticonderoga came while he was drunk.

Vermont had its constitution before America had one and thus, the state has a right to secede if desired.

That is a lot of information gathered in one day, and my head is spinning.

I only got three miles of bike riding in Monday, near my motel. There should be a lot more today.  I am driving early to Burlington for a day of bike riding.

On to more of Vermont. It is already one of my favorite states. See you tomorrow.

KANNAPOLIS — It’s not easy to wrangle a group of 70 children on a field trip, but the staff and... read more