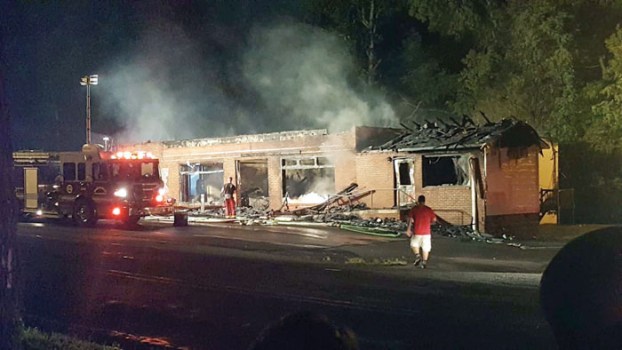 Multiple fire departments responded Monday night to a fire at West Side Cafe in Enochville. Photo by Jim Smith Jr.

ENOCHVILLE — Fire investigators say the late Monday night fire at West Side Café began at the back of the building in the roof line.

The fire destroyed the building at 615 N. Enochville Ave., leaving mostly a shell of the brick structure. Rowan County fire departments as well as the South Iredell, Shepherd and Mooresville fire departments responded.

The structure was built in 1947 and at one point was a supermarket. The building endured a fire in 1980s when it was Dal’s Bread and Bolts and owned by Dallas Campbell.

The cause of this week’s fire has not been determined yet.

She said investigators will continue to look into what may have caused the fire, including looking at videos captured by witnesses. Horne said a man who lived near the restaurant saw the fire soon after it began. He told investigators he saw the flames near the roof line.

“He saw the red glare. He saw it in the roof,” Horne said.

She said the building’s owner, Glenda Upright, does have insurance, but renter Andy Valentin, who owned Andy’s Electric Tattoo shop, did not have renter’s insurance.

According to Horne, Valentin was able to salvage a few items.

Hang out for laughs and fun on ‘Avenue Q’

By Deirdre Parker Smith deirdre.smith@salisburypost.com “Avenue Q” is where the expected happens but in unexpected ways. This musical mix of... read more