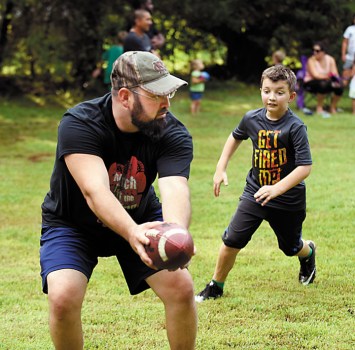 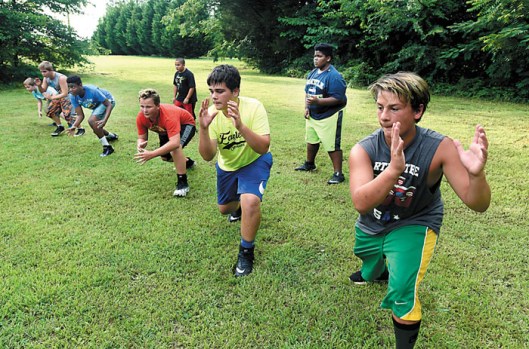 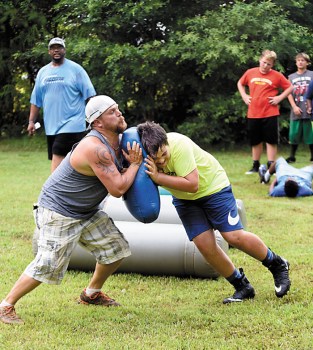 They remember exactly where they were when they heard the news of Rogers’ near-fatal motorcycle accident. Most searched for any available information about what happened to the popular coach and community volunteer.

Traveling on U.S. 70, Rogers had left work early to help a friend with moving when a car entered the roadway ahead of him. The impact at 40 mph caused severe injuries to his extremities and a major loss of blood.

He awoke two weeks later to find out that his right hand had been ripped open and his left had screws inserted to stabilize it. Rogers’ left ankle was crushed into the lower leg, and his right leg had a metal plate inserted in the knee.

“He was on a ventilator for a while and so far, he has had six surgeries and with at least one more to go,” said Rogers’ wife, Erin. “Martin has been in a hospital bed and finally a Geri Chair since then. He’s looking at about nine more weeks before he can support his own weight.”

Plans were already underway for the fourth annual Backyard Boys football camp when the accident happened. The camp isn’t the usual type that requires a high participation fee and purchase of expensive equipment. Martin, a longtime YFL coach, and Erin Rogers founded the camp so that their own son could get some training in the proper methods and football drills in preparation for fall football.

But Martin Rogers went much further by inviting all the neighborhood boys to come practice too. No fees involved. And yes, they had equipment acquired by various methods.

Rogers has his methods that just simply work.

In the early days after his accident, neighbors and friends worried if Rogers would make it at all.

“When I heard about the accident, I nearly lost it,” said coach Shawn Sherrill, who calls himself Rogers’ best friend. “I went straight to the hospital. After a while, we knew he was going to make it. Martin has no long-term injuries. Everything will eventually heal.”

Coach Brandon McCarty added, “All we worried about in the beginning was how to help the family, how to get them through this. We have worked at raising funds to help cover the medical expenses. We placed donation cans around, planned an upcoming auction, a fish fry and an event at the Lazy 5.”

The eight coaches also decided to move forward with the camp and began to spread the word. Probably more so than any year, word got around that included Rogers’ physical condition.

“Most years, we start off spending our own money and then donations come in to offset the costs,” said Erin Rogers. “Those donations will pick up now that the boys are on the field. Our first night was rained out, but it feels great to be able to finally have the camp going again.”

Mason Stuttler, a 10-year-old home-school student, is part of the camp for the second year.

“All the drills are fun, especially the agility drills,” said Mason. “All the coaches are good. They tell us what we are going to do and then they help us do it. I want to play cornerback. My favorites things at camp are the tug of war and the two-hand tag.”

Two boys are set for middle school football this season with some practices already underway. Canyon Turner, an eighth-grader at 13 years old, hopes to play linebacker for West Middle. Over the next four weeks, Canyon will practice with the school team and then walk across the road to practice with the Backyard Boys.

Martin and Erin Rogers’ son Blake is likely to be a lineman at West Middle. He has four years of camp under his belt and looks forward to it every summer.

“I love learning the different moves that lineman need to be successful,” Blake said. “I might look like a lineman, but I’d love to eventually be a quarterback.”

Each night, parents, relatives and siblings line the perimeter of the shaded practice field. Lisa Turner, mother of Canyon and Ranger, said, “When we heard about Martin’s accident, I said a prayer and thought about all the lives he has touched over the years. He is just a big kid himself and all the kids love him. And they love this camp.

“The kids look forward to it and they respect the coaches who do this,” Turner said. “I think Canyon wants to come back and help coach after his playing is done.”

Hearing the conversation, Debbie Davis added, “We watched last year as all the kids dog-piled Martin at the end of the year. He got up laughing.”

Erin Rogers’ main helper is Christina Sanchez. She is the mother of four-time camp participant Jaden and Noah, who is playing for the first year.

“Martin Rogers is a great man,” said Sanchez. “He teaches these kids like his own. Not just about football, but also about manners and life’s lessons. These parents and boys are like a big family. And Erin has shown the meaning of real love as she has cared for him since the accident.”

The Backyard Boys football camp continues on Monday, Tuesday and Thursday for four weeks and is open to second- through eighth-graders. Practices are held from 6 to 8 p.m. There is no fee — but be aware that you might just become part of Martin Rogers’ extended family.

“I’m getting better, faster than the doctors thought,” Rogers said. “All my injuries will heal.”

Look for Rogers to be at the bottom of that dog pile again in 2019 and smiling bigger than before.

Contact Erin Rogers at Backyard Boys Football Camp on Facebook and 704-239-7369. Registration for the camp is still open.