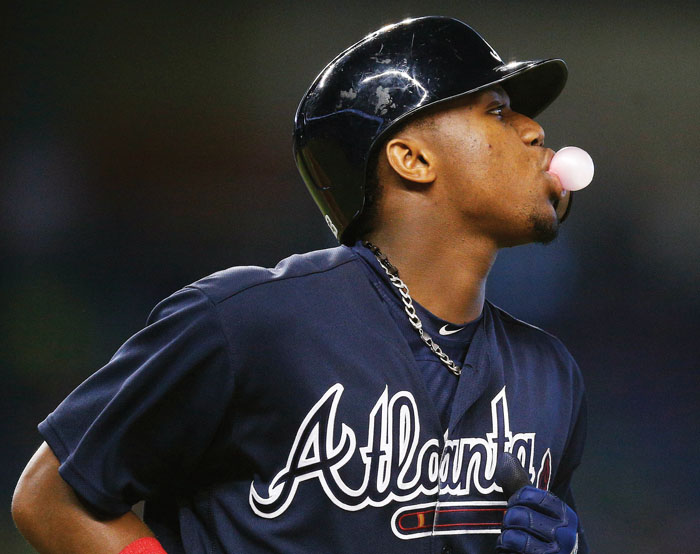 Atlanta Braves baserunner Ronald Acuna Jr. blows a chewing gum bubble as he heads to first base after a walk during the fifth inning of a baseball game against the Miami Marlins, Tuesday, July 24, 2018, in Miami. The Marlins beat the Braves 9-3. (AP Photo/Brynn Anderson)

CLEVELAND (AP) — Starling Marte, Gregory Polanco and Josh Bell each hit a two-run homer, and the Pittsburgh Pirates beat the Cleveland Indians 9-4 on Tuesday night for their 11th straight win.

The Pirates routed the Indians for the second straight night. Marte homered in the first inning, drove in three runs and extended his career-high hitting streak to 17 games.

Polanco homered and Corey Dickerson tripled in two runs when Pittsburgh scored five times in the second. Bell hit a home run in the fifth. The Pirates have homered in a season-high nine straight games, hitting 22 home runs in that span.

Shane Bieber (5-2), called up from Triple-A Columbus to make the start, allowed seven runs in 1 2/3 innings. The short outing forced the Indians to use seven relievers.

Designated hitter Edwin Encarnacion returned after missing two games with a bruised right hand and hit a leadoff homer in the fourth. Brandon Guyer added a solo homer in the eighth.

Pittsburgh rolled to a 7-0, rain-shortened win over reigning AL Cy Young Award winner Corey Kluber on Monday. The offense jumped ahead early again when Dickerson doubled to start the game and Marte drove a 2-1 pitch into the left field bleachers for his 16th homer.

Pittsburgh’s second-inning runs came with two outs. Dickerson’s drive with runners on first and second sent center fielder Tyler Naquin to the wall. Naquin attempted to make a leaping catch, but the ball glanced off the side of his glove and rolled along the track.

Marte followed with an infield hit, and Polanco belted his 18th home run to right. Bell hit his sixth homer to right off Neil Ramirez.

The Pirates are 12-2 in interleague play and have won eight in a row against AL teams.

MIAMI (AP) — Wei-Yin Chen did well again in a home game, and finally made it to home plate.

Chen pitched six innings and scored the first run of his career to help the Miami Marlins beat the Atlanta Braves 9-3 Tuesday.

The left-hander snapped a streak of four consecutive losses and won for the first time since June 16. He has an ERA of 2.18 this year at Marlins Park, compared with 10.47 on the road.

Chen (3-7) doubled to start a five-run fifth for his first extra-base hit in 82 career at-bats, and almost tried for a triple.

“I thought about going to third,” the veteran from Taiwan said through a translator. “But then I thought, ‘Maybe I should concentrate on pitching.’”

He showed his speed on bases soon enough, racing home from third on J.T. Realmuto’s grounder to stomp on the plate and barely beat a poor throw by shortstop Dansby Swanson.

“I didn’t think he would throw home,” Chen said. “If I knew, I probably would have slid.”

Chen laughed when asked the last time he scored a run.

“Probably back when I was playing in Japan,” he said. “It’s probably more than 10 years ago.”

Plenty of other Marlins provided offense, too. Realmuto hit his 13th homer and drove in four runs. Starlin Castro added a three-run homer , his eighth, and Brian Anderson had three hits and scored three times.

Chen limited Atlanta to three runs and five hits, reinforcing a home-road disparity that is the largest among major league pitchers.

Tanaka pitched a three-hitter, Austin Romine drove in two runs as the replacement for again-injured catcher Gary Sanchez and the Yankees beat the Tampa Bay Rays 4-0 on Tuesday night.

Tomorrow might bring more depth to New York’s already stellar bullpen. A person familiar with the talks tells The Associated Press the Yankees are close to agreement on a trade to acquire left-hander Zach Britton from the rebuilding Baltimore Orioles for three prospects.

Britton is eligible to become a free agent after this season, a timely summer rental for the Yankees in their pursuit of first-place Boston in the AL East.

Tanaka (8-2) retired his first 12 batters before C.J. Cron singled leading off the fifth. He struck out nine and walked one, improving to 6-0 on the road.

BALTIMORE (AP) — Tim Beckham and Jonathan Schoop homered and drove in three run each, and the Baltimore Orioles withstood four long balls by the Boston Red Sox in a 7-6 victory Tuesday night.

It was only the third loss in 18 games for the Red Sox, who have the best record in the major leagues (71-32) and a five-game lead over the New York Yankees in the AL East.

Baltimore closer Zach Britton was not used in a save situation. A person familiar with the talks told The Associated Press the Yankees are close to agreement on a trade to acquire Britton for three prospects. The person spoke on condition of anonymity because the deal would be subject to the teams approving medical records.

Brad Brach, another reliever the Orioles want to trade, worked the ninth in the rain for his 11th save. Brach put the potential tying run on second base before getting Mookie Betts to hit into a game-ending double play.

Staggering through the season with the worst record in the big leagues at 29-73, the Orioles started the rebuilding process last week by trading All-Star shortstop Manny Machado to the Los Angeles Dodgers. Victories have been hard to come by for Baltimore, especially against Boston.

With Schoop and Beckham leading the way, the Orioles beat the Red Sox for just the second time in 12 games this year and stopped a nine-game home losing streak against their division rivals.

J.D. Martinez homered twice to raise his season total to 31, and Betts and Blake Swihart contributed solo shots for the Red Sox.

Coming off the disabled list to make his first big league start since May 31 after recovering from left biceps tendinitis, Boston left-hander Drew Pomeranz (1-4) gave up four runs and six hits in 4 2/3 innings. He yielded a two-run homer to Schoop in the third inning and a two-run drive to Beckham in the fifth.

Baltimore made it 7-3 with a three-run sixth as Beckham, Schoop and Adam Jones delivered RBI singles.

Red Sox: The return of Pomeranz makes it easier for Boston to cope with the loss of LHP Eduardo Rodriguez (ankle sprain). “He was one of the best pitchers in the league last year,” manager Alex Cora said of Pomeranz. “Hopefully, we’ll have him for the rest of the season now.”

The Red Sox optioned SS Tzu-Wei Ling to Triple-A Pawtucket to make room for Pomeranz. That left Cora with a short bench and eight relief pitchers. “I love the bullpen the way it is right now,” the manager said. “I like having the extra guy out there.”