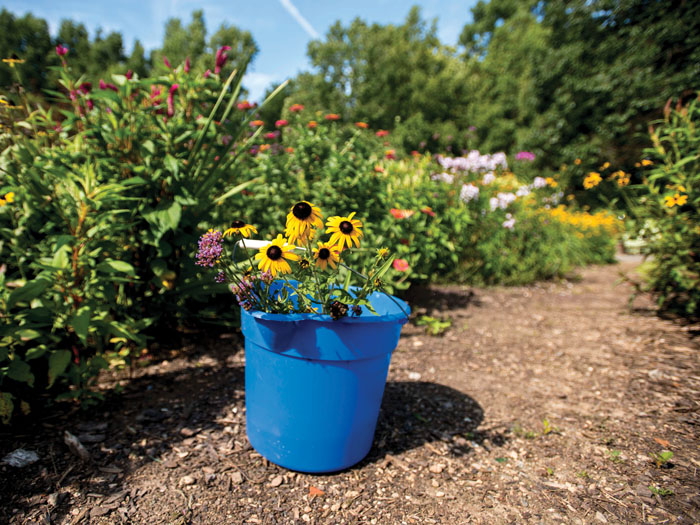 People were advised to bring their own bucket and scissors to Jean McCoy's Coffee and Cutting fundraiser Saturday. Jon C. Lakey/Salisbury Post

1. How many early-voting sites has the Rowan County Board of Elections approved for this fall’s general election?

A. One — the Board of Elections headquarters at West End Plaza

B. Two — the BOE headquarters and Dan Nicholas Park

2. Salisbury Police Chief Jerry Stokes gave City Council an update on his department this past Tuesday. Which of these statements is not true?

A. The number of commercial and individual robberies are down when this year is compared to the same time last year

B. The Police Department is almost fully staffed, with 80 of 81 budgeted positions now filled

D. Homicides this year compared to last have increased

3. The Spencer Board of Aldermen has approved an amendment to its interstate business zoning district to allow for what at the intersection of Long Ferry Road and Montclair Drive?

A. A Greyhound bus terminal

D. A terminal for trucks that will transport fly ash away from Buck Steam Station

4. What is believed to have caused the five-alarm fire that burned much of the day this past Wednesday at Holmes Iron & Metal and led to power outages in East Spencer and Spencer?

A. An electrical short in a window air-conditioner at the company’s office

B. A tree that fell on a nearby electrical substation, igniting a stack of scrapped vehicles

C. Fire from an overnight campsite on railroad tracks near the salvage yard

D. The spark from a car that had recently been brought in as junk

5. During the fire at Holmes Iron & Metal, firefighters were hampered by an inadequate water supply. Norfolk Southern helped in easing some of that problem by doing what?

A. Bringing in 10 tanker cars filled with water and parking them on a siding near the fire.

B. Boring a hole under the nearby railroad tracks so a hose could be run from a fire hydrant behind the N.C. Transportation Museum to the salvage yard

C. Calling on a corporate helicopter, usually used for getting to derailments, to drop buckets of water on the fire

D. Providing equipment and personnel from the fire brigade at Linwood Yard

6. Jean McCoy opened her expansive garden in Spencer Saturday for a “Coffee and Cutting,” which raised money for what cause?

7. A resident of The Gables at Kepley Farm, 94-year-old Chuck Campbell is nearing completion on a project he has been working on in his garage for several years. What is he doing?

A. Restoring a Model T Ford

B. Building a sailboat

8. Salisbury’s Kevin Carroll, an actor who now lives in Los Angeles, plays one of the starring roles in a new drama series called “Sacred Lies.” The 10-episode series debuts this coming Friday on what platform?

9. A special reception was held last Sunday afternoon for Riley Burton, 99, a resident of Trinity Oaks Health & Rehab. What is Burton best known for?

A. Being the first woman mail carrier in Salisbury

B. Playing the piano and organ

C. Acting and singing in some of the early Piedmont Players productions

10. Romar Morris, a former running back for Salisbury High and the University of North Carolina Tar Heels, recently scored his first professional touchdown in the Canadian Football League. Who does Morris play for?