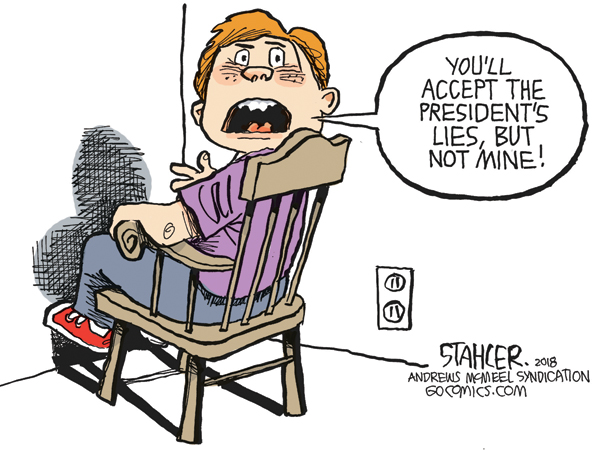 “U.S. lawmakers of both political parties reacted with shock …”

“Some of Mr. Trump’s own advisers privately said they were shocked …”

After almost two years of unending chaos, the only shocking thing about Donald Trump’s disastrous Helsinki press conference with Russian President Vladimir Putin is that some people were apparently shocked. That suggests they expected better, which, in turn, suggests they still don’t understand what we’re dealing with.

That should be obvious by now to anyone with eyes. And if it was disappointing to hear that some observers were “shocked,” it was downright gag-inducing to see certain members of his party line up to condemn him and the Trump whisperers at Fox blanch and gulp at his behavior. As if they had not long enabled, rationalized and defended with specious reasoning and strategic outrage this amateur-hour presidency.

They — along with 63 million voters — sold America out on a promise of white primacy restored and tax cuts for billionaires. That was made glaringly clear — again — on an international stage this week as Trump abased himself, and by extension, us, cozying up to an autocratic thug whose regime has strangled democracy, stolen land and murdered dissenters. Faced with such unalloyed evil, Trump did everything except roll over to have his tummy scratched.

Strained relations? He said “both countries” were to blame. Russian misbehavior? He failed to name any.

Asked about the U.S. intelligence community’s conclusion that Russia interfered in the 2016 election, he touted Putin’s “extremely strong and powerful” denial.

His nation under attack and the head of the attacking regime standing next to him, Trump was everything he professes to despise. Weak. Feeble. Impotent.

The man who thought Colin Kaepernick unpatriotic for kneeling could not bring himself to stand up for his country.

The man who insults, berates and belittles our allies could not bring himself to rebuke one of our greatest adversaries.

The man who sees threats in the eyes of Honduran children could see no threat in a murderous tyrant with nuclear arms.

It was appalling, yes. But it was also predictable. And that’s an important point, because if we are to survive this existential emergency, it starts with being clear-eyed about the clear and present danger we face. This is not a good man, not a patriotic man, not a moral, smart or brave man. All of us should know that by now.

So yes, let us be angry, be determined, be resilient, but let us not be shocked by Trump. That’s a waste of time. November is coming.

Let him be shocked by us.