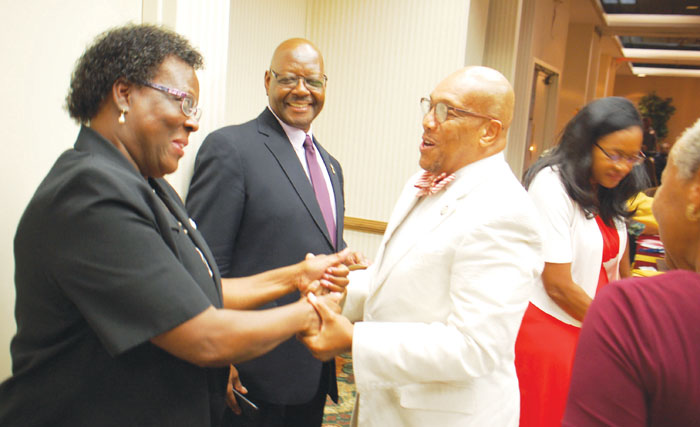 Beverly Woods greets Judge Ronald Ramsey during an after-dinner reception Friday evening for the R.A. Clement High School Association's biennial reunion. In the background is Charles Knox, Class of 1967 at R.A. Clement High, which was located in Cleveland. and at right is Ramsey's wife, Doris, in the red and white. Mark Wineka/Salisbury Post

SALISBURY — If you see a turtle on a fence post, it did not get there by itself.

Using that analogy, Judge Ronald B. Ramsey Sr. said it took the support and influence of his mother, grandparents, aunts, uncles, cousins, friends and wife to put him on the path to being a college graduate, labor negotiator, attorney, state senator and now judge in DeKalb County, Georgia.

So much of his life — and anyone else’s, Ramsey said — is about time and chance and what you do with them.

“I could have taken another path,” said the 1977 graduate of West Rowan High School, but God and the important people in his life kept him focused.

Being the first attorney in his family. Being a state senator. Being a judge. All were beyond his wildest dreams, Ramsey said, and being asked to address the R.A. Clement High School Alumni Association on Friday night was “a significant honor to me.”

Ramsey left his audience with many inspirational stories and messages, but he also sounded a warning about apathy and declining voter participation among blacks, starting with 2016, as Barack Obama’s presidency came to an end.

Members and friends of the R.A. Clement High School Alumni Association gathered Friday and Saturday for food, fun and fellowship, celebrating the Cleveland school where many attended during segregation.

“Most of us are graying or don’t have anything to gray,” Norris Anderson said.

The alumni association was established in 1976, and it holds Clement School reunions every two years.

“We have worked tirelessly to make this the best reunion ever,” said Carolyn Steele Snipes, president of the association.

The alumni’s main focus has been raising money to complete the preservation and restoration of the old school off Krider Street in Cleveland next to the town park. Volunteers started those efforts 15 years ago.

R.A. Clement School was built in 1929 as a Rosenwald School. It served students until West Rowan High School became fully integrated after the 1967-68 school year.

During his talk, Ramsey noted how the Julius Rosenwald Foundation — with financial support from black communities — provided seed money for 5,357 schools in 15 Southern states from 1913 to 1932. Of those, 813 were in North Carolina, including R.A. Clement School.

The school was named for Rufus A. Clement, who had been born into slavery in 1847 and donated land for the Cleveland Colored School in 1878. That school opened in 1880. By the 1929-30 school year, a Rosenwald School was in place, and in 1943, it was officially named for Clement.

The memories of classmates, teachers and the building itself hold special places in the hearts of alumni and the children and grandchildren of those who attended Clement School.

Joining Ramsey as speakers Friday night were Charles and Marsha Steele Knox. Charles Knox graduated from Clement High School in 1967, and Marsha, who had made the transition from Clement school earlier, is a 1968 graduate of West Rowan High.

The 1967 and 1968 classes of Clement High were recognized for their 50th anniversaries during this biennial reunion.

A special guest Friday night was Mary Knox, wife of the late George C. Knox, a beloved principal at the Clement school.

In seeing all the Clement school faces, Knox said it was the first time she had not been sad since her husband died. “I want you to know he loved you dearly,” she said.

George Knox was in declining health the last seven years of his life, but he never forgot his students, Mary said. She recalled one of his fitful sleeps when she heard him talking to himself about 2 a.m.

Mary tried to answer him, but he told her, “Mary, I’m not talking to you. I’m talking to my students.”

Leonard Hall of the West Rowan Advisory Board gave an update on the Clement building’s needs, adding that installation of a new heating and air-conditioning system is “the big elephant in the room.”

Darlene Ellis Gaither also reported on the summer activities being conducted at the school.

“We have to reach our children,” she said. “… It takes a community.”

During her recognition of teachers, Doris Lovell Noble said Clement school “has too much history, too much rich history to let that building go down.” Noting she is 71, Noble said it will be up to her daughter, grandchildren and others of younger generations to preserve Clement school and its meaning.

“Once they get the idea of what we went through to get where we are now, they’ll understand,” Noble said. “… Let’s build a foundation with our young folk.”

Beyond its efforts to preserve the school and its legacy, the alumni association has been providing scholarships to students since 1977. The recipients in 2017 were Raymon Gray, Keshun Bradley, Destini Shaver and Johnathon Polk.

The alumni association lit three memorial candles Friday. They burned for George Knox, the principal who died in 2017; Iris Ozell Patterson Tucker (Class of 1949), who before her death this year had never missed an alumni gathering; and for all the R.A. Clement students and teachers who have passed away.

Many individuals, families, churches, foundations, nonprofit groups, businesses and the town of Cleveland have supported the alumni association through the years. The weekend’s souvenir booklet was furnished by the Livingstone College print shop.

Charles Knox, who lives in Whitsett, retired four years ago as a health and safety compliance officer with the N.C. Department of Labor. As he was walking out of his Winston-Salem office on his last day, Knox said people kept asking him what he was going to do in retirement.

Knox has been mentoring elementary school boys through a literacy program sponsored by his fraternity, Omega Psi Phi.

She said when you have a good group of teachers, “you can do a lot of stuff with nothing, and that’s what we did in our school.”

“R.A. Clement was our good beginning,” she said.