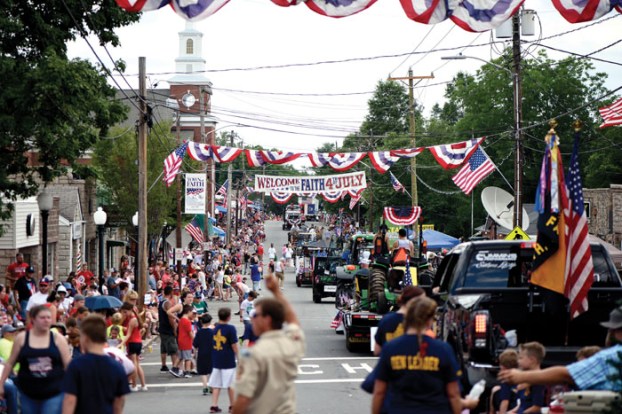 Even when July 4th falls in the middle of a week you can count on fireworks displays, flags hanging, neighbors gathering for cookouts, watermelons being sliced and just maybe you might find someone cranking homemade ice cream.

Whether it is the Croaker Festival in Oriental, Christmas in July at West Jefferson, the NC 4th of July Festival in Southport or Independence Day at Lake Junaluska, almost every community has a parade, arts and crafts festival, entertainment event or fireworks to observe the holiday. And in most instances there’s a group like a civic club, church or volunteer association providing the leadership and manpower to make it happen. It is a time when folks demonstrate pride in their communities.

As a young man I was asked to chair the Jaycees’ annual citywide “Clean Up, Paint Up, Fix Up Week.” The local paper printed lists of volunteer opportunities and radio stations promoted which clubs were undertaking certain projects, sometimes even broadcasting on site to showcase an effort. Everyone joined together to make our community more attractive, but the efforts also helped us feel better about the place where we lived and worked.

Not too many years ago when you approached the outskirts of a town you would see a sign proudly displaying all the symbols of the civic clubs that were active in that community. If you were in business or a profession it was pretty much expected that you would join one of them. Not only was it the way to form friendships, but at most club meetings there were speakers who talked about issues like education, healthcare, cultural events or projects worth undertaking in town.

Our state has a rich heritage in civic clubs and groups, dating back as far as 1873, when farmers joined together to form the N.C. Grange. Our state’s first Rotary club was organized in Raleigh in 1914. Kiwanis and Civitan clubs followed around 1919, with the Lions Club coming in 1922, Optimists in Asheville in 1923, Exchange in Wilmington in 1924 and Sertoma in 1925. In 1934 the Pilot Club, a women’s service club, was organized in Winston-Salem. Ruritans followed in ’35 and there were groups for young people like 4-H and FFA.

Many were attracted because they shared the ideals of the group and recognized that collectively they could do more than any one person could do individually. There is little doubt that these local clubs helped make our towns and cities better places to live but, more importantly, they instilled in us a sense of pride in our community.

Many today are lamenting the plight of small towns in our state, wondering what can be done to help resurrect once vibrant communities. There is no simple, single solution, but a good first step might be to join in restoring civic pride in your hometown. And there’s no better way to achieve this than to join and actively participate in rejuvenating and strengthening civic clubs, local churches or other volunteer organizations. Many of them have also declined in membership and activity.

The best way to help others, find values worth following and restore civic pride is to become part of something bigger than yourself. If enough of us get involved we might be surprised what a difference it makes.

Bob Corker, the outgoing Republican senator from Tennessee, recently compared supporters of President Trump to members of a cult. The... read more