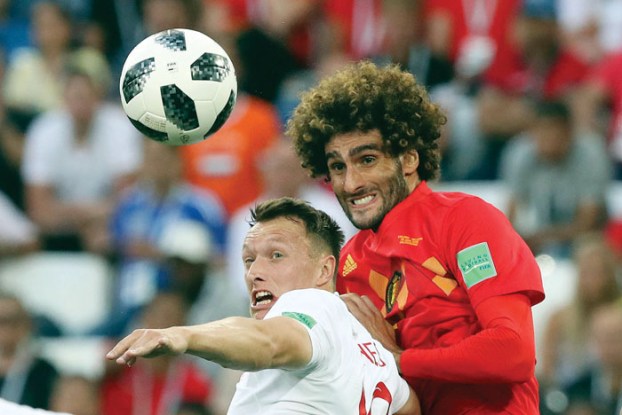 England's Ashley Young, left, and Belgium's Marouane Fellaini challenge for the ball during the group G match between England and Belgium at the 2018 soccer World Cup in the Kaliningrad Stadium in Kaliningrad, Russia, Thursday, June 28, 2018. (AP Photo/Czarek Sokolowski)

Jim Mullen: There’s one thing stopping soccer fever in the US 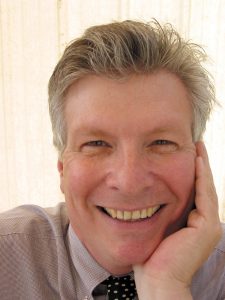 I’ve been forced to watch a lot of World Cup football this year, because I’ve been traveling outside the the U.S. If, like me, you don’t follow soccer, it’s hard to imagine what a news-dominating event this is for the rest of the world.

Each soccer-playing country recruits a team of all-star players and hopes for four years of bragging rights. When underdog South Korea stunned defending champion Germany, it was front-page news. When France smacked down Argentina in a 4-3 match, for days, the only news was how unusual it was to have such a high-scoring game. A 4-3 score in soccer is like a 50-40 win in a baseball game. It’s unheard of.

Every hotel lobby and bar TV blared the Portugal/Uruguay match. It was the same in Spain for the Spain/Russia meet-up, where the Russians upset Spain with a tie-breaking penalty kick. England also upset Colombia in a penalty shootout. All of Colombia wept bitter tears, but there was dancing in the streets in England.

And this is just the quarterfinals. The final game will be July 15.

Soccer at this level is a high-contact, brutal game. Imagine a basketball game where you’re allowed to stick your foot between the legs of a guy dribbling full-bore towards the hoop. Imagine punting a football with your forehead. It is a game of elbows in the face and aggressive shoving and pushing. They use no sissy shoulder pads, no wimpy helmets. Soccer makes American football players look like medieval knights in armor who are afraid of a little groin pull. It makes hockey look a walk in the park.

Before this trip, I’d watched 10 minutes of soccer in my life. It was a college playoff game where my full-ride-sports-scholarship niece was carried off the field with a broken leg when a player kicked her instead of the ball. She’s fine now, but she never played soccer again.

I understand a lot of parents are concerned about their children playing American football due to the news about permanent brain damage. But if they think soccer is a safer alternative, they might want to tune in to a World Cup game. It’s not as safe as they think. Nothing’s 100 percent safe, but track and field, tennis and golf are looking better all the time.

The action is nonstop. You can almost see the players lose body weight through sweat as the game goes on. Soccer games have two nonstop halves, 45 minutes each, with a 15-minute halftime. The games, with some exceptions, will last for one hour and 45 minutes. An American football game, on the other hand, has a clock time of just one hour. In reality, it lasts four hours, with pauses every 15 seconds for penalties, timeouts, quarters and scoring celebrations. And all those pauses come with commercials.

I don’t care how many schools have varsity soccer teams, or how well our soccer teams do at the Olympics. Unless the timing rules change, you are never going to see Monday Night Soccer on a major U.S. TV network.

There’s no money in it for them.

Even when July 4th falls in the middle of a week you can count on fireworks displays, flags hanging, neighbors... read more