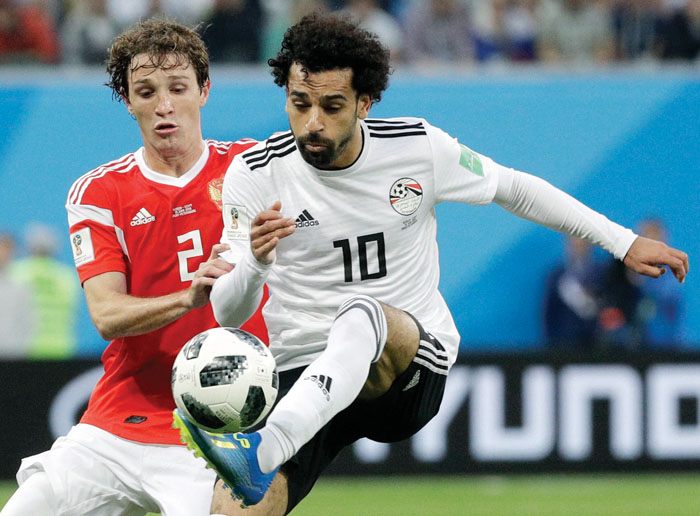 Russia's Mario Fernandes, left, challenges for the ball Egypt's Mohamed Salah, right, during the group A match between Russia and Egypt at the 2018 soccer World Cup in the St. Petersburg stadium in St. Petersburg, Russia, Tuesday, June 19, 2018. (AP Photo/Gregorio Borgia)

Russia is enjoying quite the party at its own World Cup — and not even the highly anticipated return of Mohamed Salah could slow it down on Tuesday.

Confounding grim pre-tournament predictions, the host nation earned a second straight emphatic victory to start the group stage by beating Egypt 3-1. Having already routed Saudi Arabia 5-0, Russia is likely to be celebrating a spot in the round of 16 by Wednesday evening and few could have seen that happening so soon.

“It’s a group of solidarity and cohesion,” said Russia coach Stanislav Cherchesov, who whipped up the crowd by waving his arms in delight on the field after the final whistle. “You mention difficulties, problems. We don’t like these words. We don’t have this in our vocabulary. We had some issues and we dealt with it.”

Like a string of pre-tournament injuries that ravaged the defense. Like a run of seven winless games heading into the tournament. The Russians started the World Cup as the lowest-ranked team at the tournament at No. 70, but they aren’t playing like it.

Three goals in a 15-minute span early in the second half did the damage against Egypt, with Ahmed Fathi poking the ball into his own net — the fifth own-goal of the tournament — to put Russia ahead in the 47th minute. Denis Cheryshev, with his third goal of the World Cup, and striker Artyom Dzyuba then scored in quick succession before Salah won and converted a consolation penalty in his first game back after 3 1/2 weeks out with a shoulder injury.

Salah needed to produce the type of performance he delivered nearly every week for Liverpool this season, when he scored 44 goals in 51 games, but it was clear from the start that he was staying out of anything too physical on his return from damaged ligaments in his left shoulder sustained in the Champions League final.

Aside from his goal, Salah was quiet in his first ever match at a World Cup, much to the dismay of the Egypt fans in the stadium who roared every time their star player’s face flashed up on the big screen and when his name was announced before kickoff. Not to mention the 90 million Egyptians back home.

“I was told by the medical staff that he was fit, feeling good,” Egypt coach Hector Cuper said. “He couldn’t prepare with us in the training camp, he had to train alone. Maybe that meant his total physical ability was reduced.”

Egypt’s first World Cup in 28 years could be over in barely five days, while Russia’s place in the round of 16 will be assured if Uruguay wins or draws against the Saudis on Wednesday.

The match between Russia and Uruguay in Samara on Monday is likely to determine which teams finish in first and second place in Group A, with Spain and Portugal likely lying in wait in the round of 16.

As for Egypt, a first win at a World Cup at the seventh attempt is the aim when it plays Saudi Arabia in Volgograd on the same day.

Russia neutralized Salah in the tense but low quality first half, with Yuri Zhirkov dealing well with the Premier League’s player of the year particularly when he got in front to him to clear a dangerous cross early in the first half.

The Russians then took advantage of Egypt’s defensive mistakes to cruise into a three-goal lead out of nothing. Fathi’s attempted clearance for the first goal was sloppy, as was Ali Gabr’s attempt at closing down Dzyuba for the third goal.

Cheryshev, who entered the World Cup as a fringe player, is proving lethal in front of goal and is surprisingly tied as leading scorer with Cristiano Ronaldo.

The five own-goals at this year’s tournament is only one off the record for a whole World Cup, set in 1998.

This story has been corrected to show that Russia started the tournament as the lowest-ranked team at No. 70, not the second lowest-ranked at No. 67.