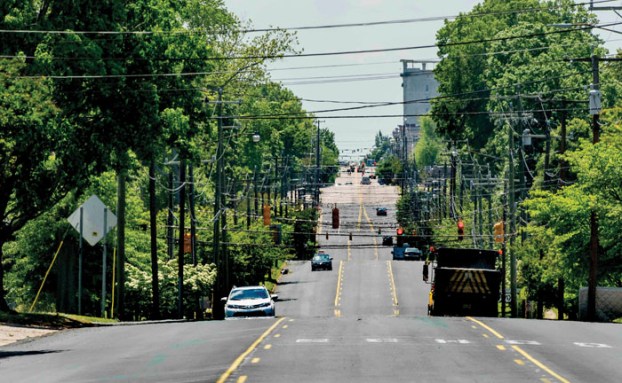 Motorists traveling along North Main Street in Salisbury are having to adjust for new traffic patterns between the railroad crossing near Richard's BBQ and the Spencer City limits. The newly asphalted roadway has been reduced from a four lane road to a two lane road with a center turning lane and room for bicycle lanes near the curbs. Jon C. Lakey/Salisbury Post

Letter: North Main is a mess

Would someone please tell the lunatic who managed to get everyone else to swallow the terrible redesign of North Main Street hook, line and sinker to please take his/her “creativity” when it comes to roads somewhere else, like Australia or Pluto?

Why in the world would anyone take a street as wide as North Main and reduce it to a single travel lane in each direction, add bike lanes wide enough for compact cars, and cause so many current and potential traffic flow headaches?

Try driving from the railroad tracks into Spencer at the end of a business day. Given Salisbury’s mismanagement over the years, I’m not surprised. Are we that desperate for bike lanes in that area that you would screw up an entire street’s traffic pattern? We don’t need a turn lane that is as wide as the deck of an aircraft carrier, either!

Before the permanent paint stripes go down, please, please — somebody with enough common sense — please pull the plug on this insanity before it’s too late. The street is plenty wide enough for four lanes of traffic and two bike lanes as is!

While you’re at it, please put the traffic lights at Eleventh Street back onto a trip sensor instead of a timer. I swear! It’s enough to make you weep.

You might want to revisit those bike lanes along Confederate Avenue. Replace the bicycle symbols  with symbols of yard debris, since that’s the only thing I’ve seen occupying those lanes since they were put in place.

While you’re at it, how about paving the entire street. There isn’t one meter or manhole cover that’s level with the street. Why? There are so many cracks, holes, and sunken areas. It’s like driving on the moon! Where’s my back pill?

D.G. Martin: It’s not too late to honor sacrifice

You did not get to a parade or service on Memorial Day. You can’t get to the Normandy beaches this... read more