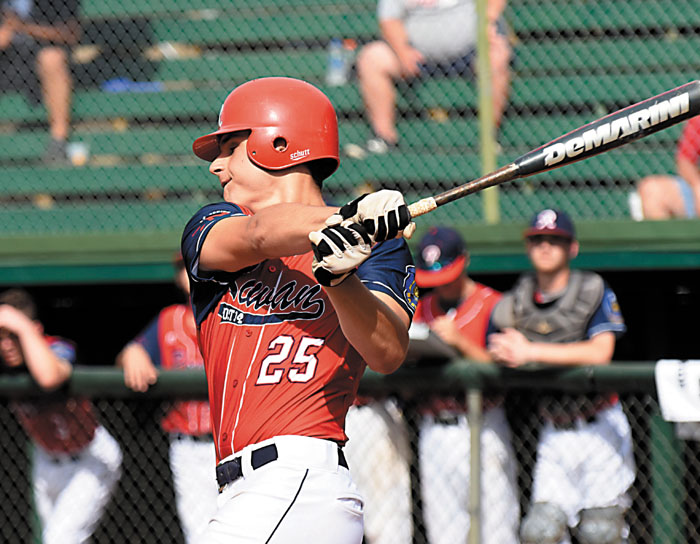 SALISBURY —  Down 6-3 to Cherryville in the eighth inning at Newman Park, Rowan County was staring at its first defeat of the American Legion summer and slugger Luke Barringer was staring at a full count with two teammates on base.

“I’d fouled a pitch straight back early in the at-bat, so I had the pitcher’s fastball timed,” Barringer said. “But that pitch was a good pitch to hit, and I was afraid I wasn’t going to get another one in that at-bat. But I worked the count back to full, and then I got one right down the middle on 3-and-2.  It was a fastball, and I was sitting fastball and I saw it good. That one, I knew it as soon as I swung at it — it was gone. That one felt good.”

There was no doubt about it. Barringer’s blast soared over the scoreboard in left-center, and a game that appeared lost, a game in which Rowan had been scratching and clawing just to stay close, was suddenly, 6-all.

Rowan went on to win, 7-6, in the bottom of the 10th when Bryson Wagner’s walk-off sacrifice fly got Olen Stamper home from third base. Rowan moved to 9-0, and while it was just a non-league game, it was still the best and most exciting victory of the season. Rowan played a lot of people, but it still topped a club that is annually one of the teams to beat in North Carolina.

It’s been a wet season of seven-inning games, but Rowan was fortunate this one was scheduled for nine. Cherryville would have won if they’d only played seven.

Rowan got solid pitching, better than the score sounds. Daniel Sell started and made it to the third inning. Daniel Durham was strong enough in long relief to give Rowan a chance to rally. Carsen Bailey, an unheralded rising senior from West Rowan who had zero wins and an ERA of 11.67 during the high school season, was great at the end and picked up the win. Bailey struck out the side in the top of the 10th and that gave Rowan a lot of momentum going to the bottom half.

Rowan scored first. East Rowan slugger Wayne Mize knocked one out of the park to dead center to start the bottom of the second.

Barringer, who has been batting eighth in the lineup, tripled — there aren’t many of those at cozy Newman Park — and scored Rowan’s second run on an infield out.

“I saw that ball going off the wall and they didn’t play it very well and it started rolling back toward the infield and I was able to get a triple,” said Barringer, who was Carson’s cleanup hitter, providing the protection in the lineup for superstar Owen White. “I’m not sure why I’m batting eighth,  but it’s all right with me. I don’t mind at all. All that matters is being in the lineup somewhere.”

No. 8 batters don’t get pitched to quite as tough as middle of the lineup guys, and maybe that’s the reason Rowan is hiding Barringer in the No. 8 hole. No. 8 hitters usually gets pitches to hit and they usually get fastballs to hit. Barringer is hitting them hard.

Things started going Cherryville’s way in the top of the third. Brett Eury failed to get a bunt down with two teammates on base, but that turned out to be a lousy break for Rowan. Eury had to swing away and he promptly swatted a three-run homer. Cherryville got four runs in the inning and led, 4-2.

Hayden Setzer got one run back for Rowan with a solo homer in the third, but Rowan bats fell silent against Cherryville reliever Dalton Pence, who had replaced starter Brent Walls.

Cherryville (6-3) got a run in the sixth when a two-out walk to the No 9 batter was followed by a ringing double by lead-off man Austin Treadway, who had three hits. When catcher Wade Walker homered in the eighth, Cherryville’s lead swelled to 6-3, and by that point, Rowan had made numerous lineup substitutions.

Maddux Holshouser walked to start the bottom of the eighth.  Stamper came through with a base hit. That set the table for Barringer, and  his one-out missile tied the game.

Bailey took care of Cherryville’s hitters with the help of a line-drive DP to second baseman Matthew Mathis in the ninth.

Eventually Rowan staged its winning rally in the 10th. Stamper’s solid double got it started and he moved to third on a wild pitch. After a strikeout, Barringer was at the plate again, but he was walked intentionally this time.

“I think that was my first intentional walk of the season,  high school or Legion,” Barringer said. “It didn’t make me mad. I used to get walked all the time in middle school. I had a pretty big year in middle school.”

No. 9 batter Bryson Wagner, Rowan’s dependable shortstop, was next. Cherryville (6-3) was looking for a double play grounder, but Wagner got the ball in the air to left-center, and the winning run scored easily.

“Bryson did exactly what he needed to do,” Barringer said. “Great at-bat.”

Rowan continues to do everything it needs to do in order to win. Randolph County, a friendly rival and always one of the area and state’s best teams, visits Newman Park tonight for a seven-inning contest. Well, at least it’s scheduled for seven.