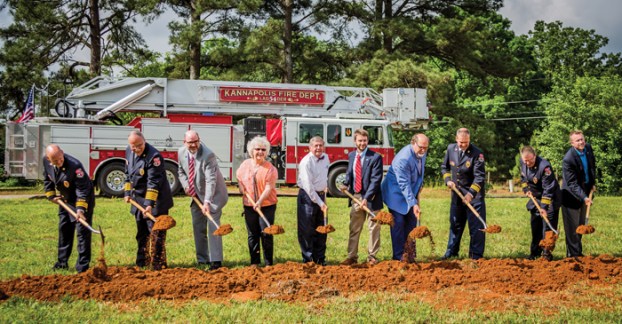 Fire Stations 2 and 3 have exceeded their lifespans. The decision to build new facilities was made after studies showed the stations would cost more to renovate than to replace.

Kannapolis City Council members were on hand along with city officials and staff members to break ground on Fire Station 3.

The station will relocate from Florida Avenue to 3 acres at Concord Lake and Old Earnhardt roads.

A larger station cannot be constructed on the small lot where it is currently located. The new site is more centrally located, will allow for quicker response times to a larger area of the city, and is in a commercial area versus the residential neighborhood where it is now.

Fire Station 2 will remain at its current location on Richard Avenue. The old station will be demolished and a new one built.

“We are fulfilling a need in our community,” said Mayor Darrell Hinnant. “With the growth of our city comes the need to be prepared for emergencies. These two stations will allow us to be ready to meet the needs of our residents when they have an emergency situation.”

“The stations will give us the opportunity to have training spaces and other facilities we need to house equipment and trucks each station in the city requires in order to meet the emergency needs of Kannapolis residents,” Hiers said.

Fire Station 2 was built in 1963. With only 1,838 square feet, it was designed as a volunteer fire station. There are no living quarters for firefighters and only one bay to house a single firetruck.

The building has inadequate space for firefighters to work and train.

Fire Station 3 was built in 1967 and has 3,200 square feet with two bays. It also originally housed a volunteer fire department.

Firefighters are using a mobile structure for their living quarters because of inadequate space. Additional space is needed for both personnel and equipment.

The facilities were inherited by Kannapolis once the volunteer departments disbanded and the city formed its professional department.

The new stations will have the same design and layout. Each will be 11,000 square feet, accommodate two firetrucks, and have eight bedrooms and four bathrooms. The stations will open in 2019.