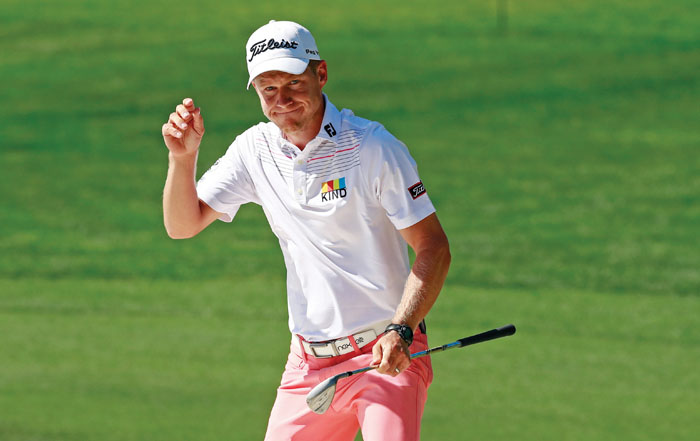 Peter Malnati waves to the crowd after his shot on the fourth hole during the second round of the Wells Fargo Championship golf tournament at Quail Hollow Club in Charlotte, N.C., Friday, May 4, 2018. (AP Photo/Jason E. Miczek)

CHARLOTTE (AP) — Peter Malnati and Tiger Woods both had reason to celebrate on the ninth green at Quail Hollow at the end of their rounds.

Malnati was coming off two straight birdies to take the lead Friday in the Wells Fargo Championship when he put his 5-iron in a deep bunker to the right, with the green running away from him. He was trying to blast out to 15 feet, but he got the club too much under the ball and feared for the worst until it cleared the lip by inches.

Malnati emphatically wiped his hand across his brow, made the 6-foot par putt for a 3-under 68 and had a one-shot lead over Jason Day and Aaron Wise.

“Pretty scary when I hit it,” he said. “I got away with it, looked like a genius.”

Hours earlier, Woods stood over an 18-foot putt on No. 9, his final hole of another ordinary round that up until then featured no birdies. He finally made one, and stretched out both hands in mock celebration when it dropped.

Never mind that it was the only putt he made longer than 5 feet. Or that he was nine shots out of the lead in a tie for 48th, his worst position through 36 holes in his last five tournaments. At least he was still playing on the weekend at Quail Hollow, where he had missed the cut his previous two trips. That putt made certain of it, though Woods made it the cut with one shot to spare.

Rory McIlroy and Phil Mickelson also had to sweat it out.

McIlroy, the only two-time winner at the Wells Fargo Championship, celebrated his 29th birthday on Friday by matching his worst score at Quail Hollow with a 76, including three bogeys over the last five holes.

He was in the same spot as Woods, nine shots out of the lead.

“Struggled with my game, struggled to get my ball in the fairway, made some pretty bad mistakes, didn’t birdie any of the par 5s,” McIlroy said. “It just was one of those days where I just couldn’t get anything going.”

Mickelson wasn’t that wild — three bogeys, two birdies, another 72, and he made the cut with one shot to spare.

Malnati rarely is without a smile, even though this is the last year of his exemption from winning an opposite-field event in Mississippi in the fall of 2015. He had reason to celebrate the par, if for no other reason than it was the first time he has led after any round except the final round when he won the Sanderson Farms Championship.

He is not long or regarded as a pure striker of the golf ball, which is not a great combination at this level. Making it worse was that Malnati was caught up in results, which have not been good, and he wanted to get back to trying only to be at his very best over every shot.

He was at his best over the last three holes Friday.

Malnati got a hybrid high enough in the air to land softly on the firm green at the par-5 seventh hole, setting up a 25-foot eagle attempt that he narrowly made. Facing a delicate pitch on the next hole from about 50 yards, to a slightly elevated green with the pin on a slope, he got that to 10 feet and holed the putt.

And then came his par save from the bunker, which felt like a birdie.

Wise, the former NCAA champion from Oregon, shot 32 on the back nine with three birdies over the last five holes. He made the turn and was looking to stay in the lead until a sloppy bogey on the par-5 seventh, the second-easiest at Quail Hollow.

The more daunting names on the leaderboard were right behind the final group of Malnati and Wise — Day (67) also was one shot behind, with Paul Casey (68) and former Masters champion Charl Schwartzel (67) another shot back.

Day won at Torrey Pines in a playoff earlier this year, the first step on the road back for the former No. 1 player in the world. He wasn’t overly spectacular because Quail Hollow hasn’t allowed a score better than 65 so far. He made birdie on the two scoring holes on the front nine. He holed a bunker shot for eagle on the par-5 10th. What really pleased him was a 7-iron from 195 yards to pin-high on the par-3 17th, and the birdie putt he made from just inside 30 feet.

“I was saying yesterday the iron play just needs to tighten up. I think once that starts to happen, then things are going to switch pretty quickly,” Day said. “And it was good to be able to come to a golf course like this where I know it’s very difficult. I think everyone else is obviously having a tough time with it, too. It’s a major championship golf course, so you’ve got to come out and be patient with yourself and take your chances when you get them.”