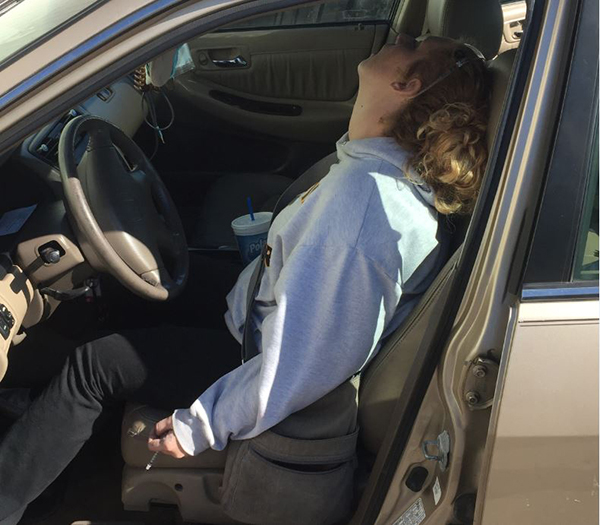 Erika Hurt had become the face of drug addiction.

The young mother was captured in a photograph by police, passed out in the driver’s seat of her car outside a Dollar General store in Hope, Indiana – an empty syringe still resting between the 25-year-old addict’s fingers.

The snapshot captured yet another horrifying moment in the worsening U.S. opioid epidemic.

What was not seen that Saturday afternoon last October was her 10-month-old son, buckled into his car seat in the back.

When Hurt first saw the photo, she was humiliated.

“I was angry and I wanted to blame the police for putting my business out there and showing the world my private addiction and everything like that,” she told NBC News, a year after the image went viral.

But the photo, she said, eventually had a sobering effect.

“I’m thankful now that the cop did take the picture. The fact that I’m able to look back on that picture and see where the addiction had taken me, and I’m able to use that picture now to show others that addicts can recover.”

Hurt reposted the picture over on Facebook to celebrate one year of sobriety.

“I’ve decided to repost the picture simply because it displays exactly what heroin addiction is,” she wrote. “Also because I do not want to ever forget where the road of addiction has taken me.

Six months ago, President Donald Trump declared the opioid epidemic a public health emergency, calling it the “worst drug crisis in American history” and vowing to focus the nation’s attention on resolving it.

“As Americans, we cannot allow this to continue,” he said. “It is time to liberate our communities from the scourge of drug addiction. We can be the generation that ends the opioid epidemic. We can do it.”

Despite Trump’s call to action, critics questioned the merits of his pronouncement, given that it did not include an immediate request to Congress for emergency funding.

“America is hemorrhaging lives by the day because of the opioid epidemic, but President Trump offered the country a Band-Aid when we need a tourniquet,” said Sen. Edward J. Markey, D-Mass. Markey called the announcement “nothing more than a dog-and-pony show in an attempt to demonstrate the Trump administration is not ignoring this crisis.”

Since 2014, more than 28,000 people in the United States have overdosed on opioids and died, according to data from the Centers for Disease Control and Prevention. Specifically, heroin overdose deaths have quadrupled since 2010.

Behind the grim statistics are haunting scenes of overdosed victims – and the children affected by their parents’ addictions.

Disturbing photographs and videos depicting scenes such as the one in which Hurt was found unconscious have become common as the epidemic rages.

In September 2016, a chilling photograph distributed by authorities captured the innocence lost on a 4-year-old’s face in East Liverpool, Ohio, where a man and woman were seen slumped over after overdosing in a vehicle, the boy still strapped into his car seat in the back.

A week later and 600 miles away, at a Family Dollar store in Lawrence, Massachusetts, a hysterical toddler was captured on a cellphone video as she tried to wake her mother after an apparent drug overdose.

“For this girl to have her life ripped up and then come back and be sober after everything that’s happened to her, that’s a story of success,” Tallent told NBC.

Hurt had tried to get sober before – going through rehab only two weeks before her overdose photo spread across the internet, and then relapsing, she said.

“I was driving home and I just knew that at some point, I wanted to use, because I didn’t want to feel the pain that I was feeling,” she told NBC this week.

“My son was asleep in his car seat,” she said, “and I used the justification that he’s too young. and he doesn’t know what’s going on if he does see me.”

As The Post’s Kristine Phillips reported, police believed Hurt had overdosed on heroin and was given two doses of Narcan, which reverses opioid overdoses in emergency situations.

Hurt ended up in jail, where she said she first saw her photo, splashed across TV screens.

“I was just shocked, I was humiliated. I really had no words,” she told NBC affiliate WTHR.

Now, she said, she is “very thankful that someone decided to capture that moment.”

“I’d been struggling with addiction for a long time,” she said, telling WTHR that she had been battling addiction since she was 15, taking prescription painkillers for a staph infection. “I’ve been to the point where I was wanting to get clean and didn’t know how. I was trying but always failing.”

Being able to see what her addiction looked like has enabled her to overcome it, she said.

“Before, when I’ve relapsed, I’ve always forgotten where my addiction has taken me,” she told NBC News. “I get so far away from that miserable state, and that’s when I begin to start relapsing again. So I’m able to always have that picture in my mind and always look back at it to see that that’s always where addiction is going to lead me.”