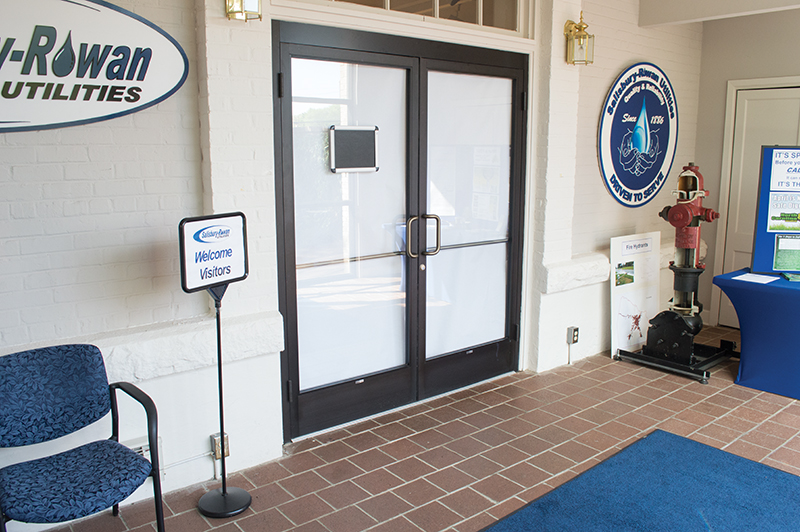 A white wall of paper covers doors where members of a business advisory committee and Salisbury city officials met to discuss the future of Fibrant and listen to presentations from two companies. Josh Bergeron / Salisbury Post

Editor’s note: This column has been edited to remove the inaccurate assertion that Salisbury built Fibrant after the legislature changed the law affecting municipal broadband. The system was already in place.

Don’t you think it is a little strange that after all these years the citizens of Salisbury are finally being asked to vote and decide what needs to happen to Fibrant? It’s disturbing that the citizens don’t really have a choice.

Former Mayor Paul Woodson’s statement that the state of North Carolina prevented Salisbury from expanding Fibrant beyond the city limits is correct. However, the statement is incomplete. … The state changed its policies to prevent cities from going into the broadband business because several cities in North Carolina had tried going into competition with private industry for TV and internet and failed. The state did not want (other cities) to fall into the financially disastrous trap. …

I would love to think that the rental agreement with Hotwire is the answer to the Fibrant problem, but as a citizen, I would like to know what other options were on the table. The past City Council appointed a committee to determine what should be done with Fibrant. What happened to that committee’s report? When the group, met it was done in complete secrecy. I remember the newspaper reporting that all windows and doors were covered so that no one could see who the group was talking with.

Everything was a secret until the city announced its decision to go with Hotwire. We were told that several companies were interested, but we never heard about their offers. Did any company offer to buy Fibrant or offer to buy the Fibrant equipment? We don’t know.

The offer we have from Hotwire certainly does not look like a good deal. Our loan interest rate is going up, and we have no minimum guarantee of rental payment, and we know some folks will lose their jobs. In what world is that a good deal? Was there an offer to buy Fibrant out right? Even at a “fire sale” price, that might be a better option. The point is that we were never shown the options.

Asking the citizens to vote “Yes” to the Fibrant rental agreement is a forced choice. It is as though the city now suddenly wants an “our decision” rather than what we have had, which was a “their decision.” If Hotwire doesn’t work out, and most likely it will not, then the folks who got us into this mess in the first place have an out. The citizens’ “yes” vote gives them a way to save face.

I want to see the city get out of this financial burden as much as anyone, but if I am being asked to vote, I want enough information to make an informed decision. In my opinion, we have not been given enough information or enough options.

Larry Bowyer is a resident of Salisbury.