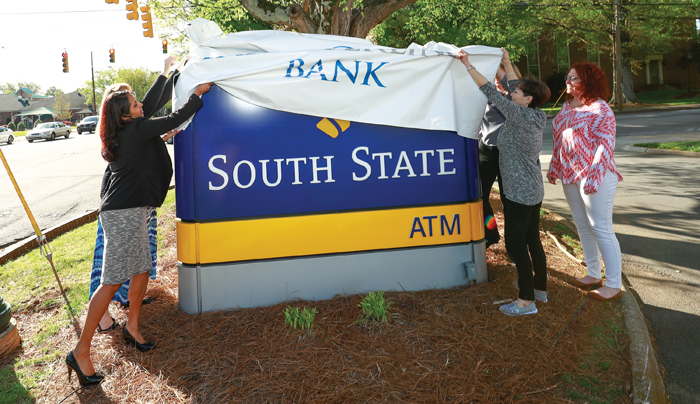 Employees of the former Park Sterling Bank branch at the corner of Fulton and Innes Streets take part in changing the street sign from Park Sterling to South State. All of the employees now work for South State Bank. (Photo by Jason E. Miczek)

SALISBURY — The bank at the corner of Innes and Fulton streets has once again changed hands.

“Salisbury is a great market, and that building, it’s had several iterations of names,” said Bryan Kennedy, North Carolina and Virginia division president for South State Bank. “Now it’s got a name with a $15 million company behind it. And a bank of that size can control its own destiny.”

As a result of the merger, South State Bank added 43 branches. It now has assets totaling more than $14.5 billion and a market capitalization of about $3 billion.

Five of the 43 new locations are in Georgia, 23 are in South Carolina, 17 are in North Carolina and eight are in Virginia. It now has a total of 165 branches and more than 200 ATMs.

Kennedy said South State had to close a number of branches after the merger was completed, but he said Rowan County was “completely spared.”

“We are proud to partner with South State, and this combination will fulfill the vision we laid out in 2010,” said James C. Cherry, CEO of Park Sterling Corp., in a news release. “Together, we have the scale and resources necessary to deliver value-added services to our customers.”

“But I think the biggest thing was what didn’t change,” Kennedy said. “The people behind the counter. The commitment to customers. I think the hallmark of a good merger is what doesn’t change.”

Customers who want to know more about what the merger means for them can visit the South State Bank website.

South State Bank has two locations in Rowan County — the one in downtown Salisbury and one in Rockwell at 106 W. Main St.