WLJZ: The heart and soul of Blue Bear Nation 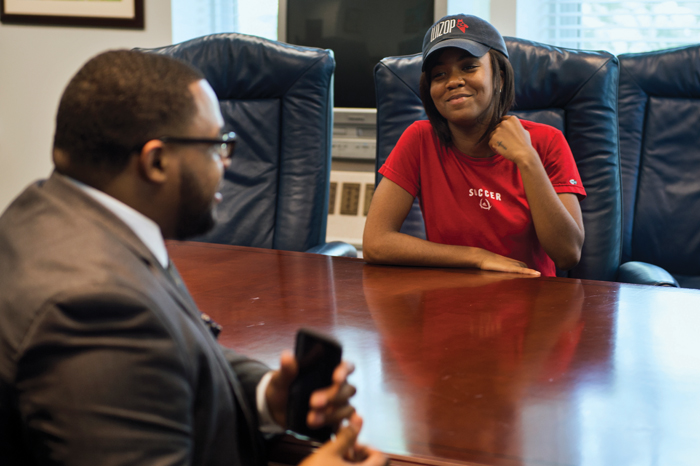 Then the warm strains of Marvin Gaye fill the room. The song is “What’s Goin’ On,” recorded in another era, 1970.

It’s WLJZ, the FM radio station at Livingstone College, and it’s been on the air since November.

WLJZ is an educational, low-power station. Music runs the gamut from “Reggae Boom Boom” to Stevie Wonder. “Loverboy” from the 1980s to the Supremes singing “Up the Ladder to the Roof.”

Justin Walker, 28, heads the station. His main job is handling technology for the school; the radio station is additional work. He’s a 2015 Livingstone graduate and is now working on his master’s degree in health administration.

“Hear that bass line?” he asks, referring to the Marvin Gaye song. “Did you know James Jamerson played it lying on the floor of the studio? He was under the influence, but it was so good, they used it on the first take.”

Walker, a musician himself, knows more about music — and the history of it — than most people will know in a lifetime. He plays “anything brass” as well as bass guitar, standup bass, and a little piano. He worked with a consultant to identify and acquire the necessary equipment and go through the Federal Communications Commission process to open the station.

Now, he selects music for the station, manages the equipment, and oversees student volunteers.

The station was the brainchild of school President Jimmy Jenkins and his assistant, State Alexander. Jenkins was involved in a station startup when he was at Elizabeth City State University and saw the benefits.

“We want our students to be involved,” Alexander says. “We have a recording studio that Mr. Walker is heading up. The goal is to engage students here on campus, to capture their attention. We have some good ideas. Mr. Walker has some fantastic ideas that have leap-frogged us ahead.”

One such idea is The Wall.

“The biggest benefit is an increase in student pride. Students who record ‘a drop’ at the studio get to sign the wall. Now students are asking, ‘How do I get to sign the wall?’ In hindsight, I wish we had done the wall on something we could remove and display rather than a cinderblock wall,” Walker says.

Once students sign the wall, they spread the word to their family and friends.

There are currently about 10 interns and several radio hosts.

“I try to say those things that everyone thinks but no one says out loud,” Warren says.

A recent piece was on procrastination. “The next piece up is about friends who never realize when we just don’t feel like talking, despite all the signals we send out,” she says.

Warren tries to plan her pieces a week in advance, making lists on her phone. She is studying sociology but plans to study mass communication after she graduates. “My friends say this is what I was made for,” she says with a smile.

Another contributor is Livingstone graduate ShaDiamond Jones. Walker saw her fashion videos on YouTube and invited her to contribute fashion tips on WLJZ. Now she’s a regular at 5 p.m. Mondays.

“He thought it would be a great idea for the station, great exposure, and good for the students to see an alumni starting their brand,” says Jones, who lives in the Washington area. “I was honored. I wish we had a station when I was there.”

Jones records her drops on her iPhone and sends the recordings to Walker.

The current tower sends WLJZ’s signal throughout Salisbury. A new tower is in the works that will extend the signal across Rowan County.

Many Salisbury folks have already discovered the station. Walker recalls the story of a stranger approaching him at the grocery store: “We love your station,” he said, and walked away. He is still befuddled as to how the fan recognized him, but he’ll take it.

“I’m glad people are enjoying the music. It brings a sense of community. There will be opportunities for community discussions, to address issues and concerns in the community. It helps all around. We want to be engaged not just in the campus but also in the community.”

As a low-powered station, WLJZ is not obligated to be on the air when students are away, for as many as 10 days. Yet Walker plans to maintain coverage during the summer.

“We want in the long term to develop a communications academic program. It’ll include radio, theater, electronics, and a small TV studio. We have an internal TV station on campus,” he says.

“We want to use the station to strengthen our ties with alumni, as well. The old standard was to communicate with your alumni at least three times a year. That standard is no longer adequate. Now we can communicate real-time.”

Alexander recalls a fond radio moment. His father, a pastor, had a regular show on WAAA in Winston-Salem. One day he took along his son, who was about 7 years old at the time, and allowed him to read on the air.

Because of that, he’d like to open the mike to elementary school students for a similar experience.

Other ideas include inviting professors to play music and explain the different movements: what is happening and why?

The immediate next phase is finding a way for the station to sustain itself, including advertisements and sponsored programming.

For now, though, Alexander is happy with the results.

“The returns are more intangible, but our initial goal was to engage the students, and we’ve definitely done that,” he says.

Listen to WLJZ at 107.1FM or stream online through IHeartRadio.com, TuneIn.com, or livingstone.edu/radio.

“A great man and a great ambassador:” Sports community…