Two Democrats face off for chance to challenge Rep. Budd

Two Democrats are vying for a spot on the November ballot to challenge first-term Republican Rep. Ted Budd to represent the 13th Congressional District.

The seat, which covers parts of Rowan and Guilford counties, all of Davie and Davidson counties, and most of Iredell County, is one highly sought after by Democrats.

In an effort to flip 24 seats nationwide and win back the majority in the House, the Democratic Congressional Campaign Committee communicated plans to flip the district as early as February last year — one month after Budd assumed office.

Budd responded with confidence in 2017, but now he’s campaigning actively against his challengers.

The challengers include familiar face Adam Coker and newcomer Kathy Manning. Both are from Greensboro.

Running in the 13th District for the second time, Coker is a married father of two.

He has experience in banking, marketing and the nonprofit sector. Most recently, he has traveled across the country as a truck driver, using the time to pay off his student loan debt in only a year.

This varied personal experience, he said, makes him a champion for blue-collar America.

“Most of my career has been in blue-collared labor positions,” he said. “I will give a certain confidence to voters that I will be voting with that background, with an eye for how policies affect those citizens living paycheck to paycheck.”

Coker campaigned for the seat 2016, when both he and Budd would be newcomers to public office. In the end, Coker fell short in the Democratic primary by just over 3 percent of the vote.

This year, he said, he wants to make sure that “working people have a voice and a seat at the table.”

“I want to make sure the Democratic Party is voicing that expression clearly,” he said.

On his website, Coker said he was inspired to run for Congress after seeing North Carolinians struggle to make ends meet after the 2008 recession.

“I’ve seen failed leaders who have ignored our most vital needs: jobs, wages, education and foreign policies that benefit Americans and secure our future as a nation,” he said. “Our current representatives in Raleigh and Washington are too focused on partisan politics and on getting re-elected, while ignoring the issues that really matter to their constituents.”

Coker says he sees the same needs across both the 13th District and the nation at large.

“We need to have reform in our country with health care, lowering the costs of prescription medications,” he said. “And we need to expand apprenticeships and paths to trade positions for people. We need livable wages.”

Asked why people should vote for him, Coker said he is the candidate with the most diverse background. That, he said, gives him a pivotal perspective of life in the 13th District

“I could address the challenges in both rural and urban counties,” he said. “From farmers in Iredell County and Davidson County to issues facing Lake Norman and Greensboro, I’ve come into contact with it all.” 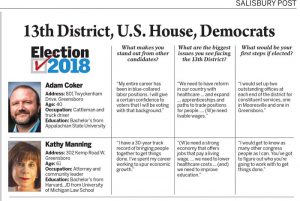 Manning, who is making her first run for public office, said the decision was personal. When her adult daughter was diagnosed with a chronic illness, the insurance company seriously delayed a necessary prescription that would allow her daughter to function.

“I have talked to people across the district,” Manning said. “As I talk about my experience, people come up and I can’t tell you how many people have these same issues.”

“We need a strong economy that offers jobs that pay a living wage,” she said. “Too often we see families working hard that can’t afford to put a roof over their head, food on their table. They can’t save for retirement or their kids’ education.”

In terms of improving education, she said students should be taught the skills needed to do the jobs of today and of the future.

These issues, she said, resonate no matter where one lives in the country.

“People are just disgusted when they see what is going on in Washington,” she said. “Our representatives are putting partisan politics over the needs of everyday people.”

If elected, she said her first steps would include getting to know as many of her fellow Congress members as possible to figure out who she’s going to work with to “get things done.”

Manning said her 30-year track record of bringing people together to get things done, as well as a career spent working to spur economic growth, sets her apart from other candidates.

“I have worked hard,” she said. “I have taken on tough assignments, and I have seen them through to the end. That demonstrates I’m going to be in there fighting for people and I’m going to get things done.”