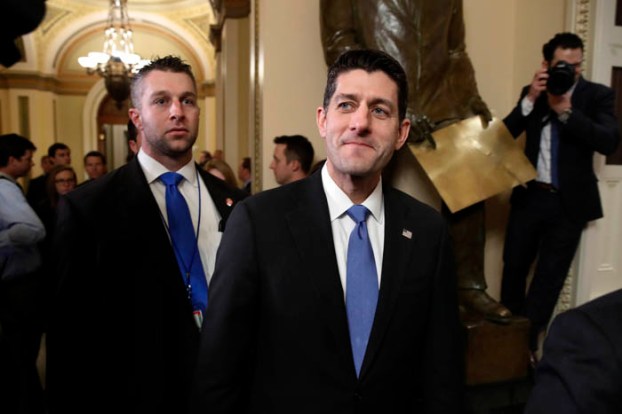 House Speaker Paul Ryan of Wis., center, leaves the House Chamber after voting on the Republican tax bill, Tuesday, Dec. 19, 2017, on Capitol Hill in Washington. Republicans muscled the most sweeping rewrite of the nation's tax laws in more than three decades through the House. (AP Photo/Jacquelyn Martin)

Al Hunt: Paul Ryan has had enough, for now 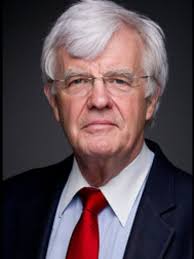 Paul Ryan didn’t want to be speaker of House. He grew to hate the job when serving with President Donald Trump.

The 48-year-old Republican’s announcement on Wednesday that he wouldn’t seek re-election to the U.S. House of Representatives in November didn’t come as a huge surprise. He became speaker in 2015 only because he was an acceptable compromise between warring Republican factions. A policy wonk, he’s not a skillful political operative.

But the move has negative consequences for House Republicans. Ryan was the party’s most prodigious fundraiser; as a lame duck, his ability to attract donations will be significantly diminished. And the battle for succession has already started, aggravating party division in a year when it faces the probability of big losses in the midterm elections.

There were compelling political reasons for Ryan to bow out. He faced his most serious challenge since he was first elected in his Republican-leaning Wisconsin district in 1998. One Democratic opponent, ironworker Randy Bryce, already has raised $5 million and Wisconsin Republicans are worried that a national Democratic wave could sweep him to victory.

That’s also true elsewhere, and Republicans fear losing their House majority. House Republicans tend to replace their leaders after disappointing elections, though in this case much of the blame should fall to Trump.

Despite periodic efforts to gloss over big differences, Trump and Ryan never were a match. Ryan was a protege of the late Jack Kemp, the quarterback-turned-legislator who was the prime advocate starting in the 1970s and 80s of an opportunity-based, inclusive and tolerant Republican conservatism. Other than the tax cut passed last year, Ryan’s only real achievement, he was AWOL on the Kemp agenda.

On immigration, trade and fiscal policy, Ryan was at odds with the Trump. He especially was bothered by the president’s race-baiting and misogyny, but lacked the political will to make more than token objections.

The Trump factor often made running the House impossible. Unlike strong speakers from Sam Rayburn to Thomas P. O’Neill to John Boehner and Nancy Pelosi, Ryan was never feared by his colleagues and they had few reservations about taking him on.

And there was little on the legislative agenda for the rest of this year. Even if the Republicans retain a slim majority next year, Ryan’s longstanding ambition to cut back on entitlements like Social Security, Medicare and Medicaid is a non-starter.

Before Wednesday, it was widely assumed among some Ryan confidants that to preserve his standing and to raise lots of money for embattled House Republicans, he’d run for another term, then win and retire.

The front-runner to lead House Republicans is House Majority Leader Kevin McCarthy, though his rise is far from certain. The Californian began as the favorite for the speaker’s job when John Boehner quit in frustration in 2015, but was thwarted by personal problems and criticism from his party’s right wing.

McCarthy has worked hard to make peace with right-wing factions and has become fairly close to Trump. Other contenders would be the current whip, Representative Steve Scalise of Louisiana, and North Carolina Representative Patrick Henry. Others may emerge.

It is indicative of Trump’s impact on the Republican Party that Ryan, the vice presidential nominee in 2012, now faces an uncertain political future only two years after being considered a rising star.

Friends say he will bide his time and see whether the political climate and party change. Associates doubt he would challenge Trump in 2020.

But in 10 years, for the presidential election of 2028, he would be 12 years younger than Trump was when elected.

Boycotts, speech and the government

From a column by The Rev. Byron Williams on politicsnc.com: A 2015 survey conducted by the Annenberg Public Policy Center... read more